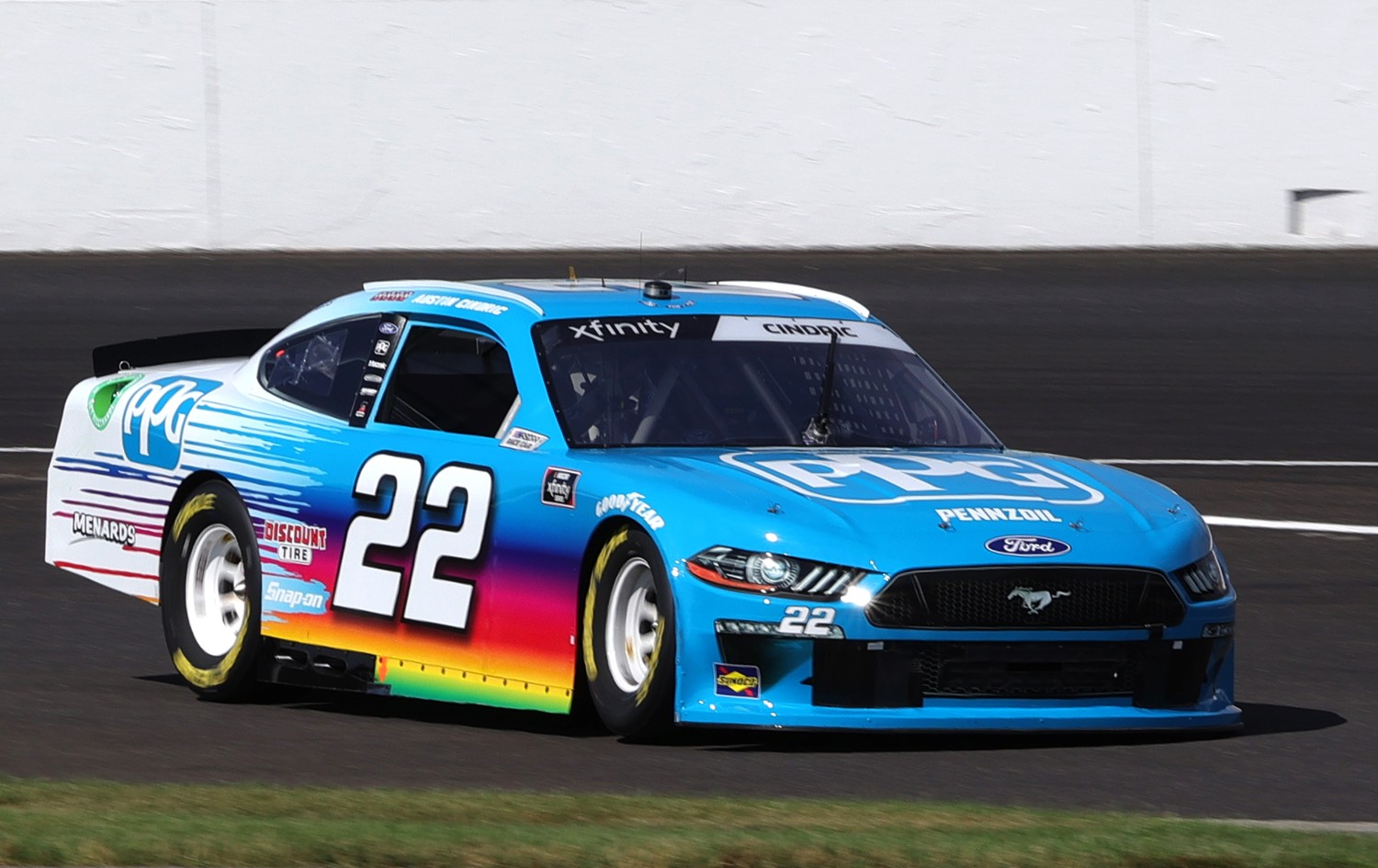 INDIANAPOLIS – It was essentially a storybook ending for Austin Cindric Saturday afternoon in the Pennzoil 150 at the Brickyard and the 22-year old with Hoosier roots appropriately celebrated his first win at the renowned Indianapolis Motor Speedway Road Course by singing “Back Home Again in Indiana” as he took a victory lap.

Cindric easily out-paced the NASCAR Xfinity Series field by 2.108-seconds to take his series best fifth victory of the year and 13th of his career. It marked the second win on the day for the Team Penske Racing, which won an NTT IndyCar race earlier at the renowned Indianapolis facility now owned by Roger Penske himself.

The president of Team, Penske, Tim Cindric, met his son in Victory Lane to celebrate – hugs, high-fives and pat-on-the-backs everywhere. Indiana is the Cindric family home for generations.

“To win at this facility is amazing,” Cindric said, adding, “What this place means to me, I can’t even put into words what this means.

Cindric led a race-best 29 of the 62 laps on the 14-turn, 2.439-mile Indianapolis road course, taking the lead for good with 17 laps remaining and pulling away to a nearly four-second advantage at one point. Polesitter and Stage 2 winner A.J. Allmendinger finished runner-up for the second consecutive week at a road course track.

Reigning NASCAR Cup Series champion Chase Elliott rallied to a fourth-place finish despite finding out only hours earlier that he would substitute for Michael Annett, in the JR Motorsports No. 1 Chevrolet so Annett could continue recovering from a leg injury.

“I was actually still asleep this morning when I got the call,” Elliott said, noting that when he saw Hendrick Motorsports Vice President Chad Knaus had called, he momentarily worried he’d slept through NASCAR Cup Series practice and was getting fired.

Instead he rallied to an impressive finish and got some time on the track in advance of Sunday’s NASCAR Cup Series race.

That was an important finish for Herbst, who entered the 13th in the championship, one position outside the Playoff hunt. His work – which included 11 bonus points in the stage finishes – was good enough to move up into that 12th position, 10 points ahead of Annett.

The other two drivers still in Playoff contention with only two races remaining to set the 12-driver field, Brandon Brown and Ryan Sieg, both had troubles Saturday. Brown was scored 34th of the 36 cars and did not finish after his car suffered damage in a first lap incident. Sieg spun out in the opening laps then had a tire go down later in the race, finishing 32nd. They are now -41 (Brown) and -73 (Sieg) points behind Herbst.

Burton’s top-10 result was also impressive considering he was among eight drivers who got caught up in a first lap mishap – cars going airborne as they ran over a “speed bump” on the track’s outside skirt. Lally, an IMSA WeatherTech SportsCar Championship star and the 2011 NASCAR Cup Series Rookie of the Year, has made only four previous starts on the season and now has a pair of top 10s.

Certainly, however, the day and the moment belonged to Cindric who ran his fastest laps of the race in the final few circuits – the victory one of the most cherished moments in his young career.

“It’s a racer’s dream,” Cindric said. “It’s not the win, it’s getting to compete. I think everyone that walks into this place knows what this means.”