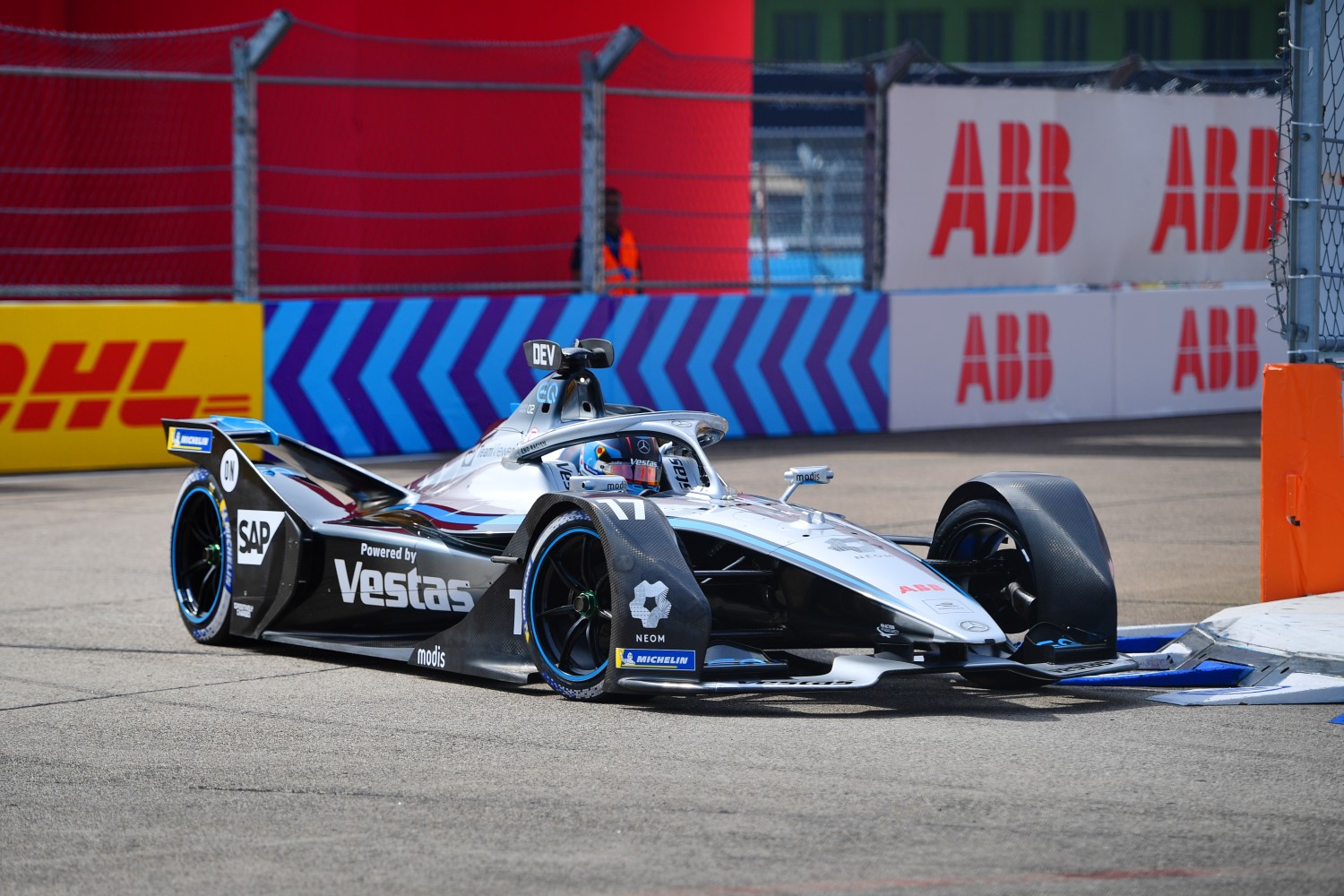 This rumor is upgraded to ‘fact’ today. Don’t stick a fork in Formula E just yet, but it could soon be done. Hardly any race fans wants to watch silent race cars. The whine of the transmission just isn’t exciting.  Sounds like our electric golf cart.

Mercedes-Benz today announced that it will conclude its ABB FIA Formula E success story as a team entrant and manufacturer at the end of Season 8, in August 2022.

Since HWA Racelab first took to the track in Season 5, laying the foundations for Mercedes’ Formula E entry, the goal has been to create a benchmark team at every level. A first Mercedes win for Stoffel Vandoorne in the final round of Season 6 was followed by a strong start to Season 7, setting up the team’s championship challenge in only its second season. This culminated last weekend in Berlin when Nyck de Vries and the Mercedes-EQ Formula E Team became the first ever all-electric motorsport world champions, by winning the ABB FIA Formula E World Championship Drivers’ and Teams’ titles.

In parallel, Mercedes-Benz made the strategic announcement in late July that the brand will be ready to go all-electric at the end of the decade, where market conditions allow.

As part of the new strategic direction, the brand has deliberately chosen to shift resources for this accelerated ramp-up of electrification, including the development of three electric-only architectures to be launched in 2025. Therefore, Mercedes will reallocate resource away from its ABB FIA Formula E World Championship programme and towards applying the lessons learned in competition to product development in series.

Moving forward, the company will concentrate its works motorsport activities on Formula 1, reinforcing the sport’s status as the fastest laboratory for developing and proving sustainable and scalable future performance technologies.

This learning will be brought to life through future product architectures like the AMG.EA platform, the dedicated performance vehicle electric platform that will be launched in 2025, and projects such as the Vision EQXX.

While Mercedes-Benz will depart Formula E at the end of Season 8, the team’s leadership group has begun exploring options for the team to continue competing in the series during the Gen 3 era, including a potential sale to new owners.

Markus Schäfer, Member of the Board of Management of Daimler AG and Mercedes-Benz AG; responsible for Daimler Group Research and Mercedes-Benz Cars COO
At Mercedes-Benz, we have committed ourselves to fighting climate change at full force in this decade. This demands the accelerated transformation of our company, products and services towards an emission-free and software-driven future, and to achieve this, we must give full focus to our core activities. In motorsport, Formula E has been a good driver for proving our expertise and establishing our Mercedes-EQ brand, but in future we will keep pushing technological progress – especially on the electric drive side – focusing on Formula One. It is the arena where we constantly test our technology in the most intense competition the automotive world has to offer – and the three-pointed star hardly shines brighter anywhere else. F1 offers rich potential for technology transfer, as we can see in ongoing projects such as the Vision EQXX, and our team and the entire series will achieve net-zero status by the end of the decade.

Bettina Fetzer, Vice President Marketing, Mercedes-Benz AG
Over the last two years, Formula E has enabled us to showcase the Mercedes-EQ brand in a highly endemic and truly innovative format. On a strategic level, however, Mercedes-AMG will be positioned and strengthened as our performance brand through its close alignment to our record-breaking Formula One team, and F1 will be our company’s works motorsport focus for the years ahead. We wish the Formula E championship, its stakeholders and its innovative format only the best for the future as it continues to grow, and we hope the series has a bright future.

Ian James, Team Principal, Mercedes-EQ Formula E Team
We have been extremely fortunate to enjoy the support of Mercedes-Benz in building a class-leading Formula E operation over the past few seasons. I would like to thank the company for its trust and support in our journey so far – and all the way through to what we hope will be a successful conclusion to Season 8 with a strong championship challenge. Although Mercedes-Benz has decided to leave, we recognise the value and power of Formula E; therefore, we will be exploring the best options for the team to continue competing beyond Season 8.

Toto Wolff, Head of Mercedes-Benz Motorsport & CEO, Mercedes-EQ Formula E Team
We entered Formula E with an open mind about the series and its innovative approach to motorsport. A lot of hard work went into building the team and making it competitive – and we have seen an incredible group of talented women and men deliver at the highest level. We can be proud of our achievements and especially the double world championship won last weekend in Berlin, which will stand as an historic milestone in the long motorsport history of Mercedes-Benz. We will be giving everything to make sure that we finish our Formula E adventure in style in Season 8.

Mercedes has not yet announced it will join Audi and BMW in quitting Formula E, but rumor has it they will in the next 30 days.

Mercedes is preparing to leave Formula E at the end of the 2022 season rather than invest in the Gen3 car.

Mercedes will join fellow German brands Audi and BMW in leaving the new world championship as an official manufacturer next summer, sending the series reeling.

Speaking to selected media at the Berlin E-Prix on Sunday, Mercedes’ Toto Wolff confirmed that a decision had recently been made, but would not explicitly disclose exactly what it was.

“The decision has been taken, but we’re not going to communicate anything, let’s say today,” said Wolff.

He called the reasoning over Mercedes’ Formula E future “an internal thing that we need to understand for us”.

Wolff added: “Does this work or not? And if you say, ‘yeah, it does work,’ then you can still go and speak with the series and say, ‘we believe that this needs to change’ and ‘we believe that qualifying groups shouldn’t cause so much variability and unpredictability.’

“Whatever our input is, and they can listen, take it on board or not.

“But it’s mainly for us making up our mind what we want to do in terms of motor racing going forward.”

Losing your 3 biggest manufacturers within a year of each other makes a real statement – fans don’t want to watch ‘green’ silent race cars.

If all race series move to electric engines, by say 2030, they will all die and the sport will cease to exist.

One thought on “Rumor: Mercedes to join Audi and BMW and quit Formula E (Update)”