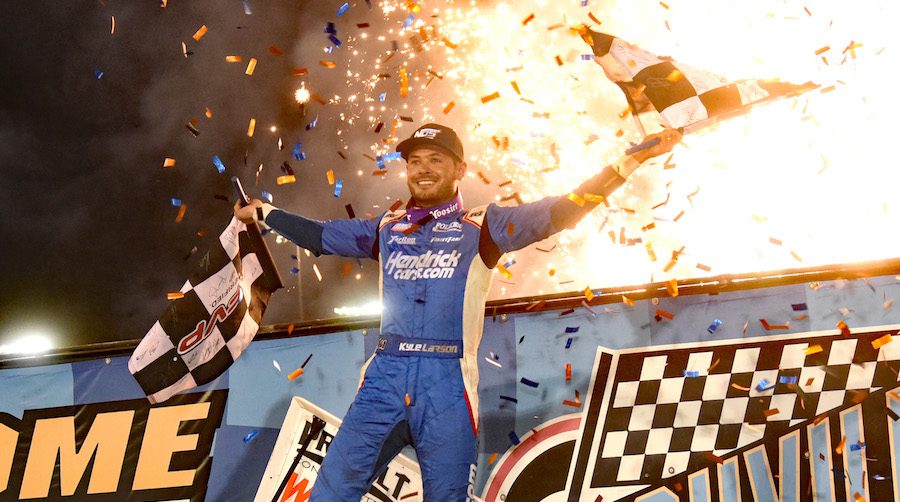 Kyle Larson has sent the moronic snowflake ‘cancel culture’ reeling once again.  They tried to destroy his career, but week in and week out, Larson proves he is the most talented American race car driver of this era.

This has been quite a week for Larson. He won last weekend’s Cup race at Watkins Glen International, and he won another Sprint Car race on Monday night.

The win was the biggest remaining bucket list win for Larson outside of NASCAR. He won the Chili Bowl Nationals (2020 and 2021) and King’s Royal (2021).

For the first time in his career, @KyleLarsonRacin is a #NOSvilleNationals champion! pic.twitter.com/H0NAUf9ebL

Larson rode low to pass Schatz for second on the same lap, and Sweet moved by Gravel for fourth on lap nine. Schatz would catch fire at that point, however, getting back by Larson on the low side for second on lap ten and carrying his momentum to take the lead from Scelzi on lap 11.

Larson followed him by celzi to take second on lap 13, as the leaders cruised behind traffic. Nearing the halfway mark, Gravel and Sweet battled for fourth, with Brent Marks close behind.

Up front, Larson rode the cushion around Schatz to lead lap 25. Schatz came right back on the 27th lap and rode the cushion past Schatz in turn two. The pass was negated when the mandatory pit stop yellow flag was thrown.

With 24 laps to go, Larson led the pack ahead of Schatz, Scelzi, Gravel and Marks. Rico Abreu spun when a group of cars in front of him tangled. He pulled in shortly thereafter. On lap 29, Brian Brown jumped the turn one cushion, getting upside down. The incident collected Tyler Courtney and Cory Eliason. Brock Zearfoss suffered damage, and Sheldon Haudenschild flattened a right rear, but both restarted at the tail.

Gravel grabbed third from Scelzi on the restart, and Sweet followed him into fourth on lap 31. At that point, Gravel’s mount went up in smoke and pulled to the infield.

Larson built a lead over Schatz out front as rubber began to develop a car length down from the cushion. Eventually, the groove moved down low on the track, and Schatz reeled in the leader. He appeared to be faster in three, and threw the Tony Stewart Racing #15 a little higher to attempt a pass that fell short. One more try on the white flag lap also failed to work.

Several awards were handed out during the night as well (complete list below).

“Gosh, I’ve always dreamed of winning this race,” said an emotional Larson in Victory Lane. “This atmosphere this week was unbelievable. I think a year off last year made the roof explode! I felt the energy all week, and that kept me pumped up. Honestly, this is as nervous as I’ve been leading up to a race in a couple of years. I had butterflies all day today. During Cup practice (at the Indianapolis Motor Speedway), it was all I could think about. (Owner/Crew Chief) Paul Silva is the best there is. I wanted to get the lead before the halfway point. I looked at the board and I knew we were coming down to the end of it. I decided to blitz it, and I pulled it off. (Schatz) actually got back by me before that caution came out. After the yellows, I just didn’t know what to do. I was watching the big screen and it was taking rubber. I got behind Shane (Stewart) and I kind of settled in. I could see Donny was taking huge chunks out of my lead lap after lap. He was on my rear bumper and I just told myself, ‘I know he’s here, just don’t miss it.’ It was great to beat Donny here for the Nationals. He beat me a few years ago, and he’s the best there is.”

“I gave it everything I had,” said Schatz. “I was kind of surprised when the racetrack changed like that, but it did. We just had to change with it. I seen (Larson) get to the bottom, and I thought there was no way there was rubber down there. Sure enough, it was kind of chalked up. I got closer to him and the laps wound down. I thought the lapped car was going to hold him up so I smoked it up into three. I gave it the old ‘Hail Mary!’ It didn’t quite come out in the spot I wanted. It’s good to come here and have a decent run. Kyle’s been knocking on the door of this forever, and he’s definitely a ‘one-off’ talent. If we ever see anything like that in our lifetime again, I guess it will be pretty rare. It feels good to be back here with all the fans.”

“I gave a little too much track position the first 25 laps,” said Sweet. “I didn’t get a very good start and the track was a little crumbly up top after the track rework. We had to work our way back up there, and once we got to third, I felt we could pace Donny. Kyle was kind of out. We searched the racetrack and found some rubber in spots. Luckily, we brought it home third and we can’t complain. Hat’s off to Kyle and Donny. I felt like we had a really good car. It was just going to be tough driving up by Donny and Kyle.”