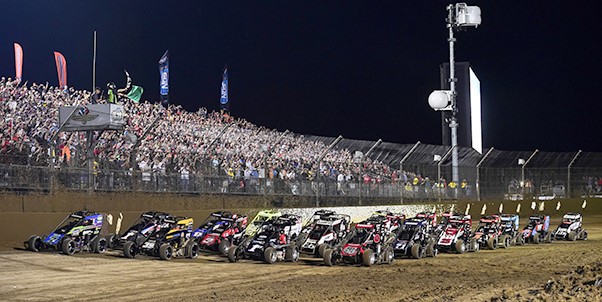 There will be serious star power Aug. 17-18 at The Dirt Track at IMS, as top drivers from the United States Auto Club, NASCAR and INDYCAR will compete in the third Driven2SaveLives BC39 Powered by NOS Energy Drink USAC NOS Energy Drink National Midget Championship race.

This year’s entry list includes 72 drivers aiming to earn $15,000 and heaps of prestige for winning the 39-lap feature race Thursday night on the quarter-mile dirt oval inside Turn 3 of the famed IMS oval. The popular event, which resumes after a one-year hiatus due to the COVID-19 pandemic, starts Wednesday, Aug. 17 with hot laps, heat races and the 25-lap Stoops Pursuit race.

Larson won the prestigious Knoxville Nationals last Saturday night and finished third in the Verizon 200 at the Brickyard on Sunday on the IMS road course, and he will attempt to repeat as Stoops Pursuit champion and take the checkered flag in the feature of this event for the first time.

Those drivers will take on a lineup of USAC’s best, including 2018 BC39 winner Brady Bacon and 2019 winner Zeb Wise, who also won the Stoops Pursuit in the inaugural event in 2018.

The BC39 also has drawn two drivers from New Zealand, Glenn Waterland and Hayden Williams.

USAC National Midget Championship leader Buddy Kofoid will race in the BC39 for the first time, trying to pad his points lead. This also will be the first BC39 for 2016 Midget national champion Thorson, who has six victories this season.

Elliott and Newman bring varying levels of USAC experience into their first respective attempts at the event. Elliott has competed in three USAC National Midget events this season as he embraces dirt racing more and more, while 1999 USAC Silver Crown champion and Indiana native Newman will return to his roots, as he was a 13-time USAC National Midget feature winner in his illustrious short-track career before he climbed to NASCAR.

The BC39 event on the quarter-mile dirt oval inside Turn 3 at IMS will continue to honor late USAC champion and three-time Indianapolis 500 starter Bryan Clauson and increase awareness of and participation in the Indiana Donor Network and Driven2SaveLives.

On-track action for the BC39 begins Wednesday, Aug. 18, starting with practice at 5 p.m. (ET) and opening ceremonies at 6:30 p.m. Heat races begin at 7:15 p.m., with the exciting Stoops Pursuit feature race concluding the night’s action at 8 p.m.

As a part of his duties, Gordon will wave the green flag for the Stoops Pursuit. He also will turn exhibition laps in a Clauson Marshall Racing USAC Midget car in front of the crowd, something he hasn’t done in nearly 30 years.

Thursday’s action starts with practice at 4:30 p.m., with qualifying races at 5:30 p.m. Opening ceremonies are scheduled for 7 p.m., immediately followed by the main feature events, starting with multiple 12-lap D-Mains, the 15-lap C-Main, the 20-lap semi-feature and the 39-lap main event.