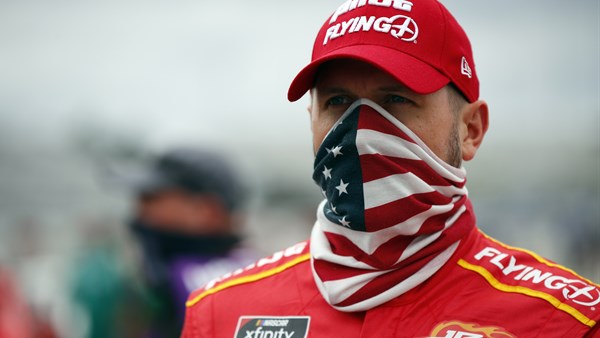 Michael Annett (shown above) will miss this Saturday’s NASCAR Xfinity Series race at Michigan International Speedway as he continues to recuperate from recent leg surgery, JR Motorsports announced today. Josh Berry, who previously stepped in for Annett at New Hampshire Motor Speedway, will take over the driving duties of the No. 1 Pilot Flying J / Trucking Moves America Forward Chevrolet this weekend.

Annett initially missed the race at Atlanta Motor Speedway (July 10) due a stress fracture in his right femur before having successful surgery to repair it on July 12. The 35-year-old also sat out at New Hampshire (July 17) the following week as he recuperated. Annett was medically cleared by NASCAR to return to the driver’s seat at Watkins Glen International (Aug. 7), where he earned an 11th-place finish. Last week at the Indianapolis Motor Speedway Road Course, recovery issues again sidelined the Iowa native. Chase Elliott substituted and drove to a fourth-place finish.

“Honestly, I was still pretty sore driving at Watkins Glen,” Annett said. “But I just wanted to be there for my guys and our Pilot Flying J team, and I may have been a little too eager to get back in the car. This time around, we’re going to take it slower and make sure I’m 100 percent. The plan is to take it one week at a time.”

For Berry, this will mark his first start at the 2-mile oval in Michigan’s Irish Hills. He finished eighth in his previous outing with the No. 1 Pilot Flying J / Trucking Moves America Forward entry. The New Holland 250 will air on Saturday, Aug. 21 at 3:30 p.m. ET on NBCSN.