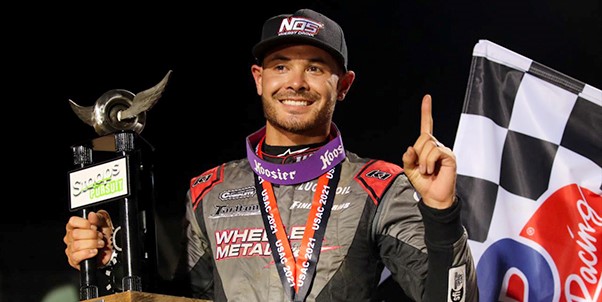 In an action-packed, elimination-style exhibition race, NASCAR Cup Series star Kyle Larson captured the lead late Wednesday and won the Stoops Pursuit race at The Dirt Track at IMS on the opening night of the Driven2SaveLives BC39 Powered by NOS Energy Drink.

Larson passed 15 cars in the 25-lap race and won $3,000. It’s the second consecutive Stoops Pursuit race that Larson has won at IMS. He captured the event in 2019 by prevailing after getting tangled in a thrilling, last-lap, last-corner collision.

The victory also continued a year of domination of short-track racing’s biggest events by Larson, who also has won the Knoxville Nationals, Chili Bowl, Kings Royal and Prairie Dirt Classic in 2021.

“There’s a lot that happens in that race,” Larson said. “It’s hard to keep track of where you’re running and where you need to finish and stuff like that and trying not to be too aggressive in those earlier rounds. (Justin) Grant was really good. I knew that if he just passed people, he was going to eliminate cars in front of us. It kind of worked out, and a couple mistakes in front of me allowed me to get the win.”

Larson lurked all race long, slowly making his way toward the front in the race that rewarded passing and punished those who lost their spot. The Stoops Pursuit format splits the 25-lap race into five five-lap segments. Every five laps, USAC threw a competition caution, and cars with a net loss in position were removed from the race.

Larson started 16th, and by the start of the final segment, he was third behind leader Kyle Cummins and Justin Grant. As Larson inched his way closer to Grant’s No. 7 midget, Grant tapped the wall exiting Turn 4 and allowed Larson to advance to second.

Shortly thereafter, Larson closed in on Cummins. With a mirror full of Larson, Cummins slid sideways at the exit of Turn 4 coming to the white flag. The spin caused a caution, giving Larson the lead and erasing any chance Cummins had at scoring the win.

“It would’ve been tough to get by him with the line that he was running, but I put a couple good corners together there to track him down a little bit,” Larson said. “Then, he just over-rotated there. I got lucky, for sure.”

The prestigious event attracted several NASCAR and INDYCAR stars to IMS for one of the richest USAC prizes of the season. NASCAR Cup Series rookie and Hoosier Chase Briscoe ran as high as second in the Stoops Pursuit but eventually finished eighth in the No. 5B.

Renowned USAC, INDYCAR and NASCAR driver J.J. Yeley finished seventh in the No. 51, while NTT INDYCAR SERIES driver Conor Daly finished 13th in the No. 47D. 2013 Brickyard 400 winner Ryan Newman finished 21st in the No. 6BC in what was his first USAC National Midget appearance in 22 years, and defending NASCAR Cup Series champion Chase Elliott finished 26th in the No. 9.

The race got off to an intense start in Turn 2 on the very first lap. Aiden Purdue got sideways off the right front tire of Briscoe and spun. The incident created an 11-car pileup that included Purdue, Corey Day, Kaylee Bryson, Spencer Bayston, Chris Windom, Elliott, Logan Seavey, Ryan Timms, Thomas Meseraull, Newman and Buddy Kofoid. 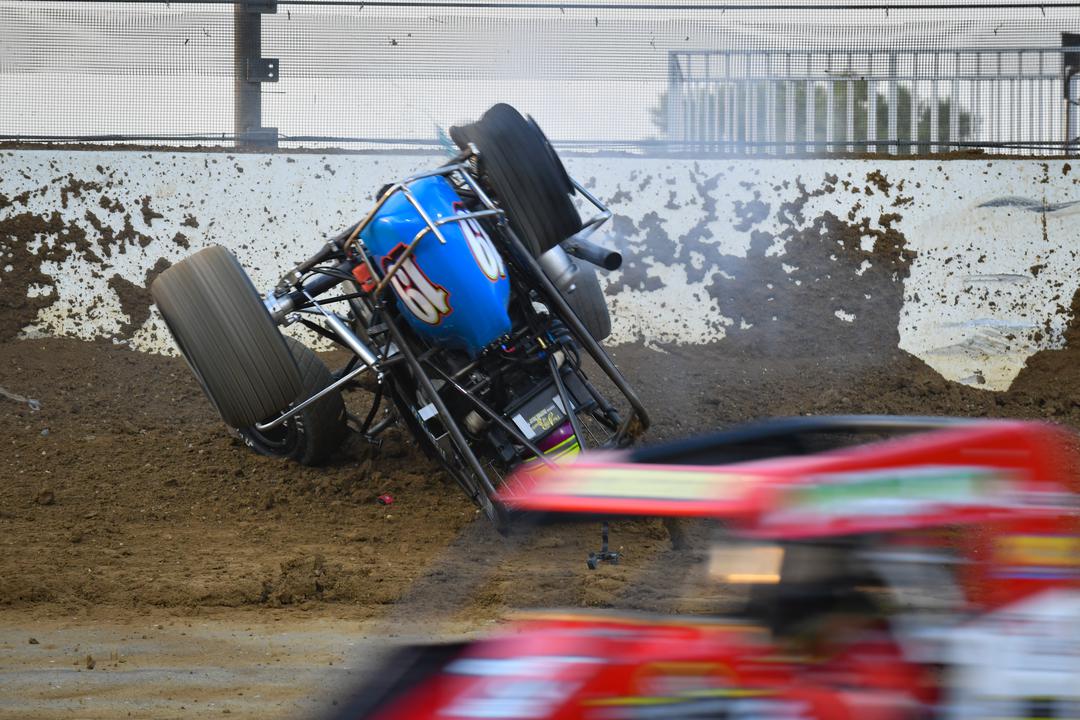 The Stoops Pursuit capped off an exciting first night of grassroots racing at the Racing Capital of the World. The evening began with hot lap sessions, followed by heat races, which help set the field for Thursday’s qualifying.

The night was punctuated by NASCAR Hall of Fame driver Jeff Gordon, who served as the honorary starter for the Stoops Pursuit. Gordon also turned exhibition laps in a Clauson-Marshall Racing USAC Midget in front of the passionate short track racing fans, which he hadn’t done in 30 years, as well as waving the green flag to begin the Stoops Pursuit race.

“I’m just so thankful and thrilled for Clauson Marshall Racing and Driven2SaveLives for making this all happen, as well as IMS, and mainly all the fans for coming out and supporting dirt tracks and short track racing,” Gordon said. “That was a lot of fun.

“This is a challenging racetrack. I have a whole different perspective for these drivers right now. That cushion is real. That’s not a cushion; that’s a wall. I wasn’t going to leave here if I didn’t put that right rear on the cushion.”

Fittingly, Gordon was so excited about his role that he stayed for the entire event and waved the checkered flag to crown Larson the winner. Larson drives for Hendrick Motorsports in the NASCAR Cup Series, where he has five wins this season at the team with which Gordon earned 93 wins and four Cup Series championships.

Next year, Gordon will move into a leadership role at Hendrick Motorsports as the organization’s vice chairman. But before he does that, Gordon was surprised with a special announcement in front of the Shaw Grandstands after his exhibition laps.

The Driven2SaveLives BC39 Powered by NOS Energy Drink continues Thursday with another jam-packed day of racing at The Dirt Track at IMS. Public gates open at 4 p.m., with hot lap sessions starting at 5 p.m.

Qualifying races begin at 6 p.m., and Main races at 7:45 p.m. will whittle the massive field of 72 cars down to 26 starters for the 39-lap feature event honoring the late Bryan Clauson, which begins at 9:30 p.m.

Tickets are still available at IMS.com and at the gates. All Shaw Grandstand seats are reserved, and tickets start at $44.