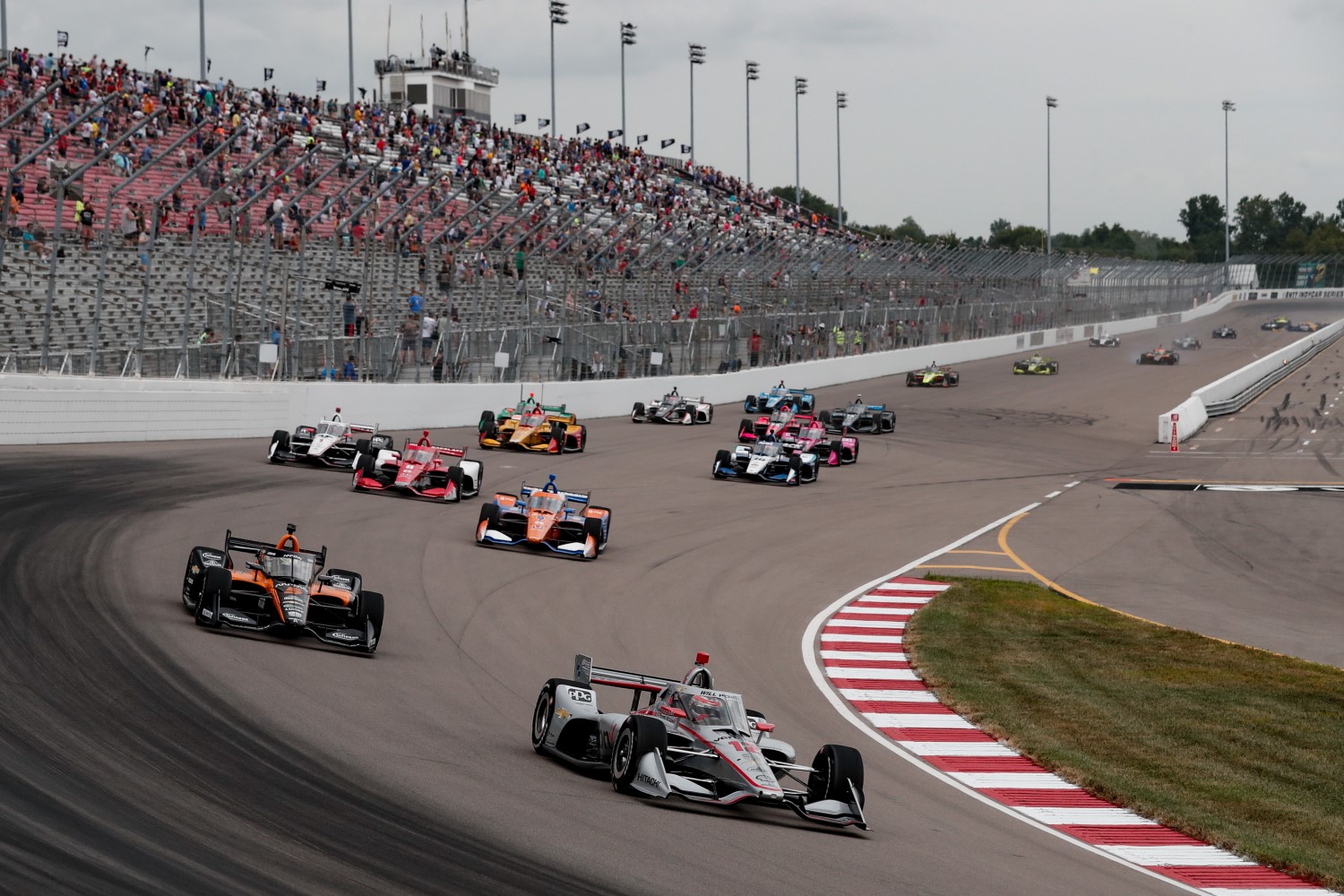 Since opening in 1997, World Wide Technology Raceway has been a racetrack of INDYCAR’s elite, with all 12 races won by drivers who had either won a series championship (or soon would) or an Indianapolis 500.

Whether that trend continues Saturday night is to be determined, but it is a fact too significant to discount when sizing up the 24-car field. Position is everything. It’s a single file follow-the-leader racetrack. Whoever gets out front after the final pitstop, will be hard to beat.

Josef Newgarden (No. 2 Sonsio Team Penske Chevrolet) and Scott Dixon (No. 9 PNC Bank Grow Up Great Honda of Chip Ganassi Racing) not only have combined to win the past four series championships, they were the race winners in last year’s doubleheader at this 1.25-mile track in Madison, Illinois. Newgarden also won the 2017 race, making him the track’s winningest INDYCAR driver.

Thus, the Bommarito Automotive Group 500 presented by Axalta and Valvoline (8 p.m. ET, NBCSN and the INDYCAR Radio Network) sets up well for the two veterans as they try to claw their way back into title contention. With four races remaining, Dixon is third in the standings, 34 points behind series leader and Ganassi teammate Alex Palou (No. 10 The American Legion Honda). Newgarden occupies the position behind Dixon, 55 points out of the lead.

With the right set of circumstances, Palou is susceptible to losing as many as 48 points to another driver in this race. Something similar nearly happened in last week’s Big Machine Spiked Coolers Grand Prix on the Indianapolis Motor Speedway road course when mechanical failure caused Palou to finish 27th of the 28 car-and-driver combinations. In other words, another shakeup is possible this weekend.

Second-place Pato O’Ward (No. 5 Arrow McLaren SP Chevrolet) enters this event 21 points out of the lead. His fifth-place finish at IMS, coupled with Palou’s trouble, cut 27 points out of his deficit and intensified the championship pursuit. Marcus Ericsson’s ninth-place finish in the No. 8 Huski Chocolate Honda of Chip Ganassi Racing drew him to within 62 points of the lead, increasing the chances of five drivers being in this title showdown.

Saturday’s race is the last oval event and final night race of the season. The final three races – Sept. 12 at Portland International Raceway, Sept. 19 at WeatherTech Raceway Laguna Seca and Sept. 26 on the streets of Long Beach, California – will be staged on permanent road courses or temporary street circuits.

Despite all the success of veteran drivers at this venue, an intriguing subplot of this event is Romain Grosjean’s oval-track debut.

The 10-year veteran of Formula One’s road racing series entered his first INDYCAR season wanting to take a wait-and-see approach to the ovals. Initially, he decided to sit them out, but with World Wide Technology Raceway being a short track and Grosjean now familiar with INDYCAR’s safety elements, he decided to give oval racing a go. He said he felt comfortable during last month’s test at the track.

“I want to see how it’s going,” Grosjean said of oval racing. “Everyone (in INDYCAR) seems to be enjoying ovals. I still prefer road courses (because) I like braking late. But I’m looking forward to it and seeing what we can get out of it.”

Grosjean drives the No. 51 Nurtec ODT Honda of Dale Coyne Racing with RWR, which is basically the same entry Santino Ferrucci piloted in his INDYCAR oval-track debut in 2019. Ferrucci posted top-10 finishes in three of his four oval races that season, including a fourth-place finish at Gateway. Last year, Palou showed well with this organization in the first four short-oval races of his career, posting an average finish of 13.0 at this track and Iowa Speedway.

Point being, team owner Dale Coyne has had success bringing along oval-track newcomers. Grosjean hopes to be the latest.

“There is not much room for mistake, and that’s something you need to keep in mind rather than just trying to go (all out) straight away,” Grosjean said.

Power is one to watch this weekend as he regained his mojo last weekend at IMS, earning his first victory of the season to extend his streak of winning seasons to 15 (second only to Dixon’s record 17). The 40th victory of his INDYCAR career moved Power ahead of Al Unser for sole possession of fifth place on the sport’s all-time chart. Power is just two race wins from matching Michael Andretti for fourth place.

Power not only has won at Gateway, he also will be INDYCAR’s defending champion at Portland, and he is a two-time Long Beach winner. In terms of title hopes, Power is too far in arrears – 137 points in the ninth position – to capture his second championship, but if he is indeed back in the groove, he could be an obstacle for those still in title pursuit.

“Winning is absolutely what makes me happy,” he said. “I’m very moody when I haven’t won for a while. Just ask my wife.”

O’Ward wasn’t eager to celebrate a fifth-place finish at IMS because Palou was ahead of him at the time of his mechanical trouble.

But O’Ward didn’t apologize for slicing his deficit by more than half because bad luck befalls every competitor at some point.

“It was very unfortunate for (Palou), but he hasn’t had bad luck at any point in the season – we have,” O’Ward said. “In racing, it doesn’t exist to have (good) luck in every single race. That doesn’t exist.”

O’Ward likes how the rest of the schedule shapes up for him. He finished third and second, respectively, in the two World Wide Technology Raceway events last year, and he swept the Indy Lights doubleheader in 2018 at Portland. Also, he has raced at Long Beach in INDYCAR while Palou has not.

Palou finished 12th and 15th last year at Gateway. He also never has raced in Portland or Laguna Seca, although he has tested at each.

“From now on, we don’t go worse than fifth,” O’Ward said. “We just continue to go better.”

Sato has not had as strong of a season as last year, but World Wide Technology Raceway has been good to him in the past.

In addition to winning the 2019 race, Sato was a factor in both races last year – finishing second in Race 1 by .1404 of a second, and winning the pole and leading a race-high 66 laps in Race 2 before finishing ninth.

If Sato can win one of the season’s final four races, he will become one of only four drivers to have won a race in each of the past five seasons. Dixon, Newgarden and Power already have accomplished that.

Firestone tire allotment: Nine sets for use throughout the weekend

INDYCAR Radio Network broadcasts: Mark Jaynes is the chief announcer alongside analyst Davey Hamilton. Nick Yeoman is the turn announcer. Ryan Myrehn and Jake Query will report from the pits. The Bommarito Automotive Group 500 will air live on network affiliates, Sirius XM 205, indycar.com and the INDYCAR Mobile app powered by NTT DATA. All NTT INDYCAR SERIES practices and qualifying are available on SiriusXM 205, indycar.com and the INDYCAR Mobile app.

Key championship point statistic: Since 2008, the largest deficit overcome by the eventual champion was 59 points by Dario Franchitti in 2010, while Scott Dixon overcame Juan Pablo Montoya’s 54-point lead in 2015. The top five drivers in the 2021 NTT INDYCAR SERIES championship standings are separated by 62 points.

Point differential: The 21 points that separate Alex Palou and Pato O’Ward is the fifth-closest point margin since 2008. Before this season, the average lead with four races to go since 2008 was 38.9 points.

Two rookies – Romain Grosjean and Scott McLaughlin – are expected to compete. Both rookies along with Dalton Kellett will make their first NTT INDYCAR SERIES start at World Wide Technology Raceway. It will be Grosjean’s first race on an oval.