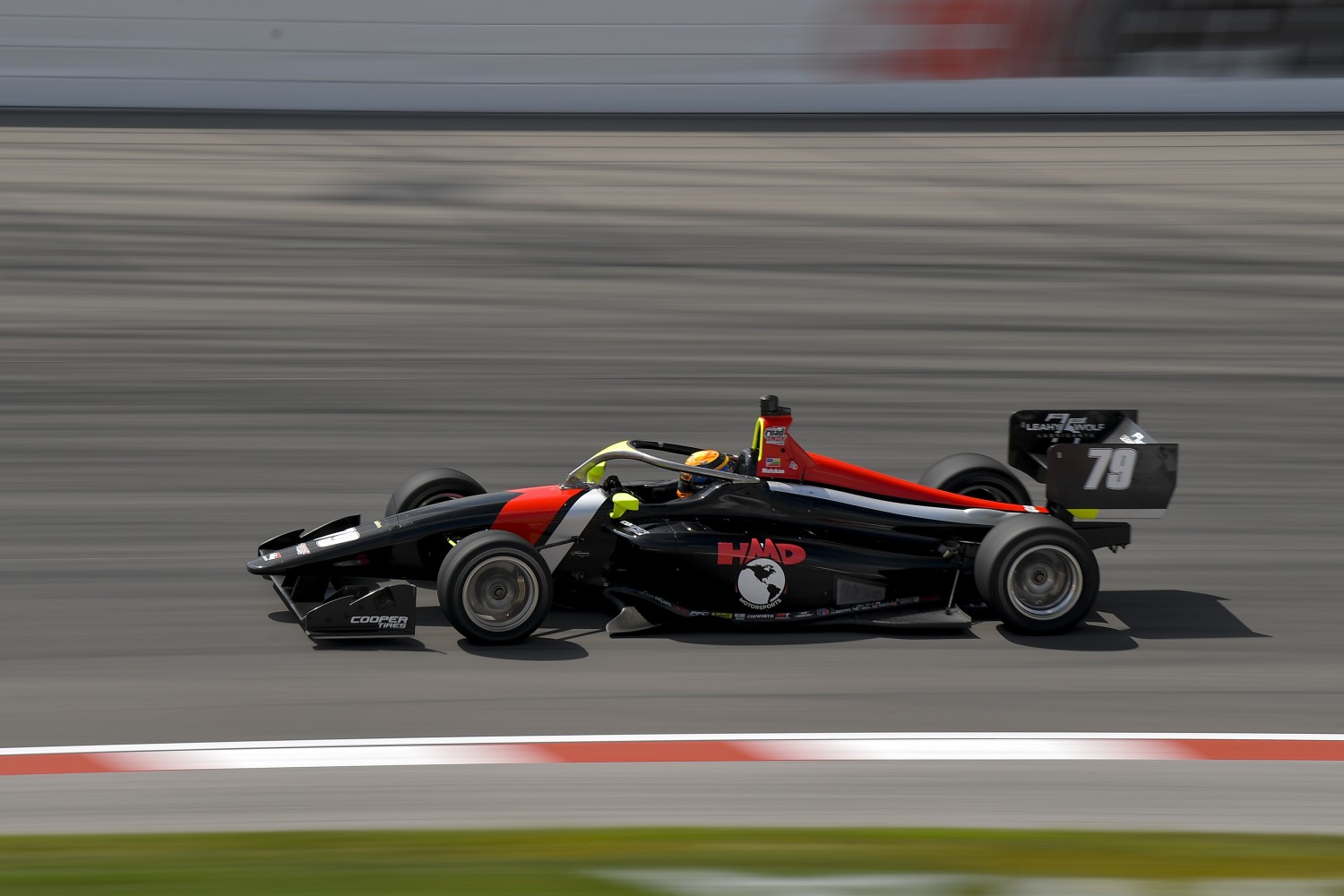 David Malukas of HMD Motorsports led from start to finish in this evening’s opening leg of the double-header Cooper Tires Indy Lights Oval Challenge of St. Louis at World Wide Technology Raceway in Madison, Ill. The Chicago native’s fifth win of the season moved him to within just two points of championship leader Kyle Kirkwood, from Jupiter, Fla., who finished second for Andretti Autosport.

Oval debutant Benjamin Pedersen of Denmark completed the podium for Global Racing Group with HMD Motorsports after teammate Linus Lundqvist, from Stockholm, Sweden, fell victim to an incident in Turn Four while running close behind Malukas in second place.

Earlier in the afternoon Malukas became the first driver this season to claim four Cooper Tires Pole Awards, breaking a tie with Kirkwood, Lundqvist and Danial Frost (Andretti Autosport). Malukas clinched the award – and what could be a crucial additional championship point – following an exciting single-car qualifying session in which the first of each driver’s two laps would determine the starting positions for the first of two races.

Malukas took advantage of his inside front row starting position to hold position at the rolling start, despite the best efforts of Kirkwood who attempted to drive around the outside in Turns One and Two of the unique, 1.25-mile, egg-shaped oval. A sideways slide at the exit of the corner cost Kirkwood valuable momentum, which allowed Lundqvist, up from fourth on the grid, to slip past on the back straightaway.

The race quickly settled into a rhythm with Malukas turning a string of incredibly consistent laps and gradually extending his lead over Lundqvist, who, similarly, seemed to have the measure of Kirkwood in third.

Pedersen settled into fourth ahead of Robert Megennis (Andretti Autosport), from New York, N.Y., and Toby Sowery, who brought out the first caution period when his Juncos Hollinger Racing Dallara suffered a broken front axle. The Englishman did a fine job to bring his stricken car to a halt without incurring additional damage.

The status quo remained at the restart, although once again Kirkwood tried to be aggressive in Turns One and Two which forced Lundqvist into defense mode. A little farther back, Italian-Canadian Devlin DeFrancesco (Andretti Steinbrenner Racing) overtook teammate Megennis for fifth place at Turn Three.

Once again the race quickly settled down, although this time Malukas remained under pressure from Lundqvist…until Lap 59 when he suffered a right-front tire failure in the middle of Turns Three and Four and made heavy contact with the retaining wall. The Swede emerged without personal injury.

Just a couple of laps earlier, Megennis also experienced a similar problem, and with the race once again under caution, Race Director Tony Cotman decided to display the checkered flag nine laps earlier than originally anticipated due to concerns about excessive tire wear.

DeFrancesco crossed the line in fourth ahead of Australian Alex Peroni, who earned his first Tilton Hard Charger Award – in his very first oval race – after starting ninth.

Also today in qualifying for the Indy Pro 2000 Championship Presented by Cooper Tires, Irishman James Roe claimed his first pole position – and the first for Turn 3 Motorsport – for tomorrow’s race which will start at 2:45 p.m.

The green flag for the second and final oval race of the Indy Lights season is scheduled for 5:30 pm CDT tomorrow evening, immediately prior to the Bommarito Automotive Group 500 NTT INDYCAR SERIES headline event. Kyle Kirkwood will start from the pole position, courtesy of being fastest on the second of two qualifying laps earlier this afternoon.

Provisional championship points after 13 of 20 races:

David Malukas (#79 HMD Trucking-HMD Motorsports Dallara-AER IL-15): “What a race! This means the world to me, coming from a crash in Indy two years ago, then to win my third oval race in the series. I’m so happy, that’s the one thing that’s been holding me down and I got it off of me today. I’m sorry that we had to end under yellow but I understand that it was for safety reasons, but I know I deserved this win. This field is so competitive, but it blows my mind, the team I have behind me. Coming into the test here a few weeks ago, I hadn’t been on an oval in two years. We struggled but in the end, we found the car we needed just in time for qualifying.

“But I hope Linus is okay – Turn Four is a fast corner. Our tires looked okay, the team asked me to check during the yellow. We were running up front the whole time, in clean air, so that was a plus and our tires were no problem.”

Kyle Kirkwood (#28 Road to Indy/Cooper Tires/Construction Contractors’ Club-Andretti Autosport Dallara-AER IL-15): “That was a hectic race, I’m glad to finish where we started. Linus and David were just quicker than us. My thought process going into the race was just to commit – to whatever the car had, whatever the track was, I just had to commit if I was going to get into the lead, because it’s so hard to pass once we’re up to speed. I committed on the outside, got back to power and the rear just let go. I thought I had it saved but I didn’t, I let it slide too long. It was pretty under control but I lost too much time.”

Benjamin Pedersen (#24 DirtFish/Bell Helmets/The Heart of Racing/Colibri Capital-Global Racing Group w/HMD Motorsports Dallara-AER IL-15): “I’m so happy to be on the podium after my first ever oval race! I absolutely loved it, I can’t wait to do more. We missed the setup a little bit, which made the first half of the race difficult, but it stabilized from there. The tire wear was a whole new element for me in the race – we’d done a couple of long runs in testing but not in this atmosphere. Lots to learn, like knowing what I want transitioning from qualifying to the race, playing with lines, with roll bars – we’re trying to learn as quickly as possible! We’ll take what we learned from today and hopefully we can get more tomorrow.”