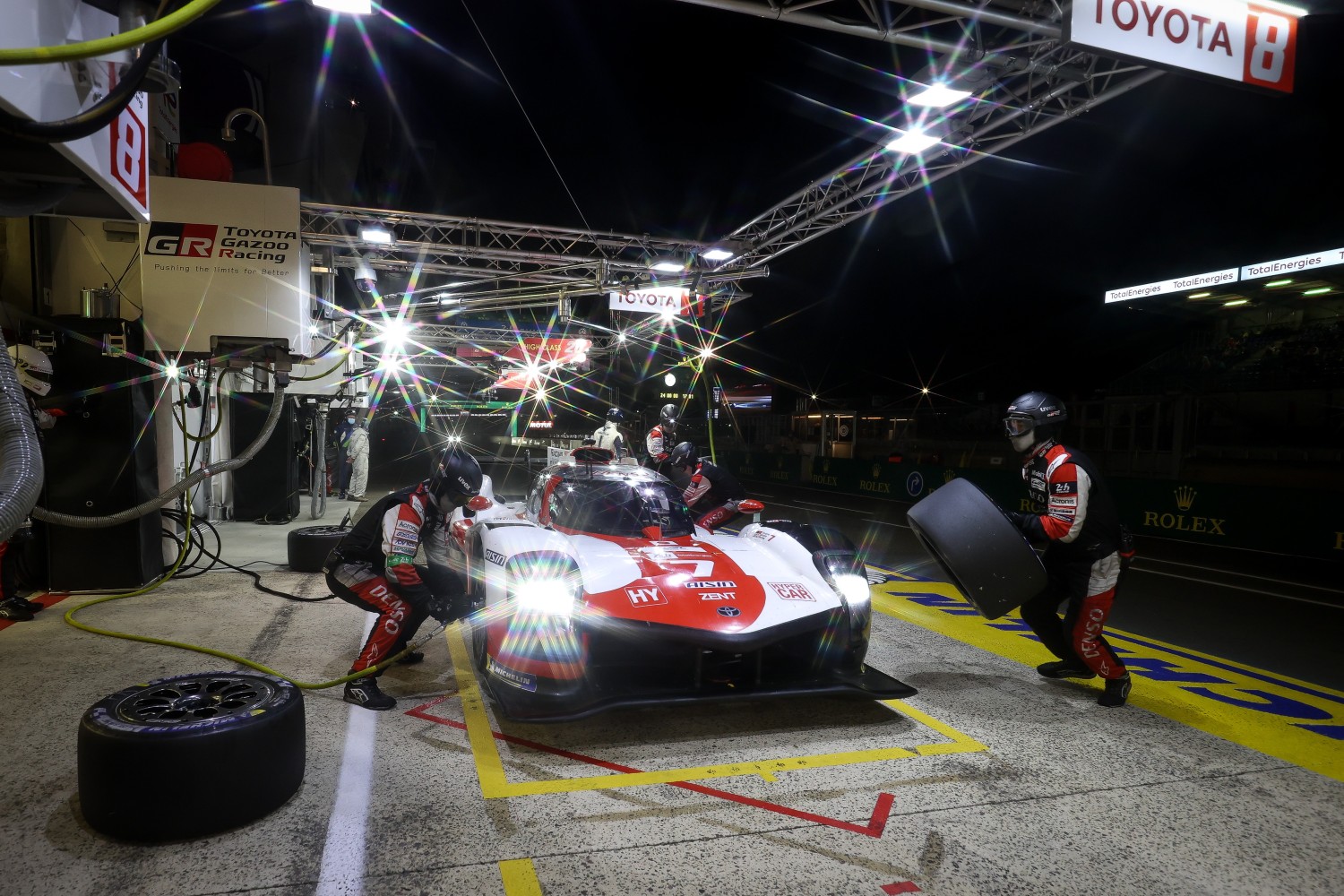 TOYOTA GAZOO Racing held the advantage after the opening six hours of the 89th Le Mans 24 Hours following an incident-packed and rain-affected start at the Circuit de la Sarthe.

Mike Conway, Kamui Kobayashi and José María López in the #7 GR010 HYBRID, which started from pole position, lead after a quarter of the race.

Ferrari maintained 1-2 in LMGTE Pro, but all changed in LMP2 as No.41 Team WRT car took the lead after multiple incidents occur as rain arrives.

No.33 TF Sport to the fore in LMGTE Am category after No. 98 Aston Martin car crashes heavily at start of fourth hour.

Sébastien Buemi, Kazuki Nakajima and Brendon Hartley recovered from the back of the field after being hit by another car on the opening lap. After six hours the #8 GR010 HYBRID was second, 1min 27.148secs off the lead.

Heavy rain in the hour before the 4pm start required two additional formation laps to allow track conditions to improve and contributed to a dramatic opening lap.

Mike led away from pole, but Sébastien was hit from behind by the #708 Glickenhaus going into the first chicane, spinning him round. He dropped to the back of the field moments later when he had to briefly stop at the side as a result of the impact.

That kicked off an impressive fight back from Sébastien, who moved the #8 back into the top 10 on the 10th lap before pitting for slick Michelin tyres. Mike took on slicks a lap later as track conditions, and lap times, improved substantially.

By the time the first pit stop cycle was complete soon after the first hour, Sébastien was up to third, around a minute behind leader Mike. A string of fastest laps helped him overtake the #38 JOTA LMP2 car for second, putting the GR010 HYBRIDs at the front of the field by lap 16.

Mike had held a comfortable lead through the first 90-minutes but the #7 car’s challenge was hampered by two rear punctures in quick succession. Neither cost any significant time, although both stints were therefore shorter than planned.

The #8 car suffered its share of misfortune too. Sébastien suffered a damaged right rear wheel rim in a clash with an LMP2 car while Brendon lost a minute to leader Kamui when held behind a different safety car following a GT accident. Then a right rear puncture forced Brendon to make an early pit stop as the five-hour mark approached and night fell at La Sarthe.

After several light showers, heavier rain struck early in the sixth hour and contributed to two accidents involving LMP2 cars which brought out the safety car again. As the track went green 25 minutes later, Brendon pitted the #8 for hybrid intermediate tyres, with the #7 doing likewise when José took the wheel.

Below are the main headlines following the first six hours.

Hypercar
•    No.7 Toyota Gazoo Racing Hypercar holds 70-second advantage overall and in Hypercar category after six hours racing at Le Mans
•    Brendon Hartley in No.8 Toyota closes gap to No.7 car to 9-seconds in fifth hour
•    But Jose-Maria Lopez, who takes over from Kobayashi extends lead as Toyota splits cars tyre strategy with No.7 on slicks and No.8 on inters in changeable conditions
•    Andre Negrao takes over from Lapierre and drives solid triple stint to keep Alpine ELF Matmut in third but after Mathieu Vaxiviere gets aboard Les Bleues drops to a lap down on Toyota pair in sixth hour
•    Glickenhaus Racing fourth and fifth as No.708 car driven by Franck Mailleux and Pipo Derani take stints at wheel to lead sister car
•    Romain Dumas and Ryan Briscoe complete miles in No.709 Glickenhaus 007LMH as they place fifth

LMGTE Pro
•    Intra Ferrari battle thrills crowds in second and third hours as Daniel Serra in No.52 AF Corse Ferrari and Alessandro PierGuidi in No.51 488 GTE Evo swap places three times on same lap intense battle for lead
•    Serra pulls out advantage to enjoy small gap but safety car in fourth hour diminishes advantage
•    But No.51 pulls gap before second safety car after Serra’s teammate Sam Bird in No.52 car is contacted by No.71 Inception Ferrari driven by Brendon Iribe
•    Come Ledogar takes over and extends lead for No.51 as racing resumes after safety car period
•    No.92 Porsche recovers from first hour incidents and runs third at six-hour mark with Michael Christensen and Neel Jani completing stints
•    Corvette Racing with Jordan Taylor driving in No.63 car takes over at front at start of fifth hour as they capitalise on pitting under slow zone close to pit entrance
•    But car drops to fourth after scheduled pit stops with Nicky Catsburg getting first race laps

LMP2
•    Disaster strikes for No.38 JOTA car as Anthony Davidson spins in gravel just after pit exit and loses full lap and falls to 19th in class at the end of the third hour
•    No.26 G-Drive Racing Aurus of Nyck de Vris, Franco Colapinto and Roman Rusinov takes over in lead with Colapinto holding off Job van Uitert initially
•    But No.28 JOTA car driven by Tom Blomqvist, after being started by Sean Gelael, picks up lead in fifth hour
•    They though suffer two penalties that drop it back down the order, the first for pit entry violation and second for safety car infraction.
•    No.23 United Autosports USA car of Alex Lynn, Paul di Resta and Wayne Boyd briefly lead between pit stops in fifth hour
•    But sixth hour brings high drama as several incidents occur as rain shower arrives
•    Frits van Eerd spins Racing Team Nederland car into gravel handing Pro-Am lead to No.70 Realteam car driven by Norman Nato
•    United Autosports USA then suffer damage to two of its three cars as Manuel Maldonado in No.32 car loses control under braking for Dunlop chicane and spears in to di Resta’s No.23 car
•    Di Resta re-joins after repairs but drops down to 12th in class
•    Shortly after Franco Colopinto collides with Sophia Floersch in Richard Mille car on approach to Porsche Curves.
•    Knock-on incident claims Richard Mille car after it is struck by No.74 Racing Team India Eurasia car driven by Tom Cloet
•    Debris triggers second Safety Car of the race but after six hours Julien Canal in Panis Racing car leads from No.22 United Autosports car with Fabio Scherer in cockpit
•    Panis Racing take over lead but pit just before six-hour mark handing lead to Louis Deletraz in No.41 Team WRT entry
•    No.22 United Autosports maintains second from No.31 Team WRT car in third

LMGTE Am
•    No.33 TF Sport Aston Martin leads LMGTE Am class as Felipe Fraga and then Dylan Pereira takes stints at wheel after Ben Keating completed opening stints
•    No.98 Aston Martin entry driven by Marco Gomes was running second when he crashed heavily at Indianapolis
•    Brazilian treated by medical team at the scene but reported to have escaped injury
•    Cetilar Racing Ferrari 488 GTE Evo runs second for a period as Giorgio Sernagiotto takes over from Antonio Fuoco in car they both share with Roberto Lacorte.
•    Car loses time at pit stop though as it has to make repairs to mirror but chose to replace entire door
•    But in fifth and sixth hours the No.33 TF Sport still leads from No.83 AF Corse which is driven by Alessio Rovera
•    No.57 Kessel Racing Ferrari places third with Mikkel Jensen taking over at the wheel