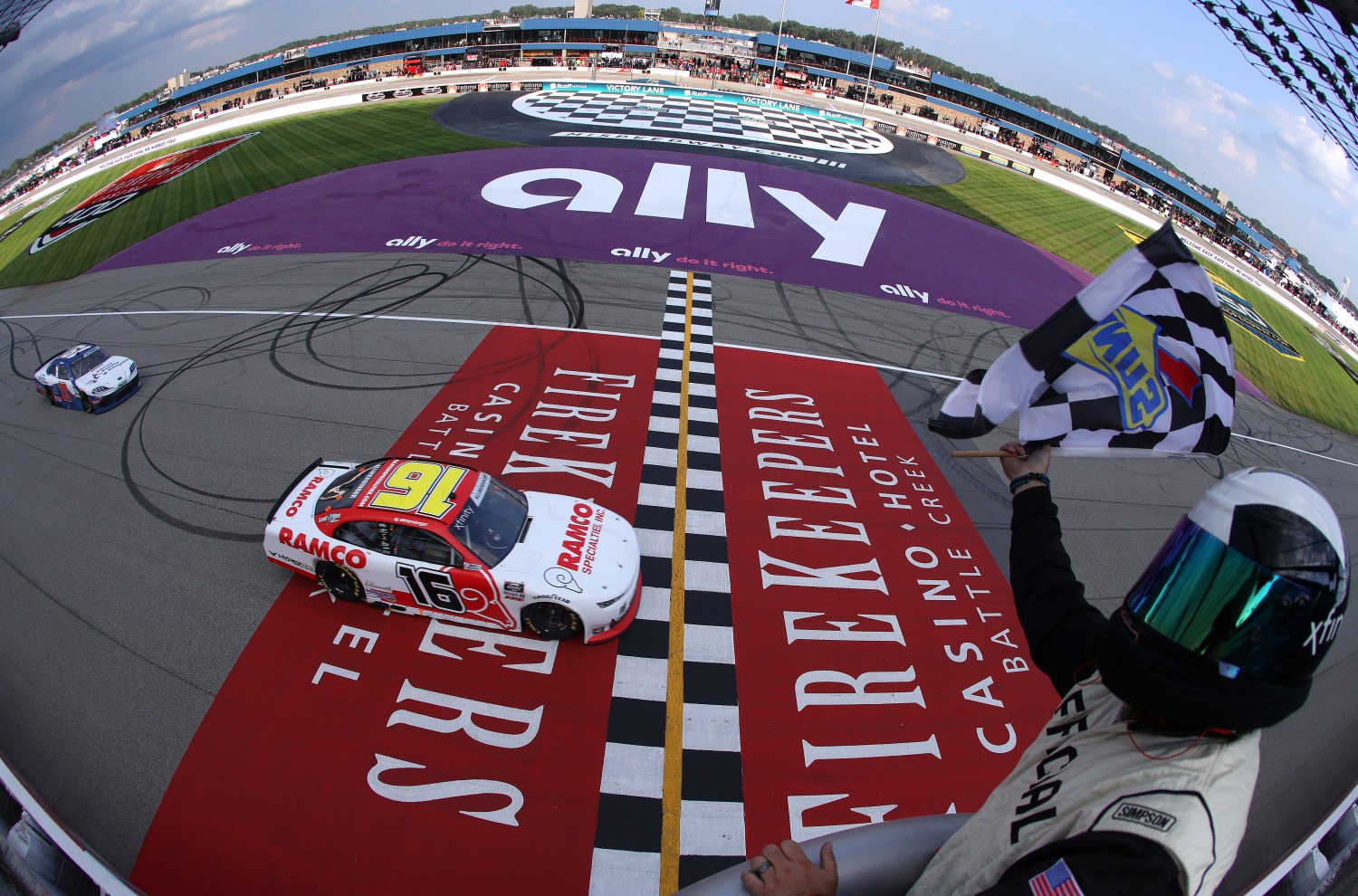 Standing in front of an enthusiastic Michigan International Speedway grandstands after his victory burnout, Kaulig Racing’s A.J. Allmendinger paused and took in  the cheering crowd – on its feet and chanting his name “AJ. AJ. AJ.”

It was the second time in the past week that Allmendinger earned a trip to NASCAR Victory Lane. On Saturday he prevailed in triple overtime to take the New Holland 250 win – the third of the season and the eighth NASCAR Xfinity Series win of his career. He beat Joe Gibbs Racing driver Brandon Jones to the line by a mere .163-seconds and actually thanked Jones for the push on that last restart to let the two decided the trophy between themselves.

It was a high-action day on the Michigan high-banks, with Allmendinger answering his NASCAR Cup Series win at Indianapolis last week by leading a race best 70 of the 139 Xfinity Series laps on Saturday afternoon at Michigan.

“Whoa, I’m more tired from the celebrations than I am the driving,” the 39-year old Allmendinger joked after climbing out of his No. 16 Kaulig Racing Chevrolet and telling the crowd, “Thank you so much, guys.”

“When you restart on the front row, the outside was the place to be. And you also have to just hope you got a push and Brandon Jones, thank you so much. He pushed me every time.

“I don’t want to wake up from this dream,” Allmendinger added.

And while it may have been dream-like for Allmendinger, the outcome was definitely not that for several other of the series’ normal frontrunners.

The bottom of the scoreboard read like the top normally would. Championship points leader and five-race winner Austin Cindric, Daniel Hemric, Justin Haley and Myatt Snider were all involved in a Lap 36 seven-car incident. Brandon Brown, who went into the race ranked 14th, hoping to point his way into the Playoffs during the final four regular season races was also involved.

Cindric, who won the opening 30-lap Stage 1, Hemric, Snider and Brown were unable to finish the race. And Haley, who is Allmendinger’s Kaulig Racing teammate, was able to continue and salvage a 17th-place finish.

“We just got collected in a wreck by the cars that decided to stay out,” Team Penske’s Cindric said. “I thought we had the fastest car out there today. In some ways I feel like that is a bold statement coming from me, but our guys did an amazing job on this Ford Mustang and I wish we could have contended for the rest of the race because I think we would have had a shot.”

Ty Gibbs, a two-race winner even though he is only competing part-time in 2021, made a solid run for another trophy, but spun out while running top 10 in the second overtime. He said on Twitter following the race, “Looks like I ran out a talent.”

JR Motorsports drivers Noah Gragson and Josh Berry (who drove the No. 1 Chevrolet for injured Michael Annett) finished third and fourth with Berry leading an impressive 24 laps and keeping Allmendinger honest in the closing laps. Harrison Burton rounded out the top five.

There are now four races remaining to set the season’s 12-driver Playoff field. The NASCAR Xfinity Series’ next race is the Wawa 250 under the lights at Daytona International Speedway (7:30 p.m. ET on NBCSN, MRN and SiriusXM NASCAR Radio). Holly Cain /NASCAR Wire Service