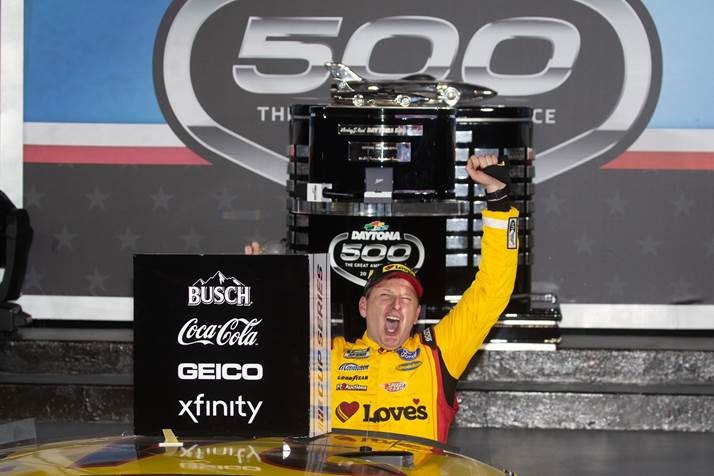 NASCAR drivers Michael McDowell and Austin Cindric have tall tasks in front of them. Even though they were Daytona International Speedway Champions with victories this past February to open their respective seasons, the challenge of sweeping races during the same season at the iconic venue is just as tough as getting that first victory at the World Center of Racing.

When Cindric, winner of the Beef. It’s What’s For Dinner. 300 this past February, takes the green flag in the Wawa 250 Powered by Coca-Cola this Friday, Aug. 27, he will seek to join only Dale Earnhardt, Jr. in 2003 to capture victories in both of Daytona’s NASCAR Xfinity Series races in a year (track has had two Xfinity races each year on the 31-degree tri-oval since 2002).

With a stellar field that includes former Daytona Champions’ Noah Gragson and Justin Haley, and a host of other incredible driving talents, it will be an uphill battle for the 2020 Xfinity Series Champion and five-time 2021 winner Cindric.

The list of names is a “Who’s Who” of NASCAR royalty that includes: Fireball Roberts (1962), Cale Yarborough (1968), LeeRoy Yarbrough (1969), Bobby Allison (1982) and Jimmie Johnson (2013). Roberts, Yarborough and Allison are NASCAR Hall of Famers, and Johnson is a shoo-in once he becomes eligible, while Yarbrough won NASCAR’s Triple Crown in ’69.

After his win in the DAYTONA 500, McDowell said, “Not everybody makes it to Victory Lane, and for 14 years I didn’t. Whether I win this race or not, it is not what defines you…..just to be here now is just so amazing.”

What makes Saturday’s Coke Zero Sugar 400 even more “amazing” is that it will be the final race of the NASCAR Cup Series regular season, the last-chance race for a driver sitting on the outside of the playoffs who will need a victory to make it in the 16-driver championship field. If McDowell can win the Coke Zero Sugar 400 (7:00 p.m. ET start), his career will be defined more clearly as a two-time DAYTONA Champion in the same season.

To find out if McDowell can make history, fans can purchase tickets starting at $49 for adults and $10 for kids 12 and under. Those fans can also purchase access to the UNOH Fanzone for $60. Here, fans can participate in events before the race. This includes, but is not limited to, the return of the traditional Coke Zero Sugar 400 Pre-Race Concert featuring Chris Lane, pre-race ceremonies, driver introductions, access to the large grass ballfield, signing the start/finish line through the middle of the 18-degree, banked trioval. Also scheduled is LIVE entertainment on the main UNOH Fanzone Stage, including Fan Q&A, which includes (scheduled) McDowell, Aric Almirola, Ricky Stenhouse, Jr., Bubba Wallace, Daniel Suarez and two-time DAYTONA winning crew chief Drew Blickensderfer. Fans can also get photos with the winning trophies of the weekend in Ruoff Mortgage Victory Lane.

Tickets to the Xfinity Series Wawa 250 Powered by Coca-Cola, which is set for a 7:30 p.m. ET green flag start, begins at $35 for adults and FREE for kids 12 and under. Access to the UNOH Fanzone will be available before this race as well! A Two-Day Pass is available which includes access to the Coke Zero Sugar 400 on Saturday, and the Wawa 250 on Friday. These passes start at $69 for adults. Fan Q&A is also scheduled for Friday and will include Cindric, Gragson, Haley, AJ Allmendinger and Justin Allgaier.

As part of the “Welcome Back” weekend for fans, the track’s outside Midway (In Front of Sunoco, Toyota, Axalta, Chevrolet and AdventHealth Injectors) and UNOH Fanzone will be the site of a host of exciting interactive activities, featuring eNASCAR Racing, along with other speedway partner exhibits like Pit Boss, Coca-Cola, GEICO, Chevrolet, Toyota, Wawa, Air Force (featuring a fighter jet), Door Dash, Busch Beer, General Tire and a NASCAR Kids Zone.

The first 10,000 fans through the gates on Saturday will receive complimentary Coke Zero Sugar 400 drawstring bags.