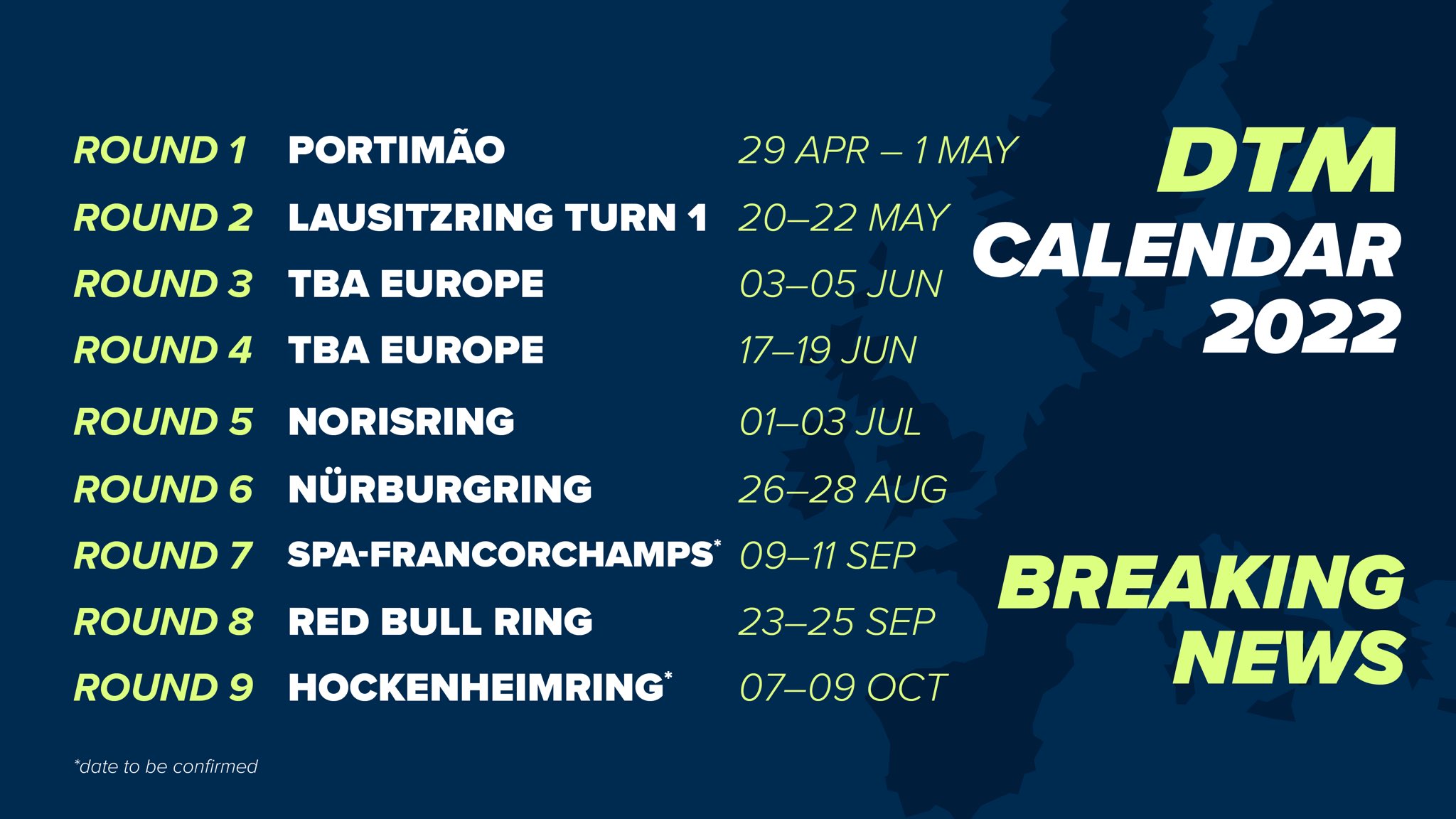 The 2021 DTM is in full swing, more exciting and with more action than ever before. Currently, the race series is at the Red Bull Ring in Spielberg. At the occasion of the race weekend in Austria, the organization ITR is now presenting the provisional race calendar for 2022.

From May until October, a total of nine race weekends in six countries have been scheduled. The Autódromo Internacional do Algarve in Portimão will serve as the venue for the season opener. For DTM, this is a first as it has never staged a race at the track at the Algarve before. The second round at Lausitzring is also a guarantee for mega excitement: here, DTM will be the only series to roar through the spectacular corner Turn 1 where courage is required.

Frederic Elsner, Director Event und Operations: “We are delighted to be presenting the race calendar for 2022 at this early stage already. We have been working on it really hard, because it was extremely important for us to provide planning security and a perspective for the teams and partners that are already involved or are interested. Now, we are looking forward to a good conclusion of the highly exciting current season and then equally spectacular races in 2022. For us, it is great to see how big the interest for the 2022 DTM already is.”

With race weekends in a total of six countries, DTM underlines its status as an internationally operating and popular touring car series. Of course, the traditional circuits in Germany, extremely popular among the fans, have not been left out: the Norisring, hosting the season finale for the first time in 2021, will be serving as the venue for the half-time finale as DTM will be having a summer break of over eight weeks in July and August. The second half of the season gets underway with an event at the Nürburgring while in 2022, the season finale will traditionally be held at Hockenheim. Spielberg will also be featuring again with the beautiful Red Bull Ring. The Ardennes roller-coaster at Spa will be making its comeback after a one-year absence. Moreover, two surprise rounds outside of Germany, to be announced at a later stage, are also awaiting the fans.

“Notwithstanding certain restrictions, 2021 is a very satisfying and successful season. We are looking forward to 2022 and to being able to organize and experience great events again,” says Benedikt Böhme, managing director, ITR. “DTM is a global race series, which is reflected by the new calendar. We are broadcasting live in over 60 countries, so it is even more beautiful that we are able to present a new race track on the calendar with Portimão, excellently fitting to the already proven circuits.”

Tickets for the new season will already be available in the autumn of this year, as Elsner says: “At Spielberg, fans are admitted into the paddock, really close by, for the first time in almost two years. This closeness for the fans has always been characteristic for DTM so therefore, we want to give them the service to be able to plan their race visits for next year at this early stage already.”