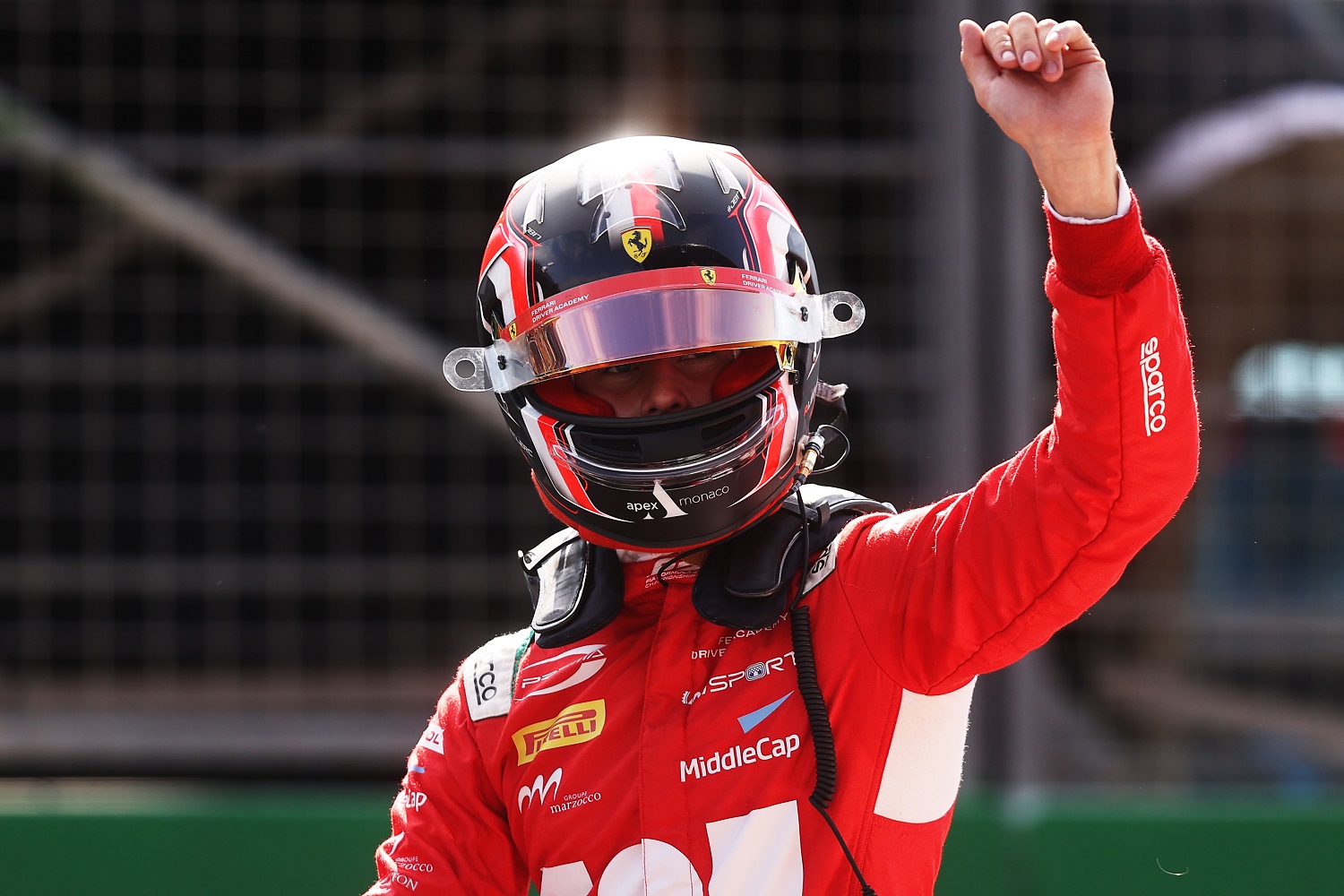 Despite a surging start from second, Sargeant was unable to prevent the Ferrari junior from storming into the lead on the opening lap, as reverse polesitter Amaury Cordeel was taken out of contention by a collision with Alex Smolyar.

Hitech Grand Prix’s Ayumu Iwasa played out a patient race in third, awaiting a mistake from the tussling front two that never arrived, before settling for the final podium spot. Jak Crawford and Caio Collet got stuck into one another in the final lap but retained fourth and fifth at the flag.

Sargeant said in the lead up that he felt he’d not maximized the potential of his Charouz in Qualifying and he went about proving this statement when the lights went out, shooting down the left of reverse polesitter Cordeel and into first place going into Turn 1.

From third, Leclerc had opted for the opposing side and launched his PREMA down the left of the duo, pulling up alongside Sargeant and eventually stealing the lead at the exit of the first corner.

Cordeel was denied a chance to react by a collision with Alex Smolyar, the Campos getting spun around at the opening corner and dumped at the back of the grid. The Russian was later handed and 10s stop-and-go penalty for causing it and ended up behind the Belgian at the back.

Leclerc was clinging onto the lead over Sargeant with all three of Iwasa, Crawford and Collet following as part of a DRS train.

Meanwhile, the Championship leaders had been making moves, with Dennis Hauger into the points from 12th, taking eighth ahead of Frederik Vesti and Clément Novalak while Jack Doohan had clambered up to sixth from P9, ahead of Victor Martins.

Leclerc was handed some respite by the Safety Car after Johnathan Hoggard and Hunter Yeany collected one another Turn 1, the duo getting thrown off course and into Aramco barriers at the first and second corners.

Hauger had lost eighth before the stoppage but refocused when the Safety Car returned to the pits and jumped two places at the restart, beating Novalak and Martins in a brave series of moves.

It had been a troublesome restart for Novalak, who lost further positions to Vesti and Olli Caldwell, falling out of the points to 11th.

Leclerc was able to hang on to first at the checkered flag, the PREMA crossing the line nine-tenths ahead of Sargeant, who told his team on the radio “I gave it everything.”

Iwasa settled for the final podium spot ahead of Crawford, who brushed off a late attempt from Collet to steal fourth. Title rivals Doohan and Hauger finished in sixth and seventh to set up a thrilling battle in Race 2, with Martins, Vesti and Caldwell closing out the top 10.