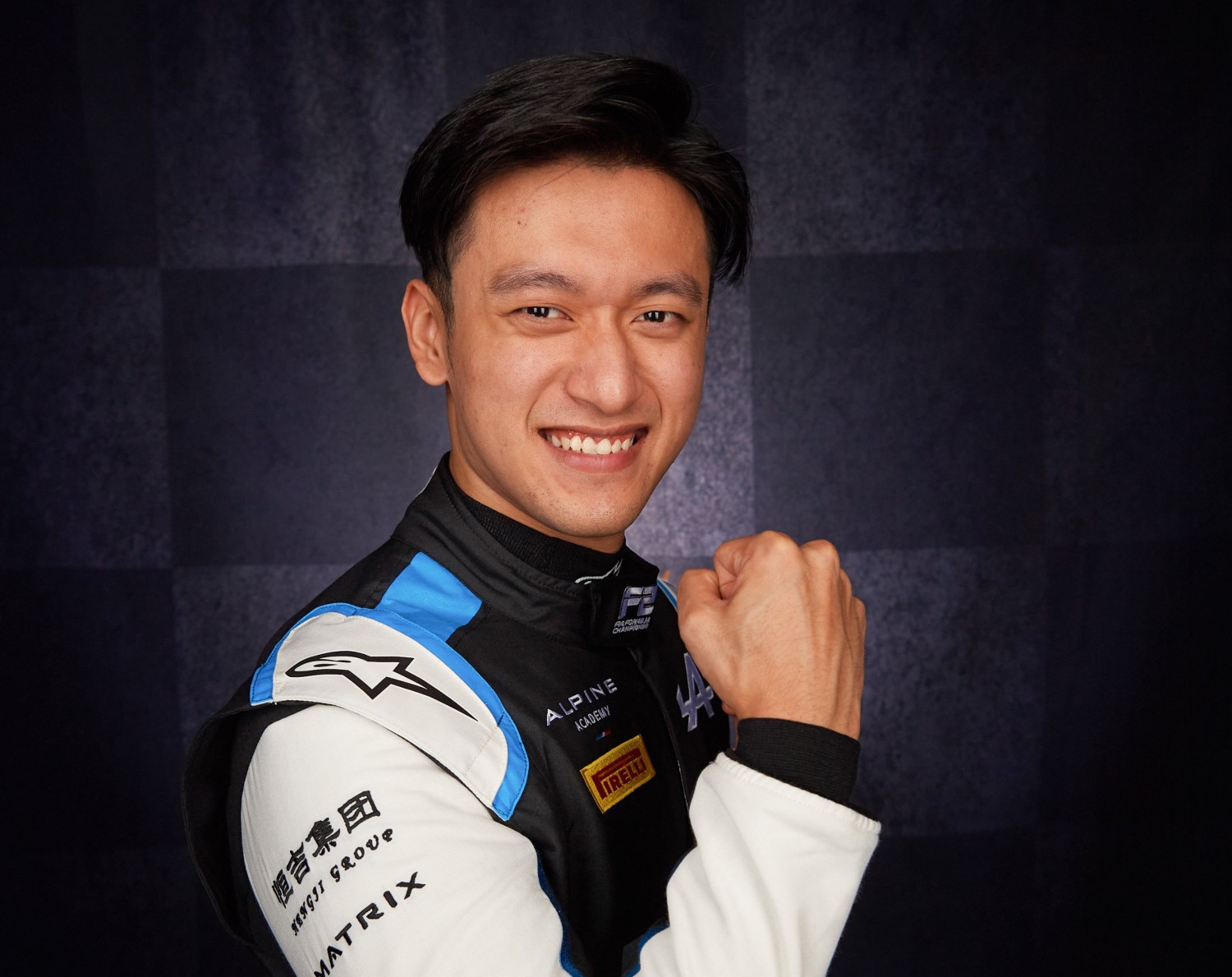 Alfa Romeo Racing ORLEN will have a boost of talent and youthful enthusiasm as Guanyu Zhou joins the team as race driver for the 2022 season. The Chinese youngster, a multiple race winner in the FIA F2 Championship, will make his F1 debut as he lines up on the grid for next season’s opener in Bahrain.

The first ever Formula One race driver from China, Zhou is a trailblazer who will write a pivotal page of his country’s motorsport history. His path to Formula One is one of dedication and commitment, without a direct role model to set the path but with steadfast confidence in his own abilities and the unwavering support of his family.

Having experienced success at all levels of racing in his career, Zhou, 22, has been on the radar of most F1 teams for some time. He finished second in Italian F4 in 2015, before racking up race victories in Euro F3 and F2, Formula One’s feeder series. 2021, in particular, has been a breakthrough year for the driver, who is currently in second place in the standings in F2 and is ready to mount a challenge for the title in the final two events of the season in Saudi Arabia and Abu Dhabi.

Zhou will join a team with heritage and tradition, completing a highly-competitive line-up alongside Valtteri Bottas: this combination of youth and experience will be ready to push Alfa Romeo Racing ORLEN forward at a time in which the sport embraces a completely new set of regulations and all teams start their quest for glory from scratch.

With a complete race driver line-up for 2022, the team is now ready to embark on this new era with confidence. Welcome to Alfa Romeo Racing ORLEN, Zhou!

Frédéric Vasseur, Team Principal Alfa Romeo Racing ORLEN: “It is a pleasure to welcome Guanyu Zhou to Alfa Romeo Racing ORLEN. He is a very talented driver, as his results in F2 have shown, and we are looking forward to helping his talent flourish even more in Formula One. We are proud of our line-up for 2022 and we are confident Zhou will form a very successful partnership with Valtteri. We are also looking forward to welcoming all the new Chinese fans who will join the team: Alfa Romeo Racing ORLEN is a historical brand and one that embodies the spirit of Formula One and we will do our utmost to make the experience of our sport a great one in China.”

Guanyu Zhou, 2022 driver Alfa Romeo Racing ORLEN: “I dreamt from a young age of climbing as high as I can in a sport that I am passionate about and now the dream has come true. It is a privilege for me to start my Formula 1 racing career with an iconic team, a team that has introduced so much young talent into Formula 1 in the past. Now the dream is reality. I feel well prepared for the immense challenge of Formula 1, the pinnacle of my sport, alongside a proven, world-class talent in Valtteri Bottas. I wish to thank the Alfa Romeo Racing ORLEN team for this opportunity. Next year the target will be to learn as much as possible and as quickly as possible. To be the first ever Chinese driver in Formula 1 is a breakthrough for Chinese motorsport history. I know a lot of hopes will be resting on me and, as ever, I will take this as motivation to become better and achieve more.”

Reportedly with $30 million in Chinese backing, the 22-year-old Alpine junior is strongly linked with Antonio Giovinazzi’s seat at Alfa Romeo for 2022.

Team boss Frederic Vasseur says the arrival of Mercedes’ Valtteri Bottas next year gives him extra freedom to make a creative choice for the Finn’s teammate.

“I think the fact that we have been able to recruit and welcome Valtteri is a huge opportunity for us,” he said.

“Then it doesn’t matter so much whether his teammate is a rookie or an experienced driver, as we will benefit from Valtteri’s experience and speed.”

Vasseur, however, says he is undecided about keeping or ousting the Ferrari-backed Giovinazzi, insisting the Italian is “doing a good job”.

But when asked about Shanghai-born Zhou, the Frenchman added: “Zhou is doing a good job in Formula 2. Of course he is on the list.”

It is believed Zhou will soon appear in an Alpine for a Friday practice session for the second time this season.

However, Alpine’s Marcin Budkowski refused to comment on “rumours flying around” about Zhou making the big step up to Formula 1 with Alfa Romeo next year.

“I am not going to comment on rumours or on driver contracts other than to say that we are evaluating options for our academy drivers,” he said.

Zhou himself, though, appears poised to make the big move to Formula 1.

“If I win the (F2) championship or finish in the top three, then the opportunity will come,” he said.

“This year will be my last in Formula 2, I’m pretty sure of that. I think three years is enough to prove myself.”

Sources say Zhou will replace Giovinazzi who has raced for the Alfa Romeo team since 2019, with a best result of fifth at the 2019 Brazilian Grand Prix. His results since have been solid but nothing special, having failed to beat Raikkonen in any of the three seasons as team-mates.

22-year-old Zhou, who was also chasing the second seat at Williams that went to Alex Albon, comes with sponsorship of around $30 million from his Chinese backers.

(GMM) A Chinese driver has raced into pole position to be Valtteri Bottas’ teammate at Alfa Romeo next year.

On Monday, the lid was finally lifted on Mercedes’ plans for next year, with Finn Bottas departing – and the door now firmly open for George Russell.

“This hasn’t been an easy process or a straightforward decision for us,” said team boss Toto Wolff.

“He would absolutely have deserved to stay with the team, and I am pleased that he has been able to choose an exciting challenge with Alfa next year to continue his career at the top level of the sport.”

The news puts into context Bottas’ controversial decision to set the fastest lap towards the end of Sunday’s Dutch GP – requiring Lewis Hamilton to better it in order to secure the vital extra point.

“It was a bit cheeky, but understandable,” said Wolff when asked about Bottas’ reaction to the team order.

“We are going to talk about it but in a most amicable and professional way. But I can certainly relate to the situation.”

Bottas justified the move by insisting he was “just playing around”, but it calls into doubt his commitment to helping Hamilton and Mercedes to win the 2021 titles before his departure.

He admits: “Lewis needed that one extra point more than me.

“He is fighting for the world championship and as a team we’re trying to get the maximum points so that’s how it is.”

“At one point, Bottas made a mistake when Max was behind him,” he told Ziggo Sport. “Then Max struck right away.

“This is why Bottas is not worthy of a Mercedes seat. He made it way too easy for Max.”

One pertinent question now is who Bottas will be paired with at Alfa Romeo next year.

According to RMC Motori correspondent Paolo Ciccarone, the favorite is a front-running Formula 2 driver from China, Guanyu Zhou – although other media reports suggest there are four other candidates.

The publication said Zhou is poised to replace Antonio Giovinazzi thanks to EUR 30 million promised to the Swiss-based team by his sponsor.