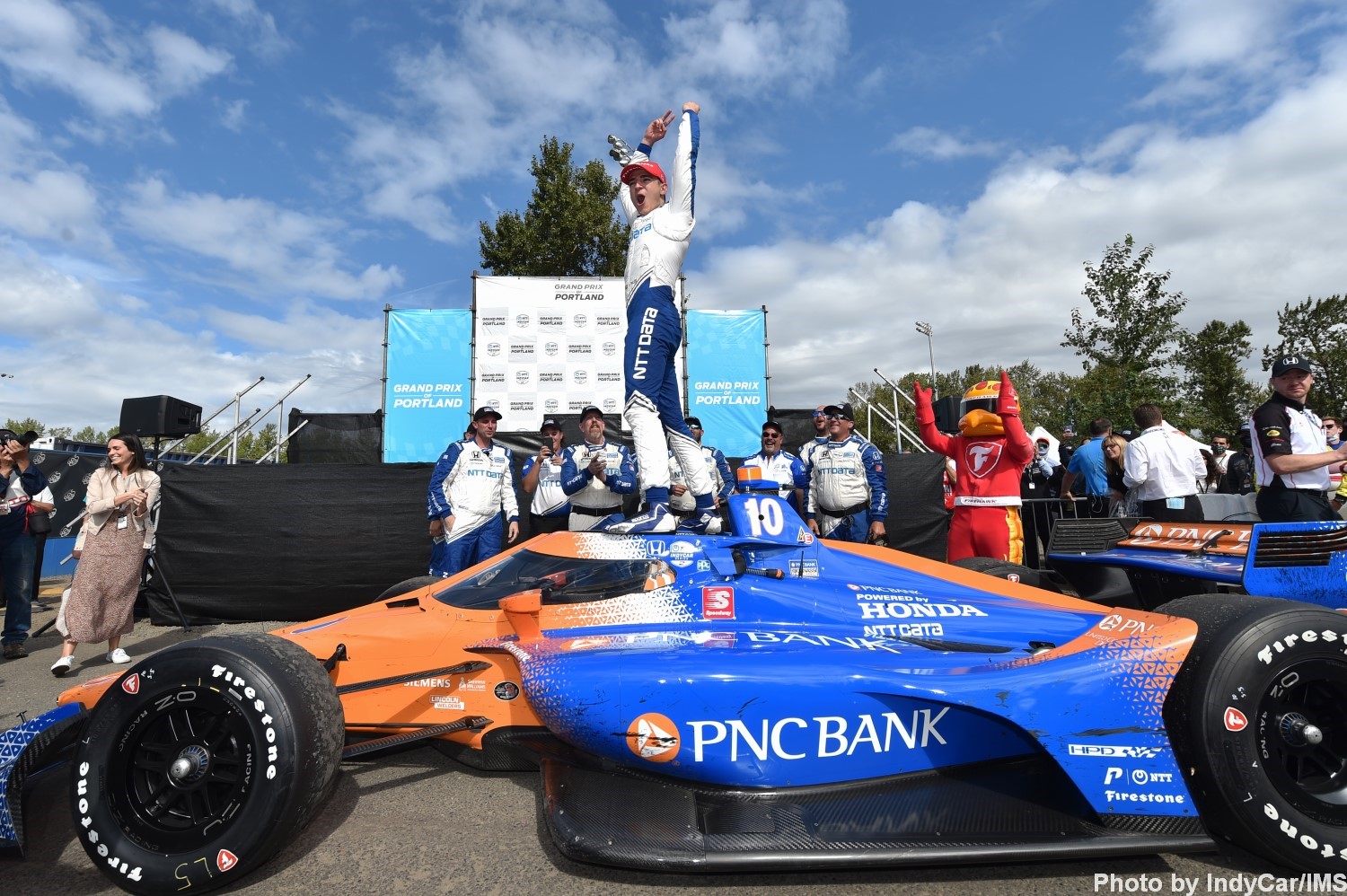 Alex Palou never raced at Portland International Raceway before Sunday, but that did not stop him from winning pole and then schooling Alexander Rossi to win the GP of Portland IndyCar race in the #10 PNC Ganassi Honda by 1.2895s.

Within 1/2-sec of the leader, Rossi appeared to have the pace to make a pass on Palou, but Rossi choked like he usually does, put his #27 Napa Andretti Honda right side wheels off in the dirt with 10 laps to go and fell back to almost 1.5s behind Palou, and he was never able to make up the deficit.

“We kept our heads down, and we knew the race was really long,” Palou said. “I cannot believe it. We made it (on fuel). The guys made it. They just gave me the numbers, and we just follow it. The strategy was amazing.”

The race started off with the usual crash in Turn 1 as the IndyCar drivers do not appear skilled enough to get through Turn 1 without crashing, which they do every year. The only year they did not look like a bunch of wankers was in 2007 when the Champ Car race was started from a standing start.

That kerfuffle mixed up the field, put the original leaders toward the back of the field, and opened up the race to various race strategies.  All the top finishers in the race made an early pitstop under that long caution and that proved to be the winning strategy.

O’Ward led 28 laps early in the race but faded in the second half in the No. 5 Arrow McLaren SP Chevrolet, finishing 14th.

Two-time series champion Newgarden is third in the standings, 34 points behind Palou. Dixon is fourth, 49 points behind the leader, and Marcus Ericsson is fifth, 75 points back. Ericsson finished seventh in the No. 8 Huski Chocolate Chip Ganassi Racing Honda.

“I don’t care that much about the points at this moment,” Palou said. “I think the race we did today, it’s just amazing. Not me, but the guys, with the strategy, with the pit stops, with everything. With all the bad luck we had, we still won. I’m proud about that. Fried chicken tonight!”

Palou and Dixon both overshot Turns 1 and 2 of the three-turn chicane at the end of the front straight after Dixon’s car was nudged from behind by the No. 7 Arrow McLaren SP Chevrolet of Felix Rosenqvist, who also went wide in Turn 1 along with Colton Herta’s No. 26 Gainbridge Honda and others.

Neither Palou nor Dixon suffered damage in the melee that triggered the first of four caution periods in the race. But five drivers in the mid-pack and rear of the field – Will Power, Romain Grosjean, Oliver Askew, James Hinchcliffe and Helio Castroneves – all were forced to the pits or paddock for repairs after contact in the fracas. Hinchcliffe was unable to continue.

That caused a massive reshuffle of the order, as O’Ward and Rahal claimed first and second on the restart on Lap 11 because they stayed on track and clean in the first-lap incident. Meanwhile, Palou was moved to 16th, Dixon 17th, Rosenqvist 18th, Rossi 19th, Newgarden 21st and Herta 22nd for the restart after INDYCAR officials reviewed timing loop data, and those drivers’ long road back toward the front began.

Palou, Dixon, Herta and Rossi were among the drivers who pitted under yellow on Lap 9. Those stops triggered a tactical battle of varying fuel and pit strategies for the rest of the race, as teams and drivers decided whether to overcut or undercut rivals with fast pit-in and pit-out laps and perfectly executed stops.

O’Ward stayed out front until he made his first pit stop on Lap 29, handing the lead to Graham Rahal in the No. 15 Total Quartz Honda. Various pit cycles thrust Ed Jones, Harvey, Dixon and Palou into short stints out front before Rahal took control of the race on Lap 44.

Rahal maintained a lead of around 2.5 seconds over O’Ward until rookie Callum Ilott and Dalton Kellett both slowed on track in separate spots on Lap 51, triggering the second caution period of the race on Lap 52.

While a handful of drivers pitted, Rahal elected to stay out and led until Lap 74, when he and second-place Jones pitted to hand the lead to Harvey.

Pit cycles then unfolded over the next 12 laps before Palou, who made his final stop on Lap 79, one lap before teammate Dixon, took the lead for good on Lap 86.

Palou pulled away from Rossi on restarts on Lap 89 and Lap 92 after brief caution periods and reached the checkered flag leading 29 laps for the race. Rahal led a race-high 36 laps before finishing 10th.

Alex Palou (Chip Ganassi Racing Honda) Race winner, his third career INDYCAR win and third win of 2021, regains Drivers’ Championship points lead with two races remaining: “I need to see a replay [of the multi-car accident just after the race start], but we kept our head down.  We knew the race was really long, and our strategy was amazing.  HPD gave us the power we needed, and I’m super proud of our partners, and our team.  The whole team was amazing today:  the strategy, the pit stops, everything.  With all the bad luck we had [at the start], we still won. I’m proud about that.”

Alexander Rossi (Andretti Autosport Honda) Started second, finished second: “It wasn’t a win, which is always the goal, but a podium is still a good reward for the team.  It’s been a frustrating year.  Speed has never been the issue, but we haven’t been getting the results and getting it done.  But I think we definitely have had the performance coming back from our summer [three-week] break.  Today was a good boost, and we still have two more to go.”