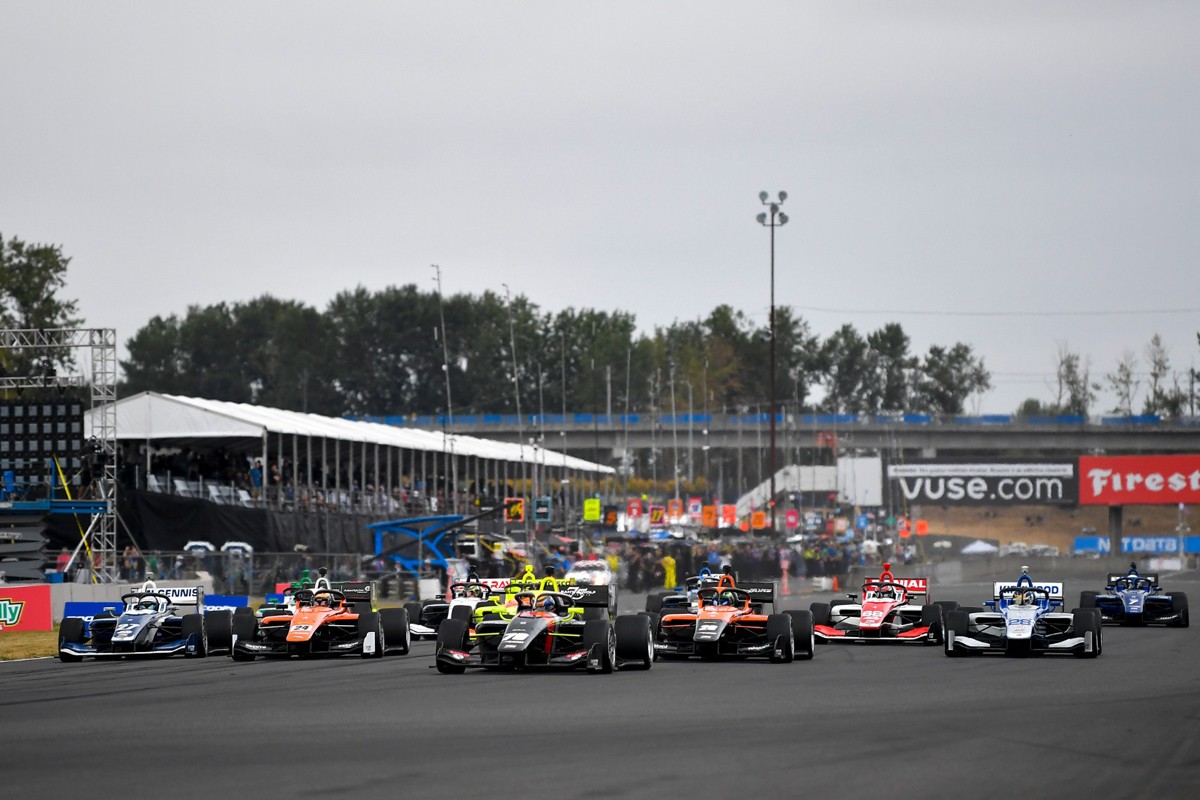 The sizzling fight between championship contenders David Malukas of HMD Motorsports and Kyle Kirkwood of Andretti Autosport continued in spectacular style today with Kirkwood claiming his seventh win of the season in the Cooper Tires Indy Lights Grand Prix of Portland. Kirkwood, who started fourth, finished just over 2.5 seconds clear to whittle his points deficit to just five in arrears with four rounds remaining on the 2021 calendar.

Malukas, who claimed back-to-back Cooper Tires Pole Awards at Portland International Raceway and a series leading six in total, was out of push-to-pass range for the majority of the race, settling for second and his 13th podium of the season.

The race began under cloudy skies with temperatures in the mid-60s. Malukas made a great start to initially take charge of the 30-lap feature followed by Lundqvist and Kirkwood, who found his way around third-place qualifier Benjamin Pedersen (Global Racing Group w/ HMD Motorsports) at the start. But Malukas’ battle with Lundqvist heading into Turns One and Two the following lap allowed Kirkwood to capitalize with a magnificent outside pass to slot into the lead where he was never seriously challenged.

Pedersen continued his fine form with another fourth-place finish and fastest lap of the race with Robert Megennis (Andretti Autosport) again rounding out the top five.

The most entertaining battle on the track in the later stages was for sixth place between stablemates Devlin DeFrancesco (Andretti Steinbrenner Racing) and Danial Frost (Andretti Autosport), which began in earnest on Lap 11 and continued until Lap 22 when Frost finally charged his way through.

Christian Bogle of Carlin, who finished eighth, took home the Tilton Hard Charger Award with a gain of three positions.

The race was caution-free despite opening lap contact between Manuel Sulaiman (HMD Motorsports) and Sting Ray Robb (Juncos Hollinger Racing) which resulted in a penalty to Sulaiman for avoidable contact and major repairs for Robb, who finished 11 laps down.

Provisional championship points after 16 of 20 races:

Kyle Kirkwood (#28 Road to Indy/Cooper Tires/Construction Contractors’ Club-Andretti Autosport Dallara-AER IL-15): “I am just ecstatic right now. This might be my favorite win of the season so far. We haven’t had it the entire weekend but we kept chipping away at it and the car was the best it’s been all weekend. It was just on rails, even on old tires. This is super important since they had three wins in a row. That one was a little bit gifted, because they went down the inside and I was able to cross them up and go around the outside with so much more momentum than they had. I only had one shot at it, but it was a matter of right place, right time. Once I was out front, it was just about getting out of push-to-pass range and once we did that, we were in a comfortable position. But this win is crucial for the championship and it’s super important especially on a weekend like this where they were so dominant.”

David Malukas (#79 HMD Trucking-HMD Motorsports Dallara-AER IL-15): “The first lap was great! We couldn’t get away as much as we would have liked, especially since Linus was on new tires. Once he got into push-to-pass range going into Turn One, I knew it would be intense. I had to protect the inside and I didn’t know Kyle was on the outside. We were quick out front but once we were behind Kyle, in the aerowash, I was just scrubbing the tires trying to stay with him. I had to back off because I knew Linus, on the new tires, would be coming. But it’s a win at any rate as we know it’s going to be tight through Mid-Ohio. It’s great for the fans and I’m loving it either way, as long as we keep showing our performance for next year.”

Linus Lundqvist (#26 HPD/Global Racing Group/FX Airguns/Paytrim/JULA-Global Racing Group w/HMD Motorsports Dallara-AER IL-15): “I had to go for it. I was on push-to-pass and I had a good run. There was a gap – a small gap, but still a gap – and I went for it. The two of us ran a bit deep and credit to Kyle, he was patient, made a smart move and got around both of us. It was unfortunate. We would have liked to keep Kyle behind both of us. We had the pace this weekend so it’s disappointing to let this one go. We’re here to win races, but it’s good to have two races back on the podium after a difficult stretch over the past two months. Hopefully we can build on this as we head toward the end of the season.”