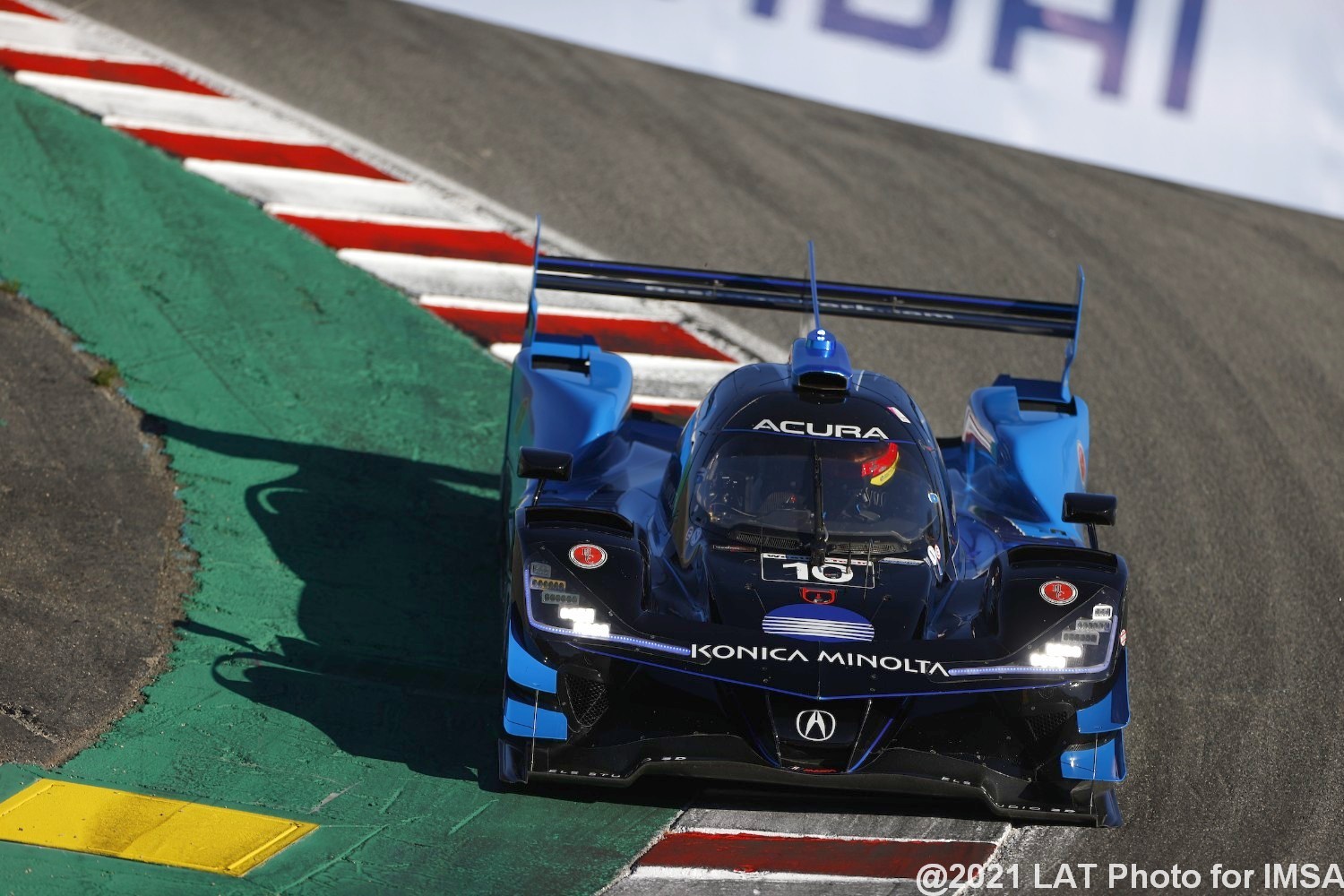 Ricky Taylor finished it, but Filipe Albuquerque’s earlier effort may have won the race.

Albuquerque fought issues related to a blocked brake air duct, then handed the No. 10 Konica Minolta Acura ARX-05 to Taylor, who regained control of the lead with 25 minutes remaining to lead the duo to victory Sunday in the Hyundai Monterey Sports Car Championship at WeatherTech Raceway Laguna Seca.

The victory padded the pair’s lead in the driver standings for the Daytona Prototype international (DPi) class in the IMSA WeatherTech SportsCar Championship. They now lead Pipo Derani and Felipe Nasr, who finished third Sunday in the No. 31 Whelen Engineering Racing Cadillac DPi-V.R, by 100 points with just two races remaining in the 2021 season.

As Albuquerque led the field during his second stint, sensors indicated elevated temperatures in the car’s right rear tire. Wayne Taylor Racing engineers atop the pit stand suspected the air duct leading to the brake was blocked by debris, but Albuquerque needed to stay on track until the next scheduled pit stop.

“I started to lose it, and it was like, ‘OK, boys, how many laps to go (before the next stop)?’” Albuquerque said. “I was sliding all over, braking was really hard, and it was 14 laps to go? And that’s why they hire us, to do the job whatever the condition is.”

After the driver change, Taylor fell behind Olivier Pla, whose Meyer Shank Racing with Curb-Agajanian team used a strategy move to get Pla’s No. 60 Acura ARX-05 into the lead. However, Pla had to slow dramatically to save fuel to reach the finish of the two-hour 40-minute race, and Taylor passed him easily with 25 minutes left.

Taylor praised Albuquerque and the team for their ability to deal with the unexpected duct issue, running Acura’s win streak at WeatherTech Raceway to three straight years.

“These things happen,” Taylor said. “Everybody is going to have bad luck throughout the year, but it came at a point in the year when we had that kind of downward momentum. And it was the time of year where the (No.) 31 is coming.

“Everybody said before the weekend the ‘Jaws’ music was playing, so I think the team responded really well to the ‘Jaws’ music. They didn’t really let it get to us. The team did their job.”

Renger van der Zande passed Nasr with two minutes left to secure second place for himself and co-driver Kevin Magnussen in the No. 01 V-Performance Academy/Chip Ganassi Racing Cadillac. Pla finished fourth in the No. 60 with co-driver Dane Cameron.

The moral of Sunday’s story? When adversity arrives, keep moving forward. You might just outrun it.

“There is always adversity throughout the race,” Taylor said. “It’s how you deal with it in sports car racing that makes the difference.”

Tandy, Milner Get Day in the Sun with Breakthrough GTLM Win in No. 4 Corvette

After running in the shadow of its sister car most of the year, the No. 4 Corvette finally emerged Sunday under the bright California sky.

Milner and Tandy have won twice before this season, but those triumphs came in the Motul Pole Award 100 qualifying race for the Rolex 24 At Daytona in January and the non-points Chevrolet Sports Car Classic at Detroit in June. They had finished second to Garcia and Taylor on three occasions in 2021 before turning the tables on Sunday.

“It feels like we have a monkey off our back a little bit with getting a full race win,” Milner said following his third WeatherTech Raceway victory. “We’ve had really fast Corvettes all year long, even last year with Olly (Gavin). For one reason or another, we couldn’t put it together. … It feels great today to get that win.”

The No. 4 shadowed the No. 3 most of the race, with Taylor and Garcia leading 68 of the first 74 laps. The decisive moment came in the final round of pit stops. Tandy stopped two laps later than Garcia but nearly cost himself the win with a hasty departure along the tight pit exit lane. Tandy locked his brakes entering the hairpin exit, slid into the dirt and briefly onto the track before veering back onto the pit exit lane to complete a legal return to the track just in front of Garcia.

From there, Tandy steadily edged away for the win. The No. 79 WeatherTech Racing Porsche 911 RSR-19 shared by Cooper MacNeil and Matt Campbell finished third.

“The previous stop, I exited the pit and braked way too early (in the pit exit lane) and thought I’d given up too much time,” explained Tandy, who won at WeatherTech Raceway for the second time. “Knowing it was going to be close on where we were going to come out on the last stop, I braked a little later – not by much – but she didn’t want to stop. The front wheel locked and took a little trip across the gravel. I managed to get back into the pit exit before blending on the track. There was no real harm done.”

Garcia and Taylor still maintain a comfortable 187-point lead in the GTLM standings over Milner and Tandy with three races remaining.

While Taylor and Albuquerque celebrated the victory and increased points lead in DPi, Ben Keating and Mikkel Jensen did the same in the Le Mans Prototype 2 (LMP2) class

Keating started first in class but dropped behind at the start. He recovered, then Jensen brought the No. 52 PR1 Mathiasen Motorsports ORECA LMP2 07 home a lap ahead of runner-up Gabriel Aubry in the No. 8 Tower Motorsport ORECA he co-drove with John Farano. It gave PR1 Mathiasen five wins at the 2.238-mile road course and 25 in top-level IMSA competition.

The start wasn’t much to see, Keating said, but the finish was.

“I had a miserable start,” Keating said. “I think I went into Turn 2 in third place. I knew we had a setup on our car that was really aimed towards the end of the stint. It was going to be a bit difficult to drive the first few laps, so I didn’t have anything for those guys.”

A caution period gave Keating the opportunity to regain the lead, and Jensen finished the victory to increase their lead in the LMP2 standings over Tristan Nunez and Steven Thomas, who combined to finish third in class Sunday in the No. 11 WIN Autosport ORECA.

“It’s important to win and extend the lead, and it’s important that our best competitors finished third,” Jensen said of the points margin, now 113 with just the Motul Petit Le Mans at Michelin Raceway Road Atlanta in November remaining for the LMP2 class. “We go into the last round in a good position. I’m not really into the points and where we have to finish, but I am sure we are standing pretty good.”

Pfaff Motorsports is getting hot at the right time, putting drivers Zacharie Robichon and Laurens Vanthoor squarely in the GT Daytona (GTD) championship conversation. Robichon and Vanthoor won for the second straight race on Sunday, taking the No. 9 Plaid Porsche 911 GT3R to victory lane at WeatherTech Raceway Laguna Seca. On the heels of a win last month at Road America, Robichon, Vanthoor and the No. 9 moved into second in the GTD season standings and closed within 27 points of the lead.

“The target was clear from Day 1 that we wanted to try to win the championship because we are a new team together,” said Vanthoor, who joined Pfaff this season after driving the previous four years for the Porsche GT Team in GTLM, winning the 2019 championship. “For me also, it was a bit of an adaptation coming from GTLM to GTD; it is a little bit different.

“I think that we are now in a good position but there are still three races to go and a lot that can happen. But for me, I always set myself personally a goal. And this year it’s really been to win the championship, so I hope we can fulfill that.”

Robichon started in the No. 9. Vanthoor, the GTLM winner last year at WeatherTech Raceway, slid into the cockpit an hour into the race during the first pit stop. He soon passed Patrick Long in the pole-sitting No. 16 Wright Motorsports Porsche for second place. Following a lightning-quick final stop from the Pfaff crew, Vanthoor took the lead and held it for the final hour.

Vanthoor finished 5.512 seconds ahead of Bryan Sellers in the No. 1 Paul Miller Racing Lamborghini Huracán GT3 – the fifth podium finish this year for Sellers and co-driver Madison Snow who are without a win. Long and co-driver Trent Hindman finished third in the No. 16 Porsche.

“I think a huge shout-out has to go to the team,” Robichon said, “because in my first stint there were a couple issues that I immediately pointed out to them and they rectified it to give the absolute best possible car to Larry. I think we all saw what he did.”

Robby Foley and Bill Auberlen, who led almost half the race in the No. 96 Turner Motorsport BMW M6 GT3, finished fourth to retain the GTD championship lead by 27 points over Robichon and Vanthoor. No. 23 Heart of Racing Team Aston Martin Vantage GT3 pilots Roman De Angelis and Ross Gunn fell to third in the season points chase but still lead the IMSA WeatherTech Sprint Cup standings by 168 points over Auberlen and Foley.