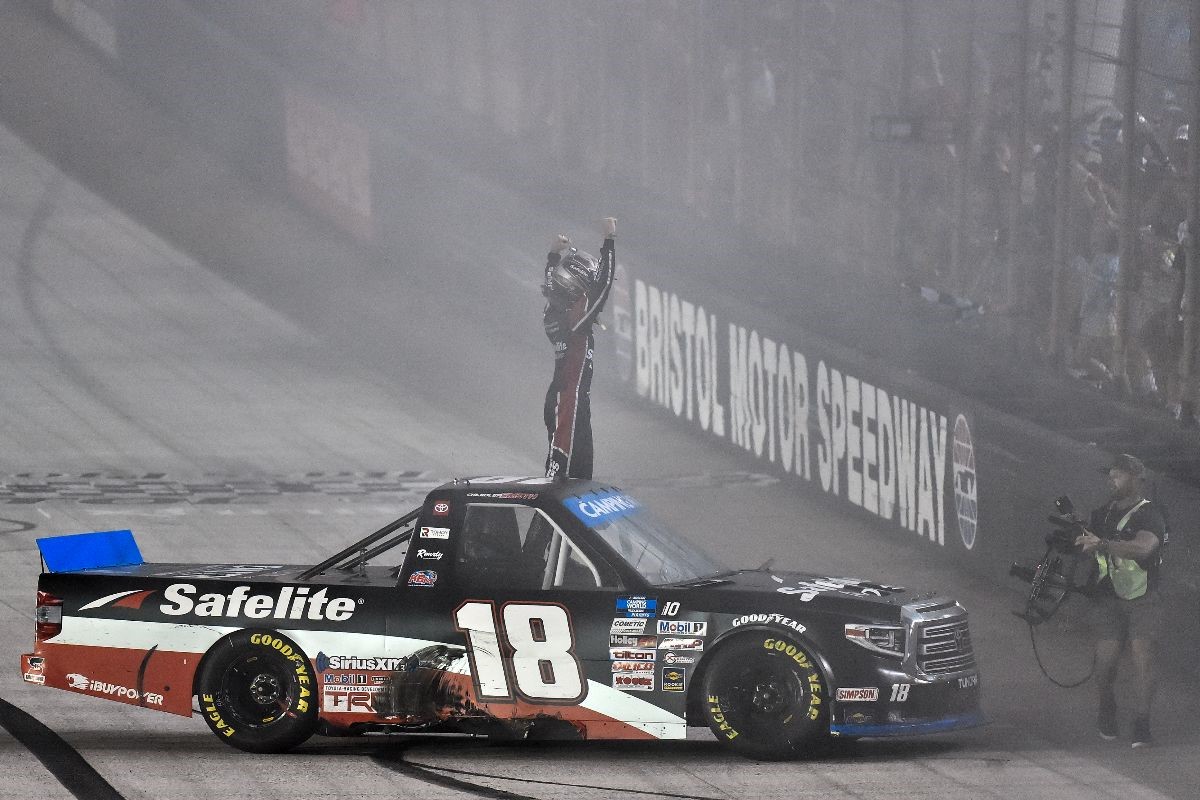 BRISTOL, Tenn. — In a stunning upset on Thursday night at Bristol Motor Speedway, rookie Chandler Smith stole a victory from reigning NASCAR Camping World Truck Series champion Sheldon Creed, clinched a spot in the Round of 8 of the Playoffs and eliminated Todd Gilliland from the postseason.

It was a Toyota Truck sweep of the top-5.

The entire tenor of the UNOH 200 presented by Ohio Logistics changed in the final five laps. On a restart on Lap 196 of 200, Smith powered his No. 18 Joe Gibbs Racing Toyota to the inside of Creed’s No. 2 GMS Racing Chevrolet and refused to cede the top spot.

The victory was Smith’s first in the series, and it came at the most opportune time. As he approached the final restart, the 19-year-old driver knew his only remaining path to the Round of 8 was a victory.

“I’m speechless right now,” Smith said after climbing from his truck. “I’ve really been tested this last year or two and tested my faith. I have to thank everyone behind me… This is just incredible. It finally paid off. I’m just so happy right now.”

Creed led 189 laps and appeared headed for a sweep of all three races in the Round of 10, until he and Smith made side-to-side contact after the final restart.

“I was kind of at their mercy,” said Creed, who already had clinched a spot in the Round of 8 with wins at World Wide Technology Raceway and at Darlington. “I knew I was going to get hit—I just didn’t know where.

“They did what they had to do to win… I don’t know if they’re going to get away with that in the next round.”

Smith was not apologetic for the way he raced Creed after the final restart.

“I think any other driver that was in my situation would have done the exact same thing,” he asserted. “If you wouldn’t have done that, I think you’re in the sport for the wrong reasons.”

Austin Hill was eliminated from the Playoff after crashing out on Lap 189 and causing the 11th caution of the action-filled race. Gilliland fell from seventh to 10th after the final restart and missed advancing to the Round of 8 by two points.

Zane Smith and Rhodes were the last two drivers to advance to the Round of 8, both finishing two points ahead of Gilliland. They join Creed, Nemechek, Chandler Smith, Matt Crafton, Stewart Friesen and Sunoco rookie Carson Hocevar as the series heads for Las Vegas Motor Speedway on Sept. 24.

How do you feel getting your first career Truck Series victory?

“God is good, God is so damn good. I’ve really been tested here in the last year or two. Tested my faith and I’ve kept it. This is unbelievable. I can’t thank everyone behind me. Safelite, Toyota, KBM, Kyle Busch (team owner) – everybody, Jack Irving (TRD). This is incredible, I’m speechless right now.”

Were you starting to wonder if you would get a win in this series?

“I feel like truck racing is definitely the hardest out of all three series right now. In 2019, I felt like I was really, really good. Nothing’s changed about me, the competition has just gotten harder. Had to go to work and do a lot more. More studying and it finally paid off. God is just so good and I’m just so happy. This is unbelievable.”

What was going through your mind when you knew you had to win to transfer in the Playoffs?

“2019. That’s all I’ve been talking about all weekend is what I would do different in 2019 on that restart because of how damn hard these truck races are to win. It came down to it and I’ve been preparing myself all week for it. Just got a good launch. I can’t thank everybody enough that’s on this Safelite Toyota. This has been a heck of a journey and my faith has definitely been tested. Just keep on digging.”

How do you approach the next round of the Playoffs?

“I think everybody’s confidence is really high now for sure. I definitely think we’re going to be pretty good going into the next round.”