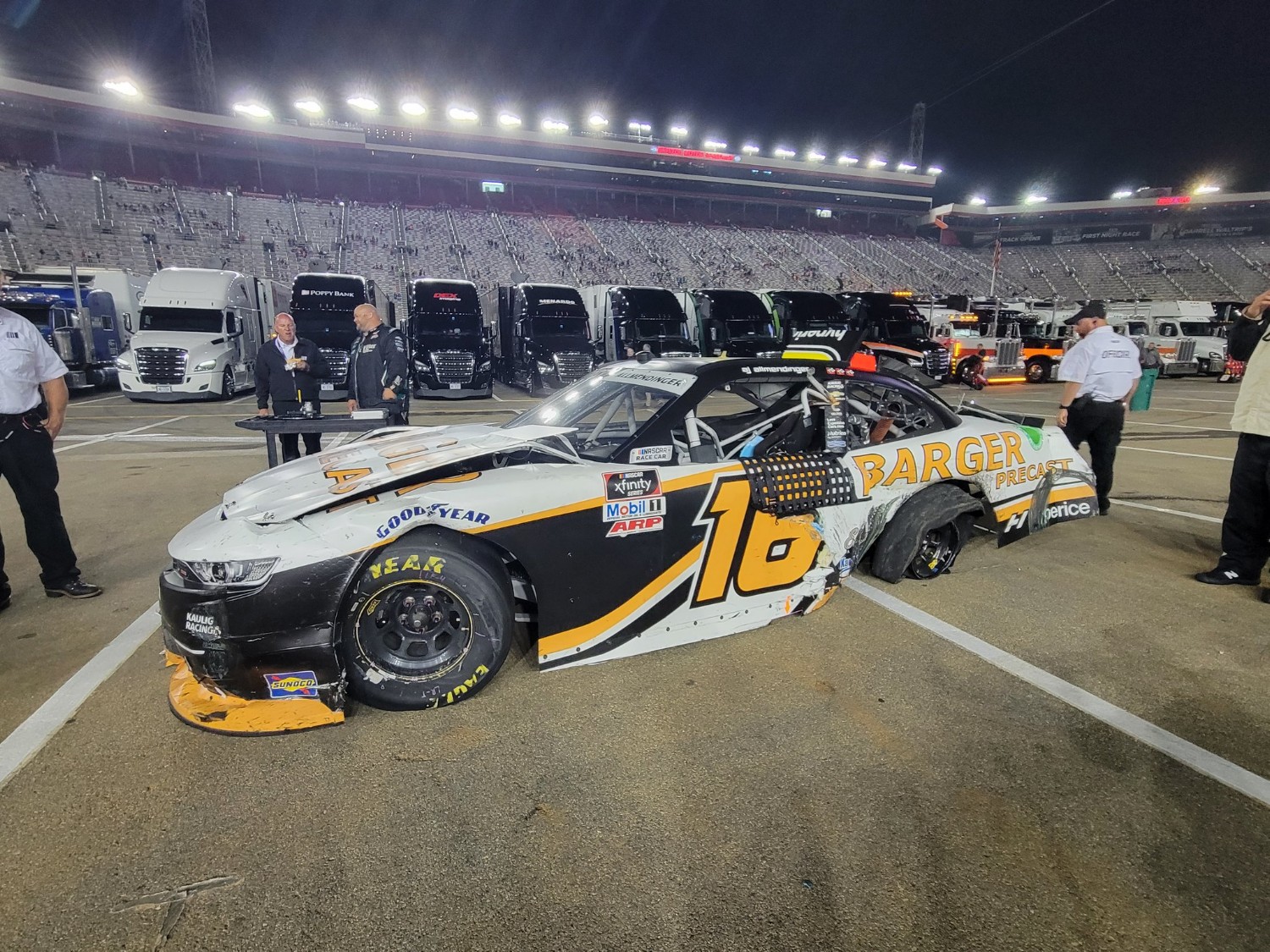 With cars bouncing off each other like pinballs through two laps of overtime, AJ Allmendinger took his No. 16 Kaulig Racing Chevrolet three-wide to the bottom, passed Justin Allgaier and Austin Cindric on the final lap and won Friday night’s Food City 300 at Bristol Motor Speedway.

The two came over the finish line sideways in overtime. It was one of the wildest finishes in the history of Bristol Motor Speedway.

Allmendinger only led one lap, the most important lap, the last one.

The victory gave Allmendinger the NASCAR Xfinity Series Regular Season Championship by 10 points over Cindric, who held the race lead when the 10th and final caution flag flew on Lap 297 of 300 after Allgaier turned JR Motorsports teammate Sam Mayer in Turn 1.

Not your normal entrance into Victory Lane, but what a hell of a finish! @AJDinger #ItsBristolBaby #NASCAR #FoodCity300 @FoodCity @KauligRacing pic.twitter.com/1pgDTvMhCz

A caution on Lap 297 of the 300-lap event at the .533-mile concrete oval bunched up the field and set up an overtime restart for the regular-season finale. Cindric held the lead for the restart, while Allmendinger restarted on the inside of the front row.

Allmendinger spun his tires, but he was able to get back alongside the No. 22 Team Penske Ford of Cindric, passing him after taking the white flag. Cindric made a move on the inside at the exit of Turn 4 coming to the checkered flag when he made contact with Allmendinger’s No. 16 Kaulig Racing Chevrolet, sending both cars into the inside wall after Allmendinger crossed the line first for victory.

The finish was also a battle for the regular-season championship, which Allmendinger was able to clinch with the win over Cindric. Allmendinger came into Saturday night’s race just five points ahead Cindric.

“I expected to get run into,” Allmendinger said. “It happened that previous corner. It’s frustrating getting hit that hard coming to checker, but we’re battling for the win. It’s Bristol, baby. That’s what it’s all about.

“I haven’t had a lot of chances to get a win at Bristol, so you know what? When you have a chance to do it, you’ve got to go do it. If I don’t take that chance, I don’t belong in a race car because my team deserves the win.”

Under the circumstances, Cindric exhibited remarkable restraint in his post-race interview.

“I thought we had a great battle all season long up to this point, so congratulations to Kaulig and AJ,” said Cindric, who led 75 laps, third-most behind Allgaier’s 92 and Daniel Hemric’s 78. “Those guys didn’t want us to win really bad, and I hate that it completely destroyed our Ford Mustang.

“That’s all I’ve got, man… It’s looks like the 7 (Allgaier) just got loose there (in spinning Mayer), and AJ obviously just drove straight through us. You’ll have that in green-white-checkered racing.”

.”I’m sure everybody in the grandstands tonight will remember this one.  I certainly will.  That’s two years in a row in this race that I feel like we should have won.  That’s a lot of races in this neon yellow car that I feel like we should have won this year, so really disappointed for Menards, Richmond, Team Penske — all the hard work these guys put in.  We put ourselves in position.  That’s all you can ask for and I guess that’s short track racing.”

The victory was Allmendinger’s first at Bristol, his fourth of the season and the ninth of his career. The final lap of overtime was the only lap he led, as the race went six laps past its scheduled distance of 300 circuits.