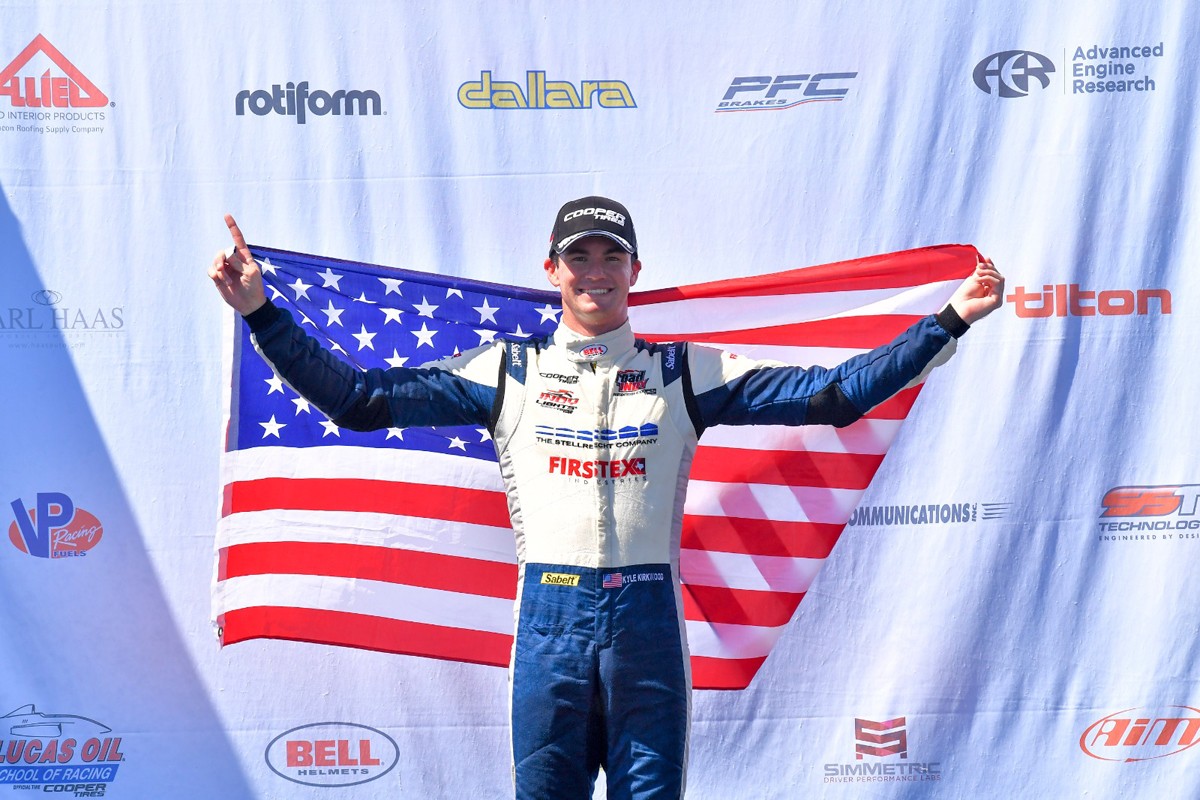 Kyle Kirkwood gave the appearance of being in a class by himself in today’s Indy Lights Grand Prix of Monterey Presented by Cooper Tires. The 22-year-old from Jupiter, Fla., led from green flag to checkered flag for a dominating eighth victory of the season for Andretti Autosport. It was enough to move him back into the championship points lead after his closest rival, David Malukas, from Chicago, Ill., finished a disappointed fourth for HMD Motorsports.

Kirkwood began his weekend by posting the second fastest time in the opening practice session yesterday morning, less than a hundredth of a second behind Andretti Steinbrenner Racing teammate Devlin DeFrancesco. In qualifying later in the afternoon he secured the fifth Cooper Tires Pole Award of his phenomenal rookie campaign.

Kirkwood made an exemplary start from pole position under a sunny sky this afternoon and was never seriously challenged during the 30-lap race at the undulating WeatherTech Raceway Laguna Seca. He completed the first lap almost a second clear of outside front row starter and fellow rookie Lundqvist. and extended his lead to over 7.6 seconds by the time the caution flags flew following 17 laps when Christian Bogle (Carlin), from Covington, La., ended his day in the gravel trap at the Mario Andretti Hairpin, Turn Two, following an apparent mechanical problem.

Unable to match Kirkwood’s pace, Lundqvist had remained under pressure from Malukas until the points leader’s car suddenly snapped sideways at Turn Four on his ninth lap. Malukas did well to regain control but not before losing a place to Pedersen.

Kirkwood lost no time in reasserting his authority when the race was restarted with nine laps remaining. Kirkwood stretched his lead to over 1.8 seconds on the first lap and continued to build the margin before easing off on the final lap around the 2.238-mile road course and taking the checkered flag a comfortable 6.6515 seconds clear of Lundqvist.

Pedersen maintained his strong run of form by notching his fifth top-four finish in a row, with Malukas chasing him home in fourth. Rasmus Lindh, from Gothenburg, Sweden, finished fifth for Juncos Hollinger Racing.

Italian-Canadian DeFrancesco, from Miami, Fla., crossed the line in sixth before the addition of a five-second penalty for jumping the restart dropped him to ninth behind Sting Ray Robb (Juncos Hollinger Racing), from Payette, Idaho, Manuel Sulaiman (HMD Motorsports), from Puebla, Mexico, and Danial Frost (Andretti Autosport), from Singapore.

Robb earned the Tilton Hard Charger Award after starting the race in 10th.

In addition to turning a five-point championship deficit into an eight-point lead, Kirkwood also was fastest in a second qualifying session this morning, thereby ensuring he will start on pole position for tomorrow’s 18th round of the championship. The race is set to go green at 10:15 a.m. PDT, immediately prior to the Grand Prix of Monterey NTT INDYCAR SERIES headline event.

Provisional championship points after 17 of 20 races:

Kyle Kirkwood (#28 Road to Indy/Cooper Tires/Construction Contractors’ Club-Andretti Autosport Dallara-AER IL-15): “This is absolutely massive. When I saw the caution come out, I knew I had to pull ahead as quickly as I could and getting a one-second lead on that first lap was crucial because they’ve been good on the straights all year, especially with push-to-pass. I am absolutely ecstatic with our performance. We were unsure coming into this weekend because the team hasn’t had the best performances here but now, we’re miles ahead, it’s our best track all year. The (No.) 28 car was on rails; it was just perfect.

“But we can’t let up, we need more wins. It’s between David and me, and it needs to be us. Before this weekend, I knew this could be the championship decider. We’ve been fast all weekend, in qualifying and in the race. I couldn’t be happier, there wasn’t anymore we could do. I have to give it up to the team for the great car they gave me.”

Linus Lundqvist (#26 HPD/Global Racing Group/FX Airguns/Paytrim/JULA-Global Racing Group w/HMD Motorsports Dallara-AER IL-15): “We’re here to win but on days you can’t win, it’s good to be second. We have a bit of work overnight to try to catch Kyle, but tomorrow’s a new day. It’s a long way down into Turn One, hopefully we can figure something out, but it’s good to have another shot at it. This track is one of the places we tested at so it’s good to come back somewhere familiar. Huge thanks to the team, who has worked night and day to get the car we have. Hopefully we can get one more spot tomorrow.”

Benjamin Pedersen (#24 DirtFish/Bell Helmets/The Heart of Racing/Colibri Capital-Global Racing Group w/HMD Motorsports Dallara-AER IL-15): “It was a really tricky race in terms of tire management, especially the rear tires once we hit the halfway point. I tried my best to pressure Linus but it’s hard to stay close here. We’re happy with the result, sitting a strong fourth in the championship and our fifth straight (top-four). We’ll try to make the car better overnight, help the rears last longer, and see how I can make myself better for tomorrow.”