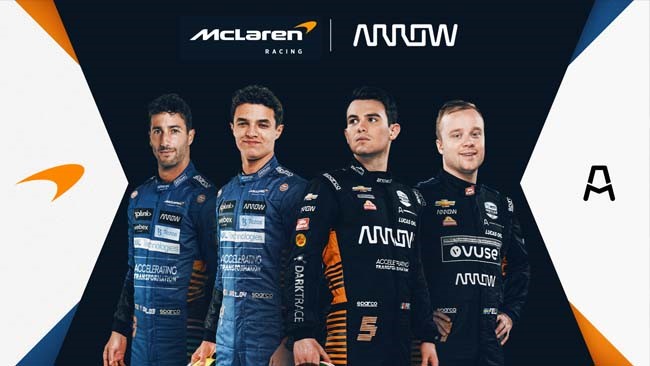 McLaren Racing and Arrow Electronics, the global technology and innovation business, today announced a long-term multi-year partnership extension which will see Arrow continue to support McLaren in its drive to achieve success with the McLaren Formula 1 and Arrow McLaren SP IndyCar teams. Arrow Electronics will continue as title sponsor of Arrow McLaren SP, while it continues as a partner of the McLaren F1 team.

Since 2019, the partnership between Arrow Electronics and McLaren Racing has enabled the two organizations to put a shared belief in technology and innovation to at the center of a joint commitment to drive progress and bring services and solutions to the team and their respective networks.

“Arrow Electronics is a valued partner of McLaren Racing across both our Formula 1 and IndyCar programs. This long-term partnership extension is a great reflection of the strong relationship we have been building and the productivity of our partnership since the beginning in 2019. With our recent majority investment in Arrow McLaren SP and Arrow’s deep involvement in the team since 2015, our partnership is strengthened further as we progress on our common journey and shared ambitions to win together.”

“Arrow Electronics is committed to innovation in automotive and transportation technologies.  Our engineers work side-by-side with the race team, and we couldn’t be happier with the strength of our teams’ positions in both IndyCar and Formula 1.  We look forward to many more wins together on and off the track.”

“The entire team is looking forward to our continued journey with Arrow Electronics. I am excited that they will continue as a key part of this team as we take the next steps toward regularly competing for wins and championships. They have not only been a part of Arrow McLaren SP since 2015 but also a big part of my own life, as they have been instrumental in our efforts to better the lives of people with paralysis. Arrow has been a great partner in developing the semi-autonomous SAM Car program and other exciting projects. We wouldn’t be where we are without their support.”