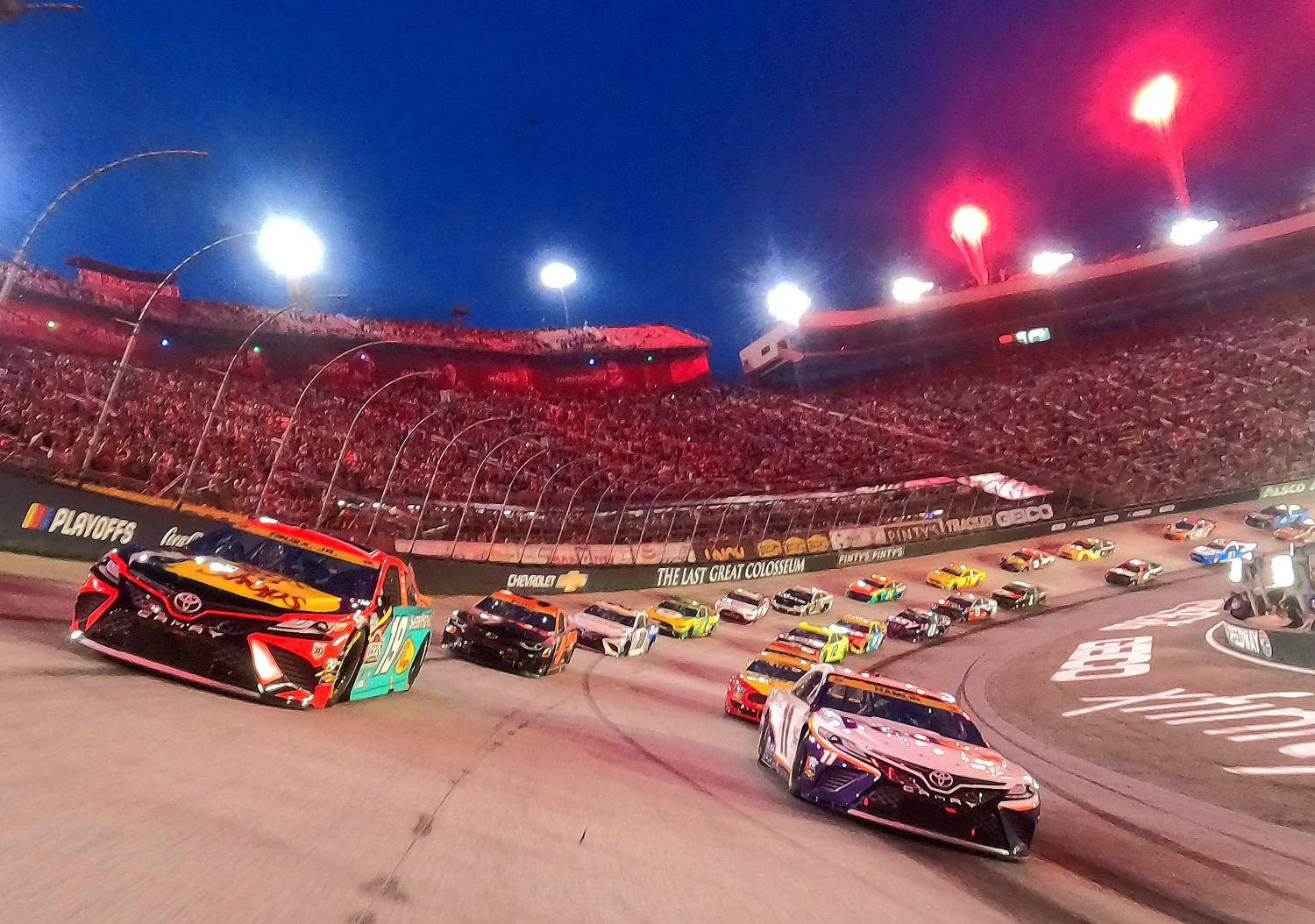 The exciting and drama-filled Bass Pro Shops NRA Night Race Saturday at Bristol Motor Speedway was so popular with fans that it set a record in the online fan poll conducted by veteran NASCAR journalist Jeff Gluck of The Athletic that simply asks, “Was it a Good Race?” BMS now holds the top three spots in the poll.

Saturday night’s race energized fans with a thrilling finish that featured Kyle Larson racing past Kevin Harvick in the closing laps. Larson made his move to take the lead and pass Harvick with a slide job, and Harvick’s machine made contact with the bumper on Larson’s Chevy, but Larson was able to control it even though it got out of shape. Larson then pulled away to take the checkered flag.

It was Larson’s first BMS victory and his sixth win of the season. Sparks also flew post-race as Harvick and Chase Elliott had an animated nose-to-nose discussion in the pit area after the two were not pleased with each other following several on-track skirmishes. The race also featured a couple of drivers, Alex Bowman and William Byron, who entered the race outside the top 12 but managed to race their way into the next round of the Playoffs with strong Bristol finishes.

More than 23,000 fans participated in the poll and a record 95.7 percent voted yes in the poll, that it was a good race. The race took over the No. 1 spot in the poll by moving past the 2020 Bristol Spring Race, which held firm at 94.9 percent. Another Bristol Motor Speedway race, the 2018 Bass Pro Shops NRA Night Race, sits third on the list with a 94.8 percent vote. BMS has another race in the top 10 of the list, as the 2019 Bass Pro Shops NRA Night Race comes in at sixth overall with a 94.1 approval rating.

“We are so thankful to the thousands of fans who voted for the Bass Pro Shops NRA Night Race in Jeff Gluck’s popular ‘Was it a Good Race’ fan poll,” said Jerry Caldwell, executive vice president and general manager, Bristol Motor Speedway. “We are so proud to see Bristol races in the top three positions in that poll. We have been very blessed here to have many thrilling races throughout the decades and Saturday night’s race was one for the ages and will certainly always be remembered as one of the greats here at The Last Great Colosseum.”

The 2020 Food City Supermarket Heroes 500, second on the list, was won by Brad Keselowski after he sprinted past Elliott and Joey Logano who tangled on track in the closing laps. The 2018 Bass Pro Shops NRA Night Race, third on the list, has been called an ‘Instant Classic’ after Kurt Busch emerged to take the checkered flag after several different leaders appeared to have the race under control throughout the race. The 2019 Bass Pro Shops NRA Night Race, which was won by Denny Hamlin after passing Matt DiBenedetto in the closing laps, is fourth on the Gluck ranking list, with a 94.1 percent approval rate.

The Jeff Gluck ‘Was it a Good Race?’ fan poll is conducted via the social media platform Twitter and was started in 2016. A Bristol Motor Speedway event has held the top spot now since August 19, 2018.

The next NASCAR Cup Series race scheduled for Bristol Motor Speedway is the Food City Dirt Race, to be held under the lights on Sunday April 17, 2022.