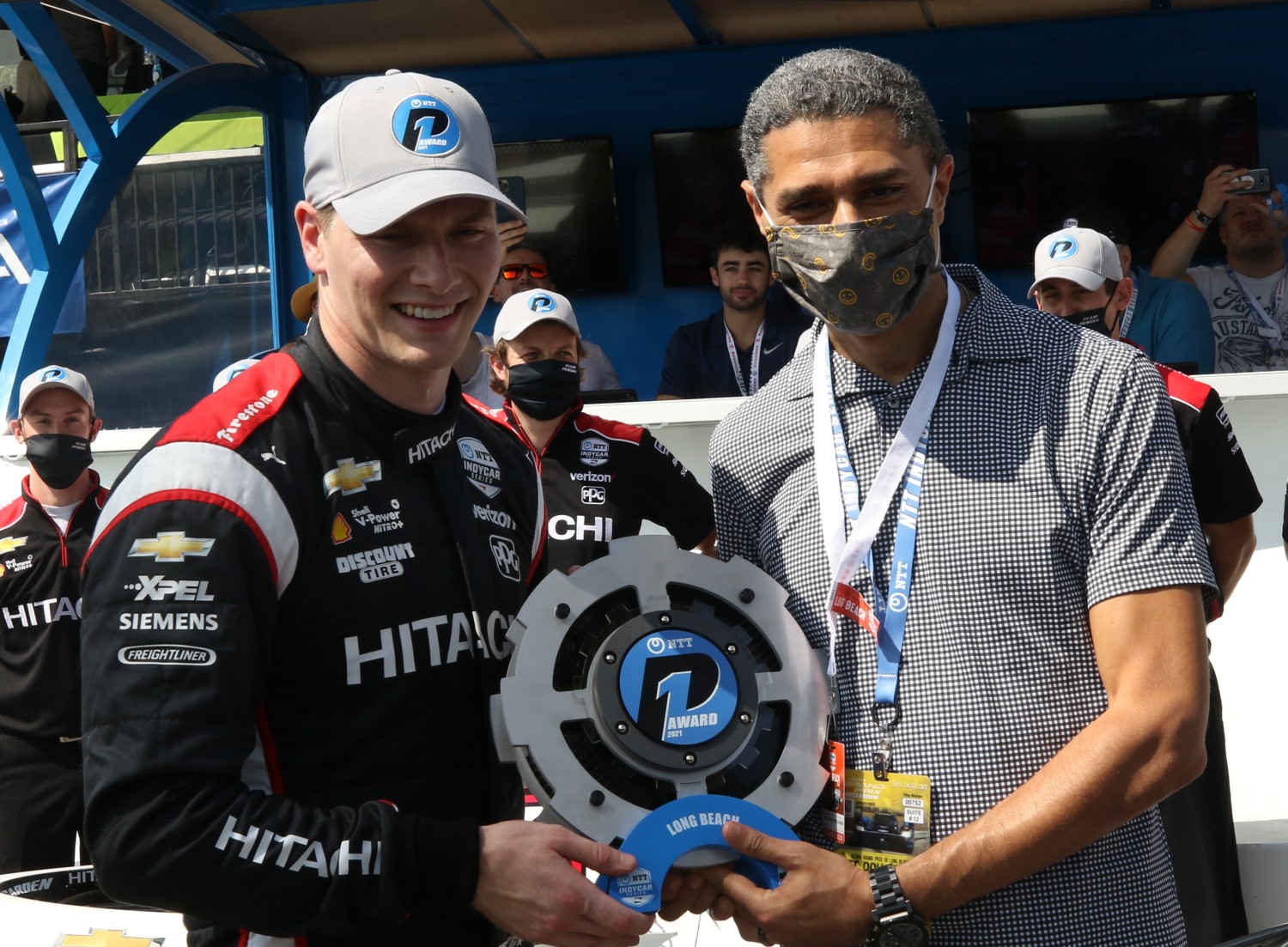 Josef Newgarden did what he had to do if he wants to win the 2021 IndyCar title – start from pole, lead the most laps and win the race and hope Alex Palou and Pato O’Ward run into trouble.

Newgarden turned a lap of 1m08.2241s to win pole for the Acura GP of Long Beach with a massive final lap as the clock went to zero. Step 1 complete.

Six-time and reigning series champion Scott Dixon will join Newgarden on the front row after qualifying second at 1:08.4422 in the No. 9 PNC Bank Grow Up Great Honda.

Four-time Indianapolis 500 presented by Gainbridge winner Helio Castroneves qualified third at 1:08.4827 in the No. 06 Meyer Shank Racing Honda, easily the best start of his partial season. Castroneves’ previous best start was eighth for the Indy 500, which he won. His best start in four previous road or street course races this season was 15th at Nashville.

Joining Castroneves on the second row will be 2016 series champion Simon Pagenaud, whose best lap was 1:08,6514 in the No. 22 Menards Team Penske Chevrolet.

Felix Rosenqvist qualified fifth at 1:08.7461 in the No. 7 Arrow McLaren SP Chevrolet, while rookie Romain Grosjean rounded out the Firestone Fast Six at 1:08.7577 in the No. 51 Nurtec ODT Honda.

Palou must finish 12th or better – or 13th or better if he leads a lap – to clinch his first NTT INDYCAR SERIES championship in the No. 10 NTT DATA Chip Ganassi Racing Honda. He’ll start 10th on the grid after a dramatic end to the round of 12 in qualifying in which a handful of drivers, including Palou and closest title rival Pato O’Ward, on fast final laps were forced to slow due to a local yellow flag for an incident involving Will Power.

Newgarden’s only chance to win the title is to win and lead the most laps Sunday, with Palou finishing 25th or worse in the 28-car field.

“It’s very improbable for us to win this championship,” Newgarden said. “So, our goal is to win the race tomorrow. Let’s finish our season on a high note, and we’ll see what happens. I think it’s pretty unlikely, but you never say never in this sport.”

“There’s some guy roaming around Long Beach that has just been yelling all weekend and getting us fired-up (laughter), and I was pretty much screaming that whole last lap,” said Newgarden.

“He’s at the track somewhere. He’s just getting me hyped. He was getting all of us hyped. He needs to be in this pit box.

“I’m so happy. It’s been a little bit demoralizing the last couple of weekends where we’ve qualified. We’ve had really good cars. The team has been doing a phenomenal job, Gavin (Ward, Race Engineer) and all the boys. They’ve been killing it.

“To start where we’ve started these last couple of races has just taken the life out of me a little bit. So, I’m so pumped that we were able to be quick here. I think we’ve got the package, for sure, with Team Chevy. I wish we had more of a fight with Colton (Herta). He was going to be really tough to beat today. It’s a shame we didn’t get to fight him straight up, but you know what? We accomplished our job for today, and now we have to go after it tomorrow.”

“Yeah, I mean look, we’ve fought hard all year. We’ve had ups and downs. It’s very improbable for us to win this championship. So, I think our goal is to win the race tomorrow. Let’s finish our season on a high note. Everyone here deserves that. We’ll see what happens. I think it’s pretty unlikely, but you never say never in this sport.”

“We always want to maximize our potential. If second is what we can do for the year, then we want to get that done. I know that’s what’s important to Roger (Penske) and the team and the same with me. So, we’re going to do everything we can to finish as high as possible and we’ll see where the chips fall at the end of the day.”

Points leader Alex Palou will start 10th and 2nd in points Pato O’Ward 8th after IndyCar officials turned a blind eye to drivers racing through a yellow flag that resulted in Palou and O’Ward getting the IndyCar screw.  Newgarden drives for the owner of the series. Hmmm….

The team that really embarrassed themselves was Andretti Autosport.  Always strong here at Long Beach, they failed to get even one of their four drivers in the Fast Six.

Colton Herta, quickest in both practice sessions this weekend, was eliminated from the first round of qualifying and will start 14th. Herta hit the concrete retaining wall with the left side of his No. 26 Gainbridge Honda late in the second group while running on Firestone primary “black” tires. He came to the pits for a set of Firestone alternate “red” tires, but the toe link suspension piece bent by the earlier contact broke on his final flying lap on “reds,” and he was forced to abandon the run.

“It was a handful until it wasn’t bent anymore and just broke,” Herta said. “It was my fault, unfortunately. It will make for an interesting race, though. We’re starting 14th and have two sets of new reds. Could be a good thing, a charge to the front tomorrow.”

James Hinchcliffe qualified fastest (7th) for the Andretti squad, followed by Ryan Hunter-Reay (11th), Herta 14th, while the worst driver on the team, Alexander Rossi, will start down in 15th. After lucking into an Indy 500 win in his rookie year in IndyCar, it’s been all downhill for Rossi.

Rossi has one more year left on his contract before Michael Andretti has to decide whether to find a faster driver. He brought in Romain Grosjean for the next two years to replace Hunter-Reay. Who will Andretti go after next to replace Rossi?