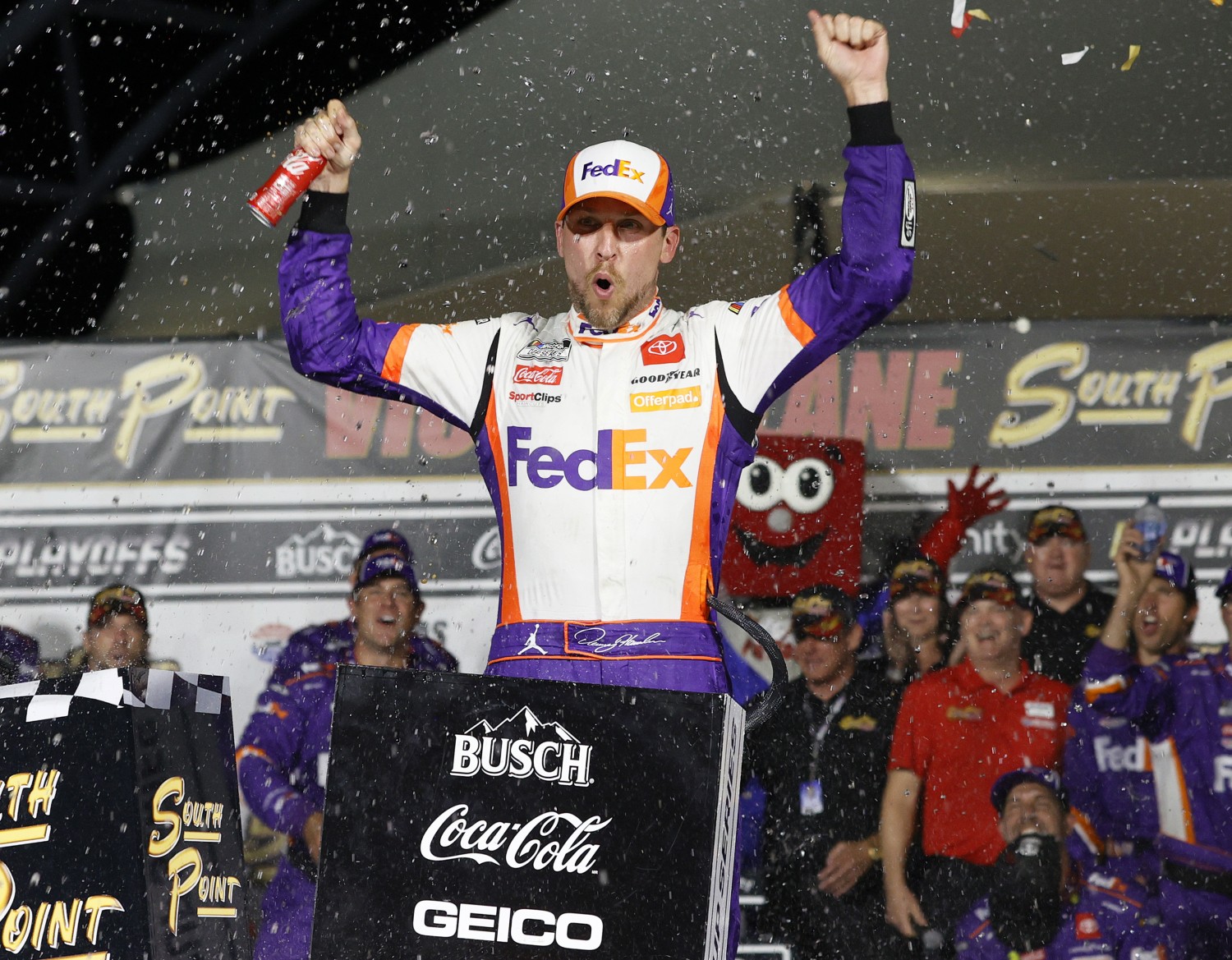 Denny Hamlin drove his JGR FedEx Toyota to a dominant win in the South Point 400 NASCAR Cup by holding off a charging Chase Elliott in the #9 Hendrick Chevy by 1/2-second.

Hamlin led a race high 137 laps and it was his first-ever win at Las Vegas Motor Speedway, and with the win took an automatic bid into the next round of the Playoffs.

Kyle Busch came home third in the 2nd JGR Toyota ahead of the 3rd JGR Toyota of Martin Truex Jr. and the JGR team is coming on strong at the end of the season.

Ryan Blaney rounded out the top-5 in his Penske Ford.

Pole-starter Kyle Larson led 95 laps but faded to a 10th-place result in the No. 5 Hendrick Motorsports Chevrolet. Larson prevailed in Stage 1, and Hamlin won Stage 2.

Joey Gase was involved in the race’s most serious incident, his No. 15 Rick Ware Racing Chevrolet crashing into the outside retaining wall through Turns 1 and 2. NASCAR officials said Gase was transported to a local medical facility for further evaluation. Gase finished 37th in the 38-car field, completing 84 laps.

Tyler Reddick, who just missed advancing to this three-race Playoff round by a mere two-points last week, finished sixth after running among the Top-3 for much of the late race laps.

Hamlin led seven different times, won Stage 2 and took the lead for good with 39 laps remaining – facing that challenge from Elliott in the waning laps of a what was a relatively clean race – only one yellow flag outside of the competition caution and two stage breaks.

The only other caution for an on-track incident came out for a single car accident involving driver Joey Gase, who whose No. 15 Chevrolet lost a tire and made heavy impact with the wall. He was examined in the Infield Care Center but transported to an area hospital for a precautionary exam.

“It feels so good to win in Vegas, last couple times I’ve been so close but just didn’t have the right breaks, but they got the car great and great to hold those guys off,” said Hamlin, who earned his 46th career victory and becomes the first driver to officially earn a shot into the Playoff Round of 8.

“I’m so happy to not have to worry about the next two weeks, but I am a professional and I will work just as hard each and every week to win.”

Obviously disappointed not to win, Elliott was still enthusiastic about his runner-up finish – his 12th top five of the season – rallying from a pit stop strategy that put him a lap down at one point.

“We were really close, just not quite close enough,” Elliott said. “Denny did a really good job controlling the gap to me and he was having a hard time [lapping] with the 21 (Matt DiBenedetto).

“Super close. Really proud of our NAPA team and I feel like we’ve been performing at a really nice level the last three or four weeks, just haven’t had great results to show for it.

“Proud of the effort tonight and looking forward to the next two [races]. It’s going to be wild.”

Elliott’s Hendrick Motorsports teammate Larson certainly looked like the driver to beat early on. He led 95 laps and won his series best 15th Stage win in the opening portion of the night, but a different pit strategy put him a lap down mid-race and he never fully recovered to challenge for the lead again.

While Hamlin earned the automatic bid into the next round of the Playoffs, Larson still leads the championship standings – 22 points over Kyle Busch.

With his seventh-place finish Keselowski moved into the eighth position in the standings, with races at Talladega, Ala. and the Charlotte ROVAL remaining to determine which eight drivers move on in the championship battle.

Hendrick Motorsports William Byron, who suffered a tire problem late in the race, finished 18th and is now four points below the cutoff line. Even with his Top-10, Harvick remains ninth in the standings – still looking for his first victory of the season.

Hendrick driver Alex Bowman finished 22nd and is 13 points behind Keselowski and Joe Gibbs Racing’s Christopher Bell finished 25th, two laps down Sunday night fighting through several setbacks. He is 25 points out of that transfer position.

The second race in this Playoff NASCAR Cup Series round is the YellaWood 500 next Sunday at Talladega (Ala.) Superspeedway (2 p.m. ET, NBC, MRN, SiriusXM NASCAR Radio). Keselowski won at Talladega this April. Hamlin is the defending Playoff race winner there.

How excited are you to score this win and move on to the round of 8?

“So happy for our FedEx Office Toyota team. Joe Gibbs Racing just gives us great race cars. That’s what I’m so proud of is to drive for those guys. Can’t thank them enough for everything they do. It feels so good to win in Vegas. Last couple times I’ve been so close, just didn’t have the right breaks. They dialed the car in great. Great to hold those guys off.”

Do you feel a sense of relief to move on into the next round?

“It does. Especially with this crazy round coming up. We’ve just done a great job on this racetrack and getting it a lot better for me over the course of my career. 14 years of not really being that good. Chris (Gabehart, crew chief) and the whole FedEx team have been great – great ride with them. We’ve added another trophy to the trophy case, and now we get to go and worry about the next round.”

How much were you working on this car?

“The last few laps it faded a little bit – getting a little tight, but overall, I thought in the long run it was pretty good. It’s something that we really studied and worked on it, and glad all that hard work is paying off.”

How good do you feel going into Talladega?

“I feel so good. I can’t tell you how good these next two weeks are going to be.”