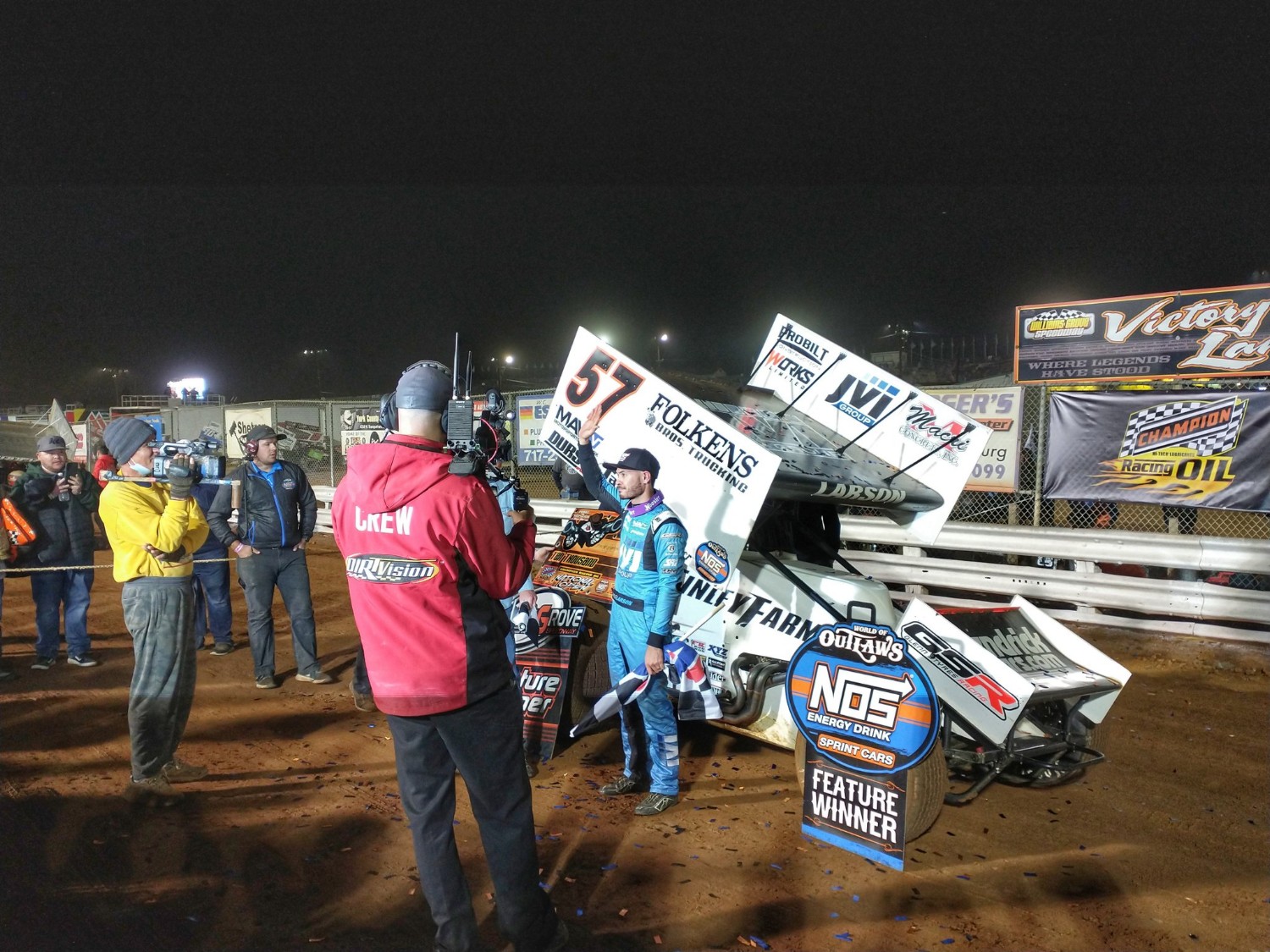 Kyle Larson in his first sprint car start since the Knoxville Nationals goes out and beats the Outlaws, Posse, and others at Williams Grove Speedway. One of those moments that shouldn’t happen, but Larson brings to reality.

On Friday at Williams Grove Speedway, the Elk Grove, CA superstar picked up right where he left off in August when he last drove a sprint car: in victory lane.

His pursuit of the triple crown sweep, something that’s been done only twice in World of Outlaws NOS Energy Drink Sprint Car Series history, became more of a reality with a preliminary win at the 59th annual Champion Racing Oil National Open Friday night.

The Hendrick Cars #57 driver already won the Kings Royal in July, the Knoxville Nationals in August, and now eyes his first-career title at the $75,000-to-win National Open. If he can pull off the rare feat, he’ll stand alongside Doug Wolfgang (1985) and Donny Schatz (2007) as the only men in history to ever achieve the milestone.

The Paul Silva-owned entry had just about everything go right prior to Larson’s fourth-career win at the Mechanicsburg, PA 1/2-mile, and the 29-year-old ace knows they’ll have to step up for tomorrow’s 40-lap main event.

“We really just caught a lot of breaks all night,” Larson admitted afterward. “Didn’t qualify well, got a little lucky in the heat, and then the cautions fell at the right time in the Feature. Hopefully, we didn’t use up all of our luck before tomorrow. It’s been since Knoxville when I was last in a Sprint Car, I had to get used to how fast it felt again early in the night.”

From there, Larson cruised to a 0.905-second margin of victory in his fourth World of Outlaws win of the 2021 season.

“I started sniffing dirty air, it was getting dusty, hard to see the cushion, and I just got over it,” Larson spoke on his mistake. “Logan was good all night, so I wasn’t surprised to see him slide me down there. I knew I just had to make a couple of good decisions to hold the lead.”

“I didn’t think I would get the chance to come race here with the NASCAR Playoffs, but I’ve got a great team that allows me to chase an awesome goal,” Larson added. “It’s always fun to race here in Central PA, I would love to win this event tomorrow night.”

America’s best driver in the current era, Kyle Larson, has a big weekend ahead of him.

Able to switch from dirt cars to pavement without blinking an eye, the talented Larson first, heads to Pennsylvania and the Williams Grove Speedway National Open today and tomorrow to race against the best open wheel dirt track drivers in the country in the World of Outlaws NOS Energy Drink Sprint Car Series and the Pennsylvania Posse. Then it’s off to Talladega for the big NASCAR Cup weekend.

Much to the chagrin of the ‘Libtard Cancel Culture’ who tried to destroy his career, Larson has been cleaning up in the big money events all year.

Larson, who will again pilot the No. 57 entry with Paul Silva on the wrenches, has already earned two massive paydays this season.

While Larson has never won the National Open, he does have three victories at Williams Grove Speedway during his career. One of those victories came earlier this year with the All Star Circuit of Champions.

So far this year Larson has 10 410 sprint car victories to go along, three dirt late model victories and six NASCAR Cup Series and a good chance to win the NASCAR Cup title.