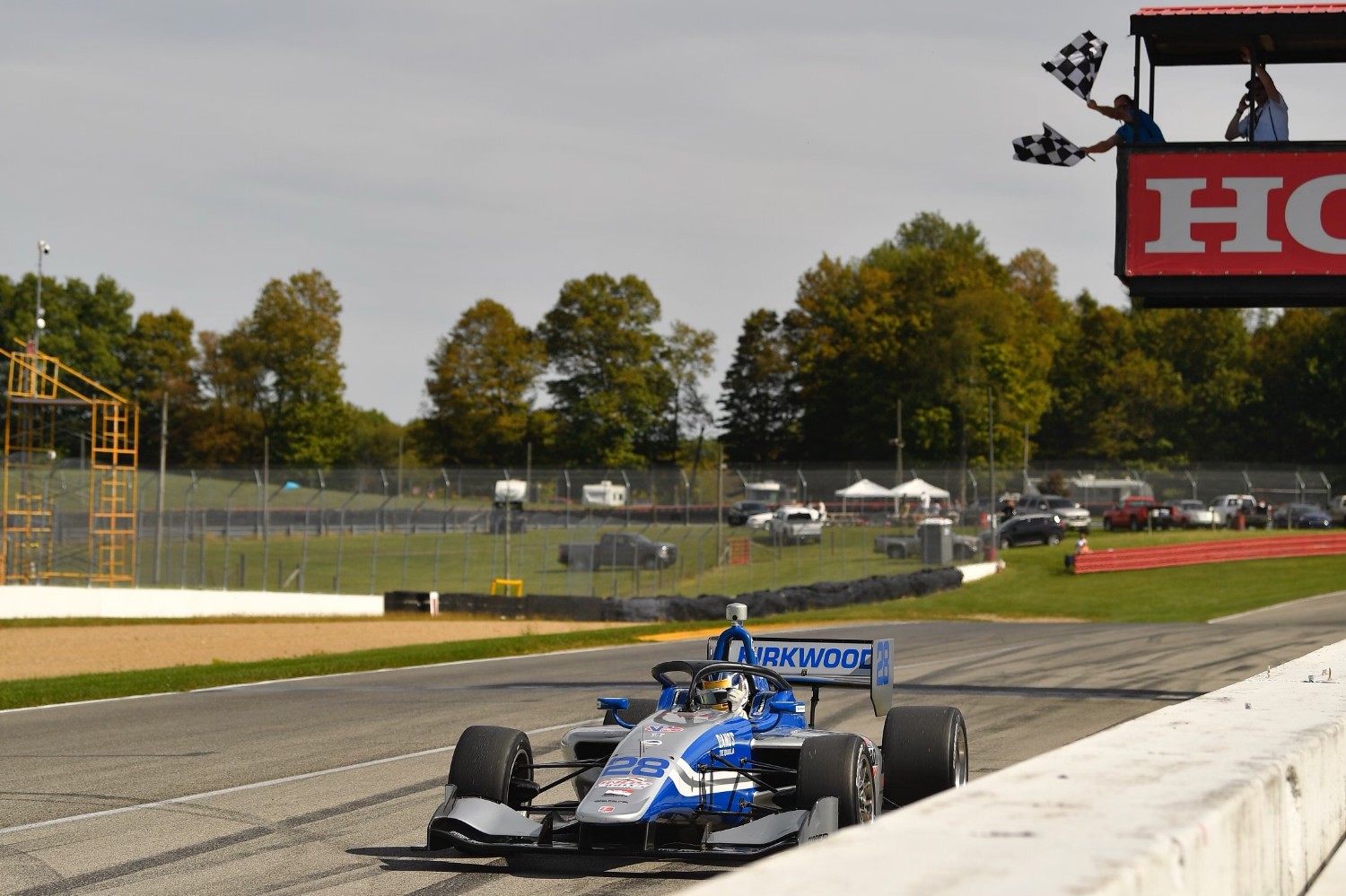 A fourth consecutive victory for Kyle Kirkwood and Andretti Autosport has taken him to the brink of clinching this year’s Indy Lights Presented by Cooper Tires championship crown. The title also would secure a scholarship valued at $1.3 million to ensure entry into a minimum of three NTT INDYCAR SERIES races in 2022, including the 106th Indianapolis 500 presented by Gainbridge.

Kirkwood, 22, from Jupiter, Fla., further solidified his claim today at the Mid-Ohio Sports Car Course by leading throughout the 30-lap first leg of this weekend’s VP Racing Fuels Championship Weekend Presented by Cooper Tires. His 10th victory of the season matches the record set by the late Greg Moore in 1995.

Kirkwood’s closest rival, David Malukas, from Chicago, Ill., once again couldn’t match the rampant Floridian’s speed as he finished a distant second, 6.4367 seconds adrift at the checkered flag for HMD Motorsports. However, that result was enough to virtually clinch the coveted Team Championship for the Brownsburg, Ind.-based squad, which needs only to start tomorrow’s season finale to secure its first-ever Road to Indy title.

Unbeaten in seven previous Road to Indy starts at the challenging 2.258-mile Mid-Ohio course, Kirkwood maintained his imperious form by posting the fastest time in practice yesterday and then secured his seventh Cooper Tires Pole Award in qualifying this morning.

Malukas struggled in practice, only fifth on the timing charts, but he bounced back in qualifying to briefly hold the top spot before being bumped down to second place by Kirkwood.

A clean start saw Malukas challenge for the lead on the entry to Turn One, but Kirkwood took full advantage of his inside position to maintain his edge. The two remained close together for the opening five laps before Kirkwood was able to stretch his legs and begin to pull away.

By the midpoint of the race, Kirkwood held almost a three-second margin which he continued to extend before easing off on the final lap once his victory was assured.

Kirkwood now holds a commanding 22-point lead over Malukas, which means that one more Cooper Tires Pole Award in the final qualifying session tomorrow morning and being able to take the start of the race would be enough for him to become the first driver to win titles in Indy Lights, the Indy Pro 2000 Championship Presented by Cooper Tire and the Cooper Tires USF2000 Championship.

A forceful start by Megennis took him ahead of Andretti Autosport teammate Danial Frost, from Singapore, into third position, which he maintained to the end. Frost actually lost a couple of positions in the early skirmishes before fighting his way back past Sting Ray Robb (Juncos Hollinger Racing), from Payette, Idaho. Frost put the pressure on Megennis for most of the distance before slipping back a couple of seconds in the closing stages.

Fifth place represented the best result of the season for Robb, last year’s Indy Pro 2000 champion. Behind, Sweden’s Linus Lundqvist (Global Racing Group with HMD Motorsports) earned the Tilton Hard Charger Award after fighting his way through to sixth after a disappointing qualifying session left him back in 10th on the starting grid.

The final race of the season will see the green flag at 12:00 p.m. EDT tomorrow, with the starting order to be set during qualifying at 8:45 a.m.

Provisional championship points after 19 of 20 races:

Kyle Kirkwood (#28 Road to Indy/Cooper Tires/Construction Contractors’ Club-Andretti Autosport Dallara-AER IL-15): “First of all, a huge thanks to all the fans who came out today. It’s so nice to see so many supporters for the Road to Indy! What a fantastic race for me and for the Andretti crew, we couldn’t have asked for anything better. We did everything we needed to do, everything’s gone to plan. It’s been so much work to get to this point, so much dedication – this is one big step closer to winning the championship so I’m ecstatic right now.

“David was ahead of me before we started rolling and held that into Turn One, but I think he thought the better of it and gave me the inside line – though I was going to charge him regardless. If we’d had push-to-pass, he probably would have been knocking on the door even more, but we were so consistent. We just have to go do the same thing tomorrow.”

David Malukas (#79 HMD Trucking-HMD Motorsports Dallara-AER IL-15): “I tried to anticipate the start but then hesitated, because I wasn’t sure if it had been too much of a jump so I thought it was only fair to give him the inside line. Without push-to-pass, I just tried working the bars to try to keep up the best I could. I was pushing like crazy, giving it everything I could to try and end this on a high note. I was hitting dust left and right but he never let off. It’s not over until tomorrow but it seems like it’s all but over. When he started pulling away, so much went through my head, everything from this season. Just the fact that we’re sad because we didn’t get the championship, after everything that happened in 2019, shows how far we’ve come. We’ve worked so hard and I’m very grateful.”

Robert Megennis (#27 Sirius/SailPoint/Data Robot/Juniper/Cybereason-Andretti Autosport Dallara-AER IL-15): “We had really good pace that race – if I hadn’t driven off the track, I think I could have pressured David. It would have been tough to get by without push-to-pass, but I could have put up more of a fight. It was the best race pace we’ve had all year, so I’m super happy. I know we can do it again tomorrow, and even better.”