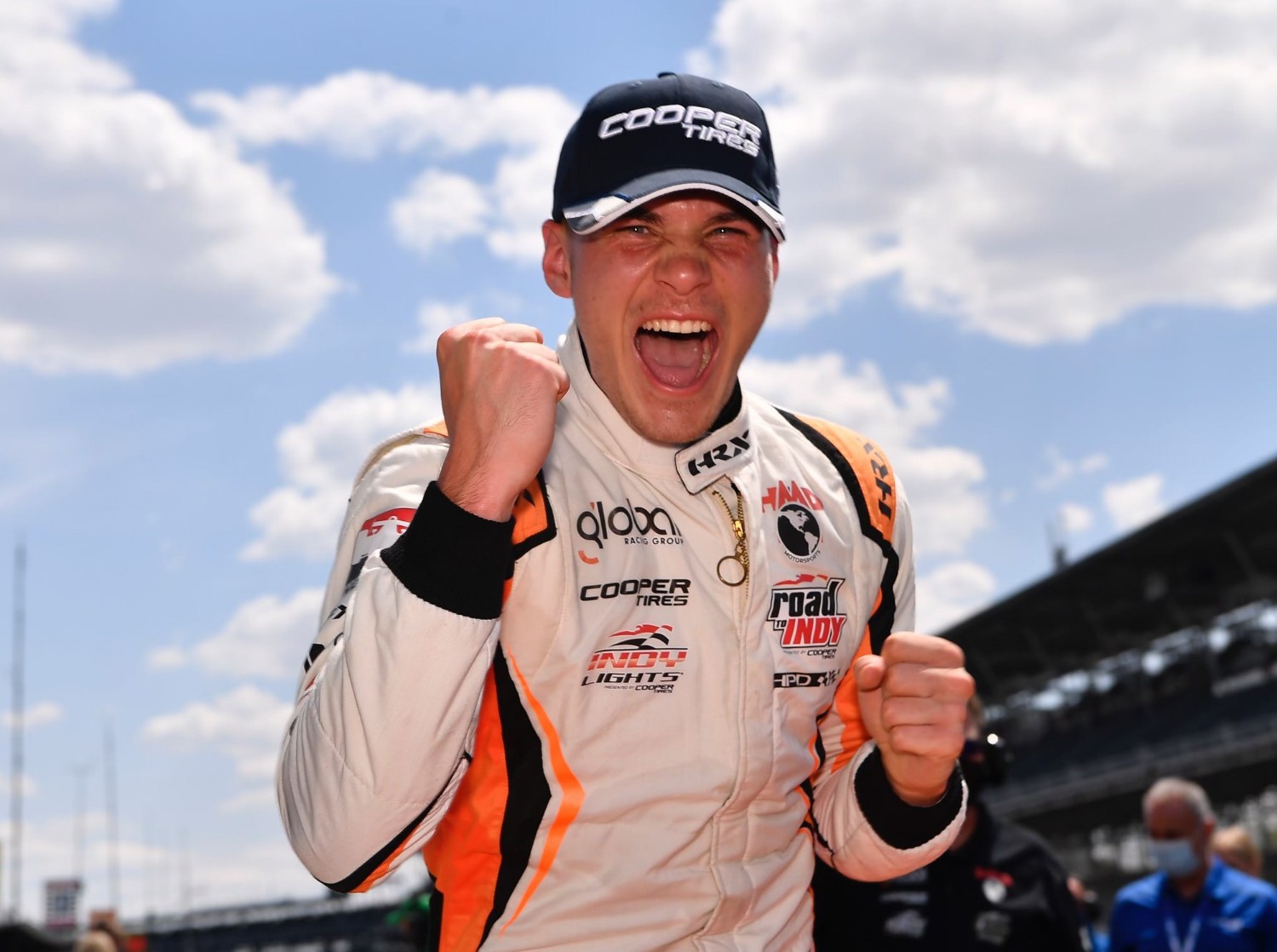 Kyle Kirkwood has become the first driver to win all three categories of the Road To Indy, after clinching the Indy Lights presented by Cooper Tires championship with a 5th place finish in the season finale at Mid-Ohio.  He was really only needing a Top-11 finish to win the title in the pathetically small 12-car field.

Swedish rookie Linus Lundqvist dominated today’s final Indy Lights Presented by Cooper Tires race of the season for Global Racing Group with HMD Motorsports in tricky wet conditions as Andretti Autosport’s Kyle Kirkwood cruised home in fifth to assure himself of the series title. Kirkwood, 22, from Jupiter, Fla., also secured a scholarship valued at over $1.3 million to ensure entry into a minimum of three NTT INDYCAR SERIES races in 2022, including the 106th Indianapolis 500 presented by Gainbridge.

David Malukas (HMD Motorsports), from Chicago, Ill., was the only man with a mathematical chance to wrest away the title from Kirkwood, but his hopes seemed to have disappeared altogether when a mistake at the first corner dumped him from first to last. Incredibly, Malukas stormed back to finish second, his 16th podium finish of the season, but he still fell short of Kirkwood by 13 points, 537-524.

Denmark’s Christian Pedersen finished third for Global Racing Group with HMD Motorsports as the Chicago-based HMD squad wrapped up the Team Championship for the first time.

Entering the final day of the 20-race campaign, Malukas knew his only chance of taking the title was to qualify on pole position and lead most laps – and then hope Kirkwood would finish last – in today’s VP Racing Fuels Grand Prix of Mid-Ohio Presented by Cooper Tires. He accomplished the first task admirably during a wet qualifying session this morning to equal Kirkwood’s tally with his seventh Cooper Tires Pole Award.

Unfortunately, after one additional exploratory lap behind the Pace Car, Malukas’ dream went awry in Turn One when he left his braking too deep and careened off into the gravel trap. He was able to extricate himself, but not before falling to the back of the 12-car field.

Malukas’ hopes were raised slightly by the onset of a full-course caution, due to another incident farther down the field, which at least enabled him to take the restart directly behind all the other cars. After another brief full-course caution when Mexican teammate Manuel Sulaiman spun prior to the green flag, Malukas quickly picked off cars at the restart as Lundqvist made himself scarce at the front of the field.

Five laps after the resumption, Lundqvist, remarkably, was almost 10 seconds clear of Pedersen in second place. And up into third, albeit a further 12.7 seconds in arrears, was a fired-up Malukas.

It took Malukas just eight laps to home in on Pedersen, whom he quickly dispatched before going on to post a series of new fastest race laps. Lundqvist, though, managed his pace to take the checkered flag a comfortable 10.6198 seconds clear as the race was cut short one lap to 29 laps due to the 50-minute time limit. This was Lundqvist’s third win of the season.

Pedersen finished a lonely third, well clear of Italian-Canadian Devlin DeFrancesco (Andretti Steinbrenner Autosport). Kirkwood set the second fastest lap of the race on his way to fifth place, despite an off-course excursion on the final lap, secure in the knowledge that the title already was well within his grasp. Teammate Danial Frost, from Singapore, was the final unlapped runner in sixth. Frost also took home the Tilton Hard Charger Award after having started ninth.

Kirkwood tonight will accept the champion’s trophy at the Road to Indy Championship Celebration awards ceremony before setting his sights on a future in the NTT INDYCAR SERIES.

Kyle Kirkwood (#28 Road to Indy/Cooper Tires/Construction Contractors’ Club-Andretti Autosport Dallara-AER IL-15): “To bring it home today and get this scholarship, it’s such a big relief. It’s been such a stressful season, especially at the end. We really had to push to beat HMD, they’ve been knocking on our door all season long. To get the win yesterday was crucial, and to survive today was crucial, though I have to say today was even harder than yesterday. But this is insane – I can’t thank everyone enough: Cape Motorsports, RP Motorsports, Andretti Autosport. It’s been an incredible four years. I’ve learned so much this year from the Andretti team. They’ve really taught me so much, and I can’t thank them enough. And huge thanks especially to my entire 28 crew, they’ve worked so hard.”

Linus Lundqvist (#26 HPD/Global Racing Group/FX Airguns/Paytrim/JULA-Global Racing Group w/HMD Motorsports Dallara-AER IL-15): “Massive thank you to the entire GRG/HMD team, they put in so much effort this season. It’s been a long time since we won a race and it feels really good to be back here. It’s always tough in these conditions, especially when you have someone like David chasing you. I think we were able to control the situation and look after the tires as the track began to dry – it’s always a balance on how much you want to push and how much you have to save. But I’m super happy to get a win to end the season on a positive note.”

David Malukas (#79 HMD Trucking-HMD Motorsports Dallara-AER IL-15): “I couldn’t get any temp in the tires and I knew it would be a problem going into Turn One. Everyone was spinning and sliding all over the place. But that’s almost like a win, since I made it hard on myself. I decided to just have fun out there, going left, right, everywhere to try and make it happen. I’m really happy, even though we finished second today and in the championship. The team has shown what we can do. I feel as though I’ve matured so much over the past two years, and I’ve enjoyed this season so much. We battled the whole way and it’s been great to share that with this team, so a huge thank you to the team. This has been a year to remember.”

Benjamin Pedersen (#24 DirtFish/Bell Helmets/The Heart of Racing/Colibri Capital-Global Racing Group w/HMD Motorsports Dallara-AER IL-15): “There wasn’t much dry out there! I was just trying to stay really clean. It was tricky, because it was so slippery, so it was a matter of how much you wanted to gamble. We were playing it conservatively, because my goal going in was to stay ahead of Danial (Frost) so I could secure fourth in the championship, which I did. I’m really happy to finish the season this way, to get the team championship and to have the podium swept by the GRG/HMD team. It’s a great way to end the year. I think we met expectations our rookie year, so next year we’ll have different expectations.”