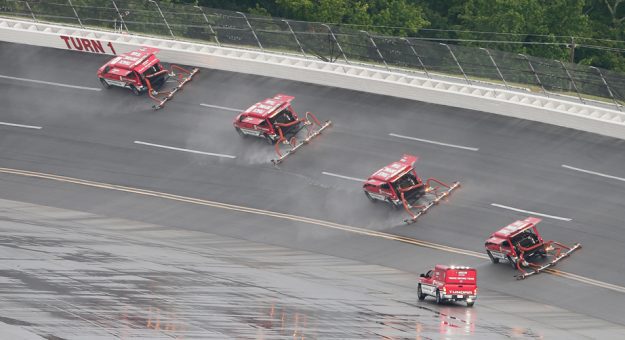 Intermittent and ill-timed rain showers prevented the start of Sunday’s scheduled YellaWood 500 at Talladega Superspeedway and forced postponement of the second Playoff race in the Round of 12 until 1 p.m. ET on Monday (to be broadcast on NBCSN, MRN and SiriusXM NASCAR Radio).

Minutes after the Cup drivers were given the command to start engines and began circling the track on pace laps, a hard rain began falling in the tri-oval at the 2.66-mile speedway and soon drenched the entire track, erasing the progress that had been made in drying the asphalt.

Without hope of completing the race before dark, NASCAR announced the postponement shortly before 4 p.m. ET. Denny Hamlin, winner of this race last year, will lead the field to green on Monday with Joe Gibbs Racing teammate Kyle Busch beside him.

Hamlin already has clinched a spot in the Round of 8 in the Playoff by virtue of his victory last week at Las Vegas Motor Speedway.