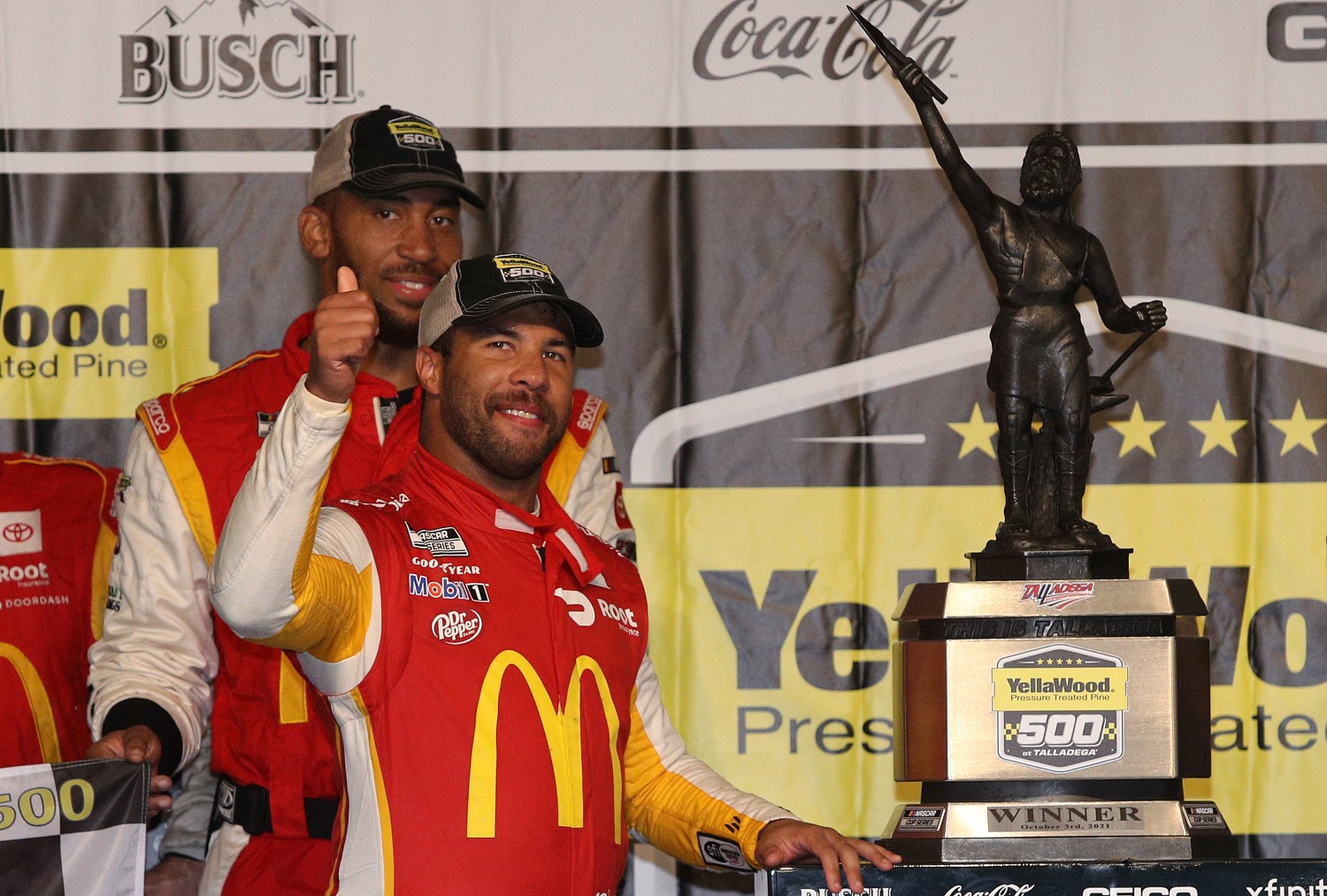 Wallace held the lead in Monday’s rain-delayed YellaWood 500 at Talladega Superspeedway when Ryan Preece turned into the outside wall off the bumper of Chris Buescher’s Ford to cause the fifth caution of the event.

As the cars circled under the yellow, rain drenched the 2.66-mile race track. NASCAR brought the cars to pit road on Lap 118 of a scheduled 188.  After another shower thwarted track-drying attempts, NASCAR called the race and declared Wallace the winner.

Wallace is the first black driver to win a race in NASCAR’s premier series since Wendell Scott took the checkered flag at Speedway Park in Jacksonville, Fla., on Dec. 1, 1963.

It was the first victory for 23XI Racing, a team that debuted this year with driver Denny Hamlin and Basketball Hall of Famer Michael Jordan as co-owners. Drivers outside the respective Playoffs won all three Talladega races in NASCAR’s top three divisions this week. All were first-time winners.

Wallace’s victory came at the same track where the sport came together to support him after the death of George Floyd in Minneapolis and after a noose—later found not to be directed at Wallace—was discovered in his garage stall.

“Man, I’m just so proud of everyone at 23XI,” Wallace said. “New team coming in and getting a win late in the season. I know a lot of history was made today, I believe, which is really cool, but it’s about our guys, about our team, about what was done.

“I appreciate Michael Jordan, I appreciate Denny for believing in me and giving me the opportunity… It’s pretty fitting that it comes here at Talladega.”

Wallace was choked up when asked about the historic significance of his achievement.

“I never think about those things, and when you say it like that, it obviously brings a lot of emotions, a lot of joy to my family, fans, friends… You’ve got to stay true to your path and not let the nonsense get to you and stay strong, stay humble, stay hungry.

“There’ve been plenty of times when I wanted to give up. You surround yourself with the right people, and moments like this that you appreciate.”

Team Penske drivers Brad Keselowski and Joey Logano improved their chances of transferring into the Round of 8 in the Playoff with second- and third-place finishes. Kurt Busch was fourth, followed by Christopher Bell, Chris Buescher, Hamlin and Kevin Harvick.

The wreck that ultimately made a winner of Wallace severely damaged the Playoff hopes of William Byron, whose Chevrolet was collected by the spinning car of Preece. Byron was relegated to 36th in the finishing order and likely will need a victory in Sunday’s Bank of America Roval 400 at Charlotte to advance to the Round of 8.

“He (Preece) was just coming down the track, and I was kind of trying to run a third lane,” Byron said of the wreck. “Just part of Talladega. We’ll go to the Roval, try to win that one and advance that way.”

Byron was the last of three Hendrick Motorsports drivers to get swept up in an accident. Kyle Larson was the first. By the time the first sudden rain shower of the day darkened the asphalt in Turns 1 and 2 and forced a stoppage on Lap 74, Larson’s fortunes already had taken a turn for the worse.

A strong push from Byron’s Chevrolet turned Justin Allgaier’s Camaro sideways as the cars thundered through the tri-oval on Lap 56. Allgaier shot up the track into Larson’s Hendrick Motorsports Chevrolet, severely damaging the front suspension and the sheet metal on the driver’s side of the car.

Larson was able to make minimum speed after a restart on Lap 65. The caution for the five-car wreck that crippled Larson’s car also encompassed the end of Stage 1, won by non-Playoff driver Chris Buescher.

On Lap 67, Larson shredded his right front tire, which was cocked at an angle toward the outside wall when he resumed racing. He lost three laps on pit road and fell to 39th in the running order as his crew made frantic repairs.

Attrition elevated Larson to 37th at the finish, but he lost the security he had as a six-time winner in the series this year. The regular-season champion leaves Talladega second in the standings but just 22 points above the current cutoff for the Round of 8.

A multicar chain-reaction wreck after the resumption of the action brought an early end to Alex Bowman’s afternoon. On Lap 98, Chase Elliott pushed the Chevrolet of Ricky Stenhouse Jr. into the rear bumper of Bowman’s Chevy, turning the No. 48 Camaro into the outside wall and out of the race.

“The 9 (Elliott) just shoved me one last time there, and it got the 48 loose,” Stenhouse radioed to his team.

Bowman was fighting for the race lead when he was turned by the contact from Stenhouse’s car.

“Yeah, just dumped over on the left rear and turned us around really bad,” Bowman said. “Bummer for the Ally 48 team. We had a fast car; we were leading there. That’s just superspeedway racing and the box that we’re put in by these racetracks. You’ll have that. Bummed to have torn up race car, but we’ll move on and try to go win the Roval.”

Kyle Busch was another victim of the Lap 98 wreck, but the two-time Cup champion remains nine points above the current cut line—tied with defending champion Chase Elliott—heading to the Round of 12 elimination race on Sunday at the Charlotte Roval.

Harvick is nine points below the cutoff, with Bell 28 points in arrears and Byron and Bowman 44 and 52 points on the outside, respectively.

What emotions were going through your mind waiting for a decision from NASCAR?

“Part of me is just sitting there waiting – it’s not over with. Just sit there and bide our time and if we go back racing, let’s put ourselves in position. So many cool fans behind us at the pit box just cheering for it to rain so that kind of amped up the intensity a little bit. Just so proud of everyone at 23XI Racing. New team and coming in here getting a win late in the season reminds me of 2013. Waited so long to get that first truck win. I know a lot of history was made today, which is really cool, but it’s about my guys and it’s about our team and about what we’ve done. Appreciate Michael Jordan, appreciate Denny (Hamlin) for giving me an opportunity and believing in me. Like we talked, it’s pretty fitting that it comes here at Talladega.”

What does it mean to be only the second African American driver and first since Wendell Scott to get to victory lane in the NASCAR Cup Series?

“I never think about those things, but when you say it like that, it obviously brings a lot of emotion on and joy to my family, fans, friends. It’s pretty damn cool. Just proud to be a winner in the Cup Series.”

What does it mean to have your first Cup win come at Talladega?

“This is for all those kids out there that want to have an opportunity at whatever they want to achieve and be the best at what they want to do. You’re going to go through a lot of bullshit, but you always have to stay true to your path and not let the nonsense get to you. Stay strong, stay humble, stay hungry. There have been plenty of times that I wanted to give up, but you surround yourselves with the right people and it’s moments like this that you appreciate.”

“It’s really cool and humbling. I’ve gone through a lot of stuff as every athlete would. I’ve thought about this moment a lot and it’s not your traditional burnout and celebration in victory lane, which is unfortunate. This was the same feeling I had going into Martinsville 2013. Just prepared more than ever and I didn’t even do anything different. Just something clicked. I was like, I want to be more aggressive and make sure that we’re there at the end. Didn’t know the end would be the rain, but just had to be there. I had a good feeling about it. Thanks to everybody at 23XI Racing, Toyota, McDonalds, DoorDash, Root, Dr. Pepper. I didn’t dream about being here when I was a kid, but this is kind of a dream come true.”

What does it mean to have so many people believe in you along this journey?

“It means so much. I’m just very appreciative of the opportunity to be where I’m at. I have my Mom on the phone right now and I’m ready to hear her voice. It’s the thing you never give up on. My Mom and my parents have always pushed me to be the best that I can be and do the best that I can and whatever happens, happens. We’re here in victory lane at Talladega.

What does it mean to make history here today?

“Words can’t describe it. I never really paid too much attention to it because I didn’t want that to be the winning focus and I just want to go out and drive and be a driver and compete with all my competitors out here. This is what happens when we can focus on just going out and competing and being a driver.”

One thought on “NASCAR: Rain hands victory to Bubba Wallace at Talladega”