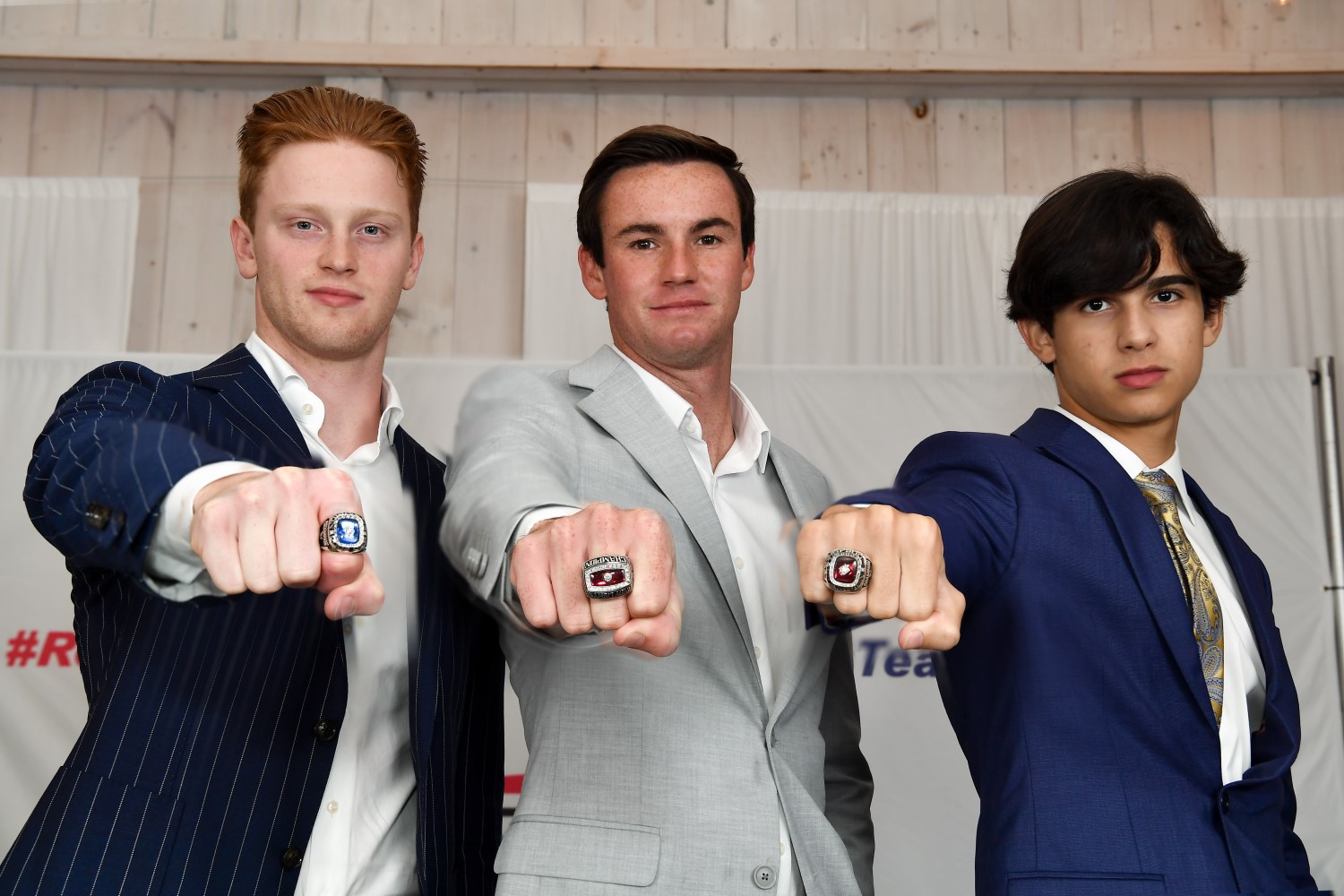 Hours after the conclusion of another spectacular season of competition in the Road to Indy Presented by Cooper Tires yesterday at the Mid-Ohio Sports Car Course, over 300 drivers, team members, officials, sponsors, partners and guests congregated at The Legacy on Possum Run in Bellville, Ohio for a Championship Celebration. In all, more than $3.1 million was distributed – the bulk of it to a selection of talented young drivers who are steadily progressing along the unique three-rung open-wheel racing ladder with a singular goal of competing in the NTT INDYCAR SERIES and the Indianapolis 500.

Fittingly, all three championship titles were decided during the VP Racing Fuels Championship Weekend Presented by Cooper Tires, which comprised a total of six races on the challenging 2.258-mile Mid-Ohio track situated midway between Columbus and Cleveland.

Kiko Porto, 18, from Recife, Brazil, was the first to clinch, with a third-place finish for DEForce Racing in Saturday’s penultimate round of the first step on the ladder, the Cooper Tires USF2000 Championship. Porto will receive a scholarship package valued at $406,305 to ensure graduation to the next step on the ladder, the Indy Pro 2000 Championship Presented by Cooper Tires, in 2022.

Christian Rasmussen, 21, from Copenhagen, Denmark, needed merely to start yesterday’s Indy Pro 2000 finale to be assured of his second championship title in as many years for the Jay Howard Driver Development team after winning the USF2000 crown in 2020. He did rather better than that, rising from the back of the grid to score a last-gasp podium finish. Rasmussen earned a package valued at $723,065 which will guarantee his progression to the top step of the ladder, Indy Lights Presented by Cooper Tires, next season.

Similarly, Andretti Autosport’s Kyle Kirkwood, 22, from Jupiter, Fla., needed merely to avoid a last-place finish in order to secure the Indy Lights crown and a scholarship valued at over $1.3 million which will fund a minimum of three races in the 2022 NTT INDYCAR SERIES, including the 106th Indianapolis 500. He survived a few scares along the way during a wet race but ultimately accomplished his goal with a fifth-place result.

Kirkwood became the first driver to win scholarships on all three levels, having accumulated an astonishing 31 wins from a total of 50 starts since making his USF2000 debut in 2018.

Other notable awards included one-day Indy car tests for each of the top three Indy Lights drivers. David Malukas (HMD Motorsports), from Chicago, Ill., and Linus Lundqvist (Global Racing Group with HMD Motorsports), 22, from Stockholm, Sweden, will join Kirkwood in gaining their first official taste of an NTT INDYCAR SERIES car just prior to the annual Chris Griffis Memorial Road to Indy Test at the Indianapolis Grand Prix circuit in Speedway, Ind., at the end of this month.

Dan Andersen, Owner and CEO of Andersen Promotions: “Once again, the season presented extraordinary challenges for the entire Road to Indy, and I am very appreciative of the way the teams, the drivers, the racetracks and the entire Andersen Promotions staff stepped up to put together a complete season. Each series conducted a full schedule, with every one of those races providing their own excitement, with many twists and turns on the way to the final championship results. Kiko Porto, Christian Rasmussen and Kyle Kirkwood represent the future of motorsports and we look forward to following their achievements as they move up the ladder, with the opportunity to join drivers like Colton Herta and Pato O’Ward who have earned success in the NTT INDYCAR SERIES. This evening highlighted so many fantastic achievements by the talented young drivers who make up our fields, and we are very proud to be a part of their ongoing careers in motorsports. And of course, we couldn’t do this without our partner, Cooper Tire. Congratulations to all of tonight’s winners and to the entire Road to Indy. We look forward to 2022.”

Kyle Kirkwood Indy Lights Presented by Cooper Tires Champion: “This is pretty insane, to think of all of this as a whole. So many people that are here tonight I’ve raced with my entire life: Cape, Abel, RP Motorsports – even though they unfortunately aren’t here this weekend – and Andretti. They’ve been my family all the way through and it’s really cool to see where my career has gone these past four years, with three championship seasons. I’ll cherish these times; this is an important milestone in my career and I hope it takes me somewhere.

“Since I was a child, INDYCAR has been my goal. I’ve seen so many people I’ve grown up with make it, drivers like Pato (O’Ward), Colton (Herta) and Oliver (Askew), and I’ve always been on a trend right behind them. To be able to make it, to match up with those guys, to beat records on the Road to Indy set by drivers that I would never expect to challenge, is incredible. It’s all just now sinking in.”

Christian Rasmussen winner of the Indy Pro 2000 Championship Presented by Cooper Tires: “To be honest, it really hasn’t sunk in yet. It still feels so surrealistic to think about what we’ve accomplished this year. It’s been a great year with Jay Howard Driver Development, both of us in our rookie season in the series. We knew it would be difficult, given how competitive the series is and with so many good teams and drivers, for us to come in and win. To overcome that, to be quick right out of the gate, was so important. It gave me so much motivation for the rest of the season, knowing that we were quick. It means everything to me to win the scholarship – I wouldn’t have been able to race this year without the USF2000 scholarship so I’m happy to carry on that legacy, to be one of the drivers to carry that moniker. For my career, the scholarship is absolutely crucial to help me continue on the Road to Indy. Knowing I have a seat guaranteed in Indy Lights next year is incredible and I can’t wait to get started.”

Kiko Porto, winner of the Cooper Tires USF2000 Championship: “The DEForce team and I worked so hard this year and gave a 100 percent commitment from the start of the season. We had some tough breaks early in the year but we kept pushing. I’m so happy how fast we went all year, going better and better all season. This is an incredible moment for me and for the team, and for everyone who helps me be here. 2022 starts now, we need to start as fast as we can so we can begin the season strong. This scholarship gives me the opportunity to continue my career, it’s an incredible opportunity. I hope to represent the Road to Indy the best I can – thank you to everyone for making this possible. Everyone on the grid wants this opportunity and I am so grateful.”