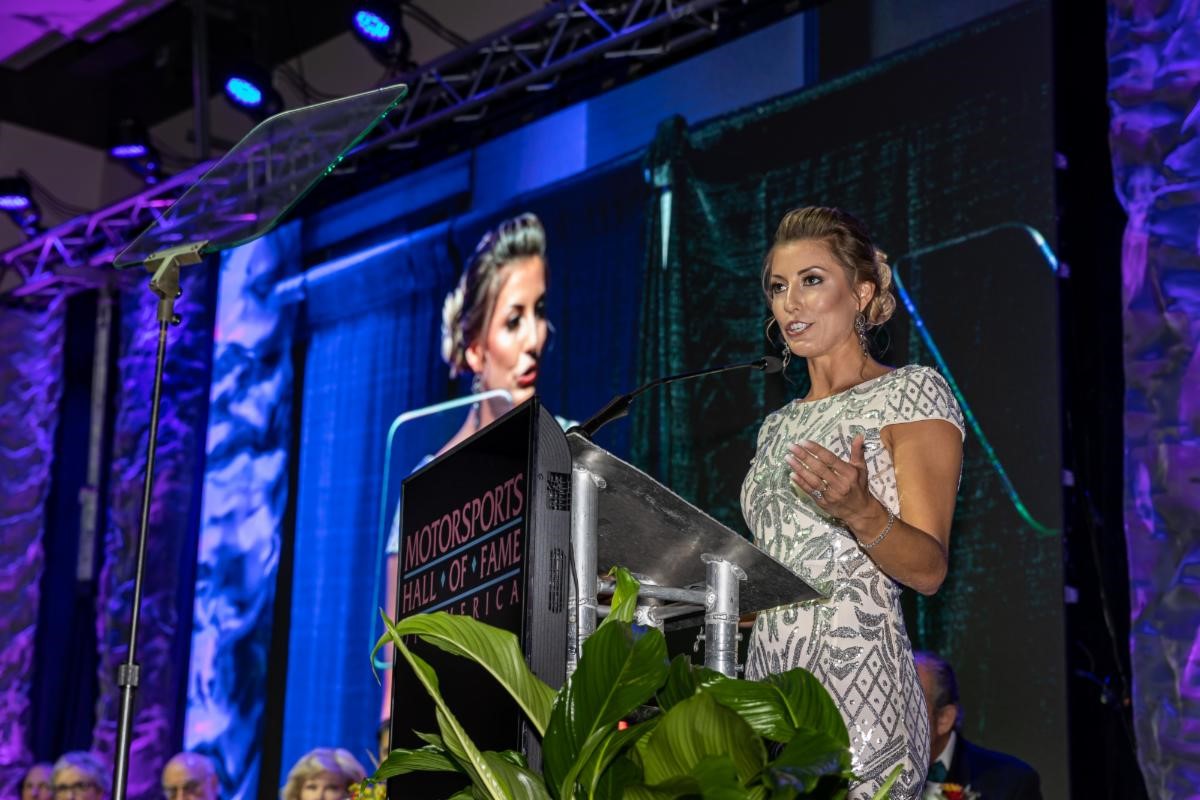 The Motorsports Hall of Fame of America (MSHFA) pulled off an unprecedented three days of racing celebrations last week, including the 32nd and 33rd Annual MSHFA Induction Ceremonies Presented by Firestone in the new M1 Concourse Event Center in Pontiac, Michigan. All events were attended by a galaxy of racing stars.

This mega-celebration of speed was scheduled after the pandemic forced postponement of the 2020 and 2021 class inductions. It was the first dual induction celebration in the 33-year history of the MSHFA.

The Class of 2020 was inducted on Monday, September 27, while the Class of 2021 held its celebration on Wednesday, September 29. To top it all off, on Tuesday, September 28, sandwiched between the back-to-back inductions, the MSHFA held a historic doubleheader – the Inductee Heritage Brunch followed by an epic Heroes of Horsepower event at The Henry Ford Museum. Racing legends from both the 2020 and ’21 classes and a star-studded list of previous MSHFA inductees attended.

Top Fuel drag racer Leah Pruett, who brought along her fiancé Tony Stewart (MSHFA Class of 2019), was the honorary chair for the Class of 2021 and summed up MSHFA’s return to the Midwest.

“It’s great to be in Michigan,” Pruett said. “Michigan serves as a bit of homecoming for the Motorsports Hall of Fame of America. While the Hall now calls Daytona home since 2016, it was here in Novi, Michigan where the (MSHFA) spent its first three decades. So, it’s fitting that we are back here in Michigan, and more so, that we are back here together feeling like great, old times.” 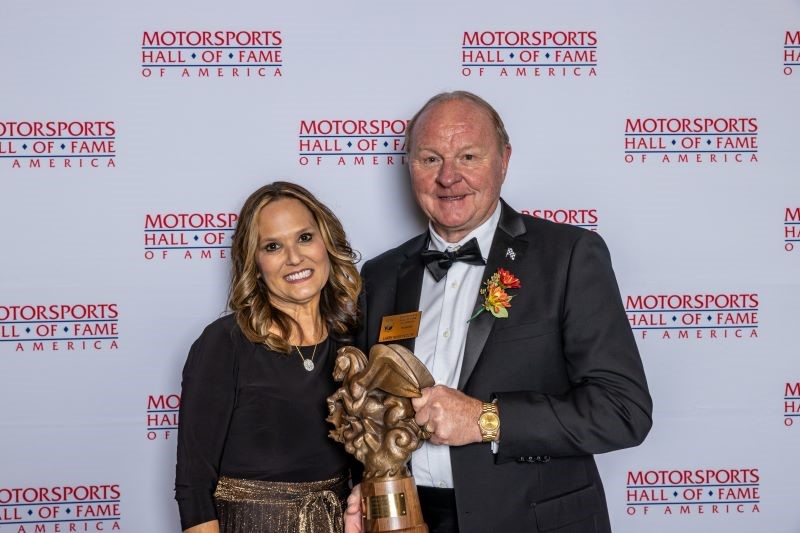 The Class of 2022 induction celebration will return to Daytona Beach on March 7 – 8, 2022. The first eight members of the class were announced at Indianapolis Motor Speedway on August 13. The final Class of 2022 inductee will be announced in a special livestream event from the Harley-Davidson Museum® in Milwaukee at 6:30 p.m. EDT this Thursday, October 7. Harley-Davidson legend Willie G. Davidson and other family members are expected to participate. The livestream will be available on the MSHFA Facebook page at https://www.facebook.com/MotorsportsHOF.

After a rousing Class of 2020 ceremony Monday, the MSHFA reloaded with another set of motorsports icons on Wednesday night. The MSHFA Class of 2021 included one of NASCAR’s 50 Greatest Drivers, Davey Allison (Stock Cars), who was presented by his crew chief and current NASCAR television analyst Larry McReynolds, while his widow Liz Allison Hackett had an emotional acceptance speech.

“It’s rare you get to work alongside your best friend,” McReynolds said. “I was fortunate enough to work with mine for two and a half years; not only working together but winning a number of races. He gave 100 percent in that race car no matter if it was practice, qualifying or the race,” later adding, “There’s not a day goes by that I don’t think about Davey in some capacity.”

Hackett said her husband would have been humbled by the induction and made a point of thanking those who worked on her husband’s race cars throughout his career.

“To hear all these beautiful stories about all these amazing people, I think he would be so touched,” she said. “He would be thinking ‘What in the world am I doing sitting at this table?’ He would not believe he was voted into this amazing Motorsports Hall of Fame of America. He would be shocked. He was just a good ol’ Alabama boy that loved racing.” 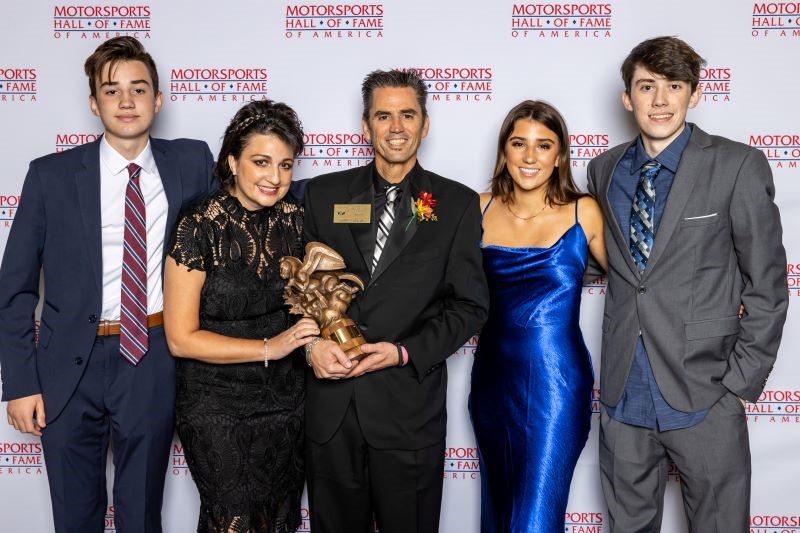 The induction really touched Dixon, who enjoys all forms of racing. Dixon was particularly fond of Hayden. Roger Hayden recreated his brother’s MotoGP championship lap – American flag in hand – before the Class of 2021 ceremony started.

“I’m going to congratulate everybody else that’s getting in (the MSHFA) and I know some of them,” Dixon said. “Nicky Hayden – I was such a fan of him, (Roger) doing that lap, holding the flag. I was proud to be an American. I wish he was here. I’m an organ donor because of Davey Allison. He’s still doing great things for people. I’m proud to be in this class.”

Racing journalist Gordon Kirby presented Miller. He described his media friend as “a unique character and reporter who will never be replaced or duplicated. He was a fearless pursuer of the truth.” 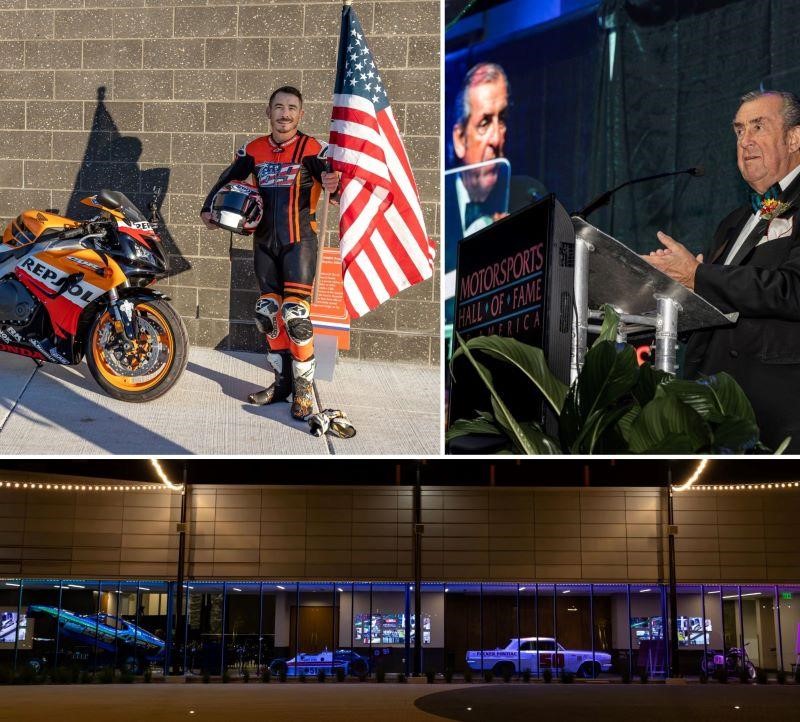 Michael Certa, Nichels’ nephew, accepted for his famous car-building uncle. Certa worked for the race team’s parts and engine departments for a time. “I was a tiny, tiny, tiny cog in Nichels Engineering’s success,” he said, quipping, “The best thing I did is that I probably didn’t do anything that held them back.”

Heroes of Horsepower presented by Ford Performance special guest Edsel B. Ford II welcomed the celebrity-filled gathering to the event that brought together an amazing assemblage of motorsports royalty. This is the first time ever that inductees and presenters from two different classes attended the same Heroes of Horsepower event.

In addition to plaque unveilings and a strolling dinner, guests received an exclusive tour of the acclaimed new Driven to Win: Racing in America exhibit Presented by General Motors. 2020 inductee “Ohio George” Montgomery signed autographs in front of his ’33 Willys “Malco Gasser.”

A longstanding tradition of each year’s MSHFA induction celebration, the Heroes of Horsepower event is a high-end but more casual gathering of motorsports royalty than the accompanying black-tie induction ceremonies.

Attendees mingle and meet-and-greet each year’s induction class while enjoying the finest food and beverages in the middle of a major motorsports attraction. A highlight of the evening is the unveiling of each inductee’s bronze plaque that will be displayed permanently at the MSHFA Museum in Daytona Beach. 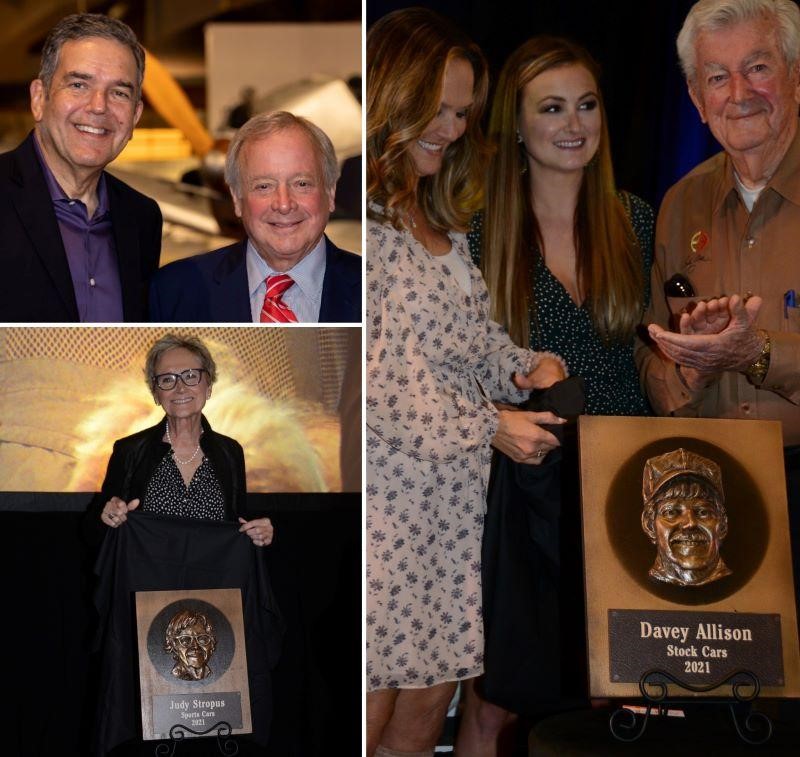 The MSHFA moved to Daytona International Speedway (DIS) five years ago from Novi, Mich. The Hall is housed in the Speedway’s Ticket and Tours Building located in front of the famed 2.5-mile DIS tri-oval and greets more than 100,000 guests each year.