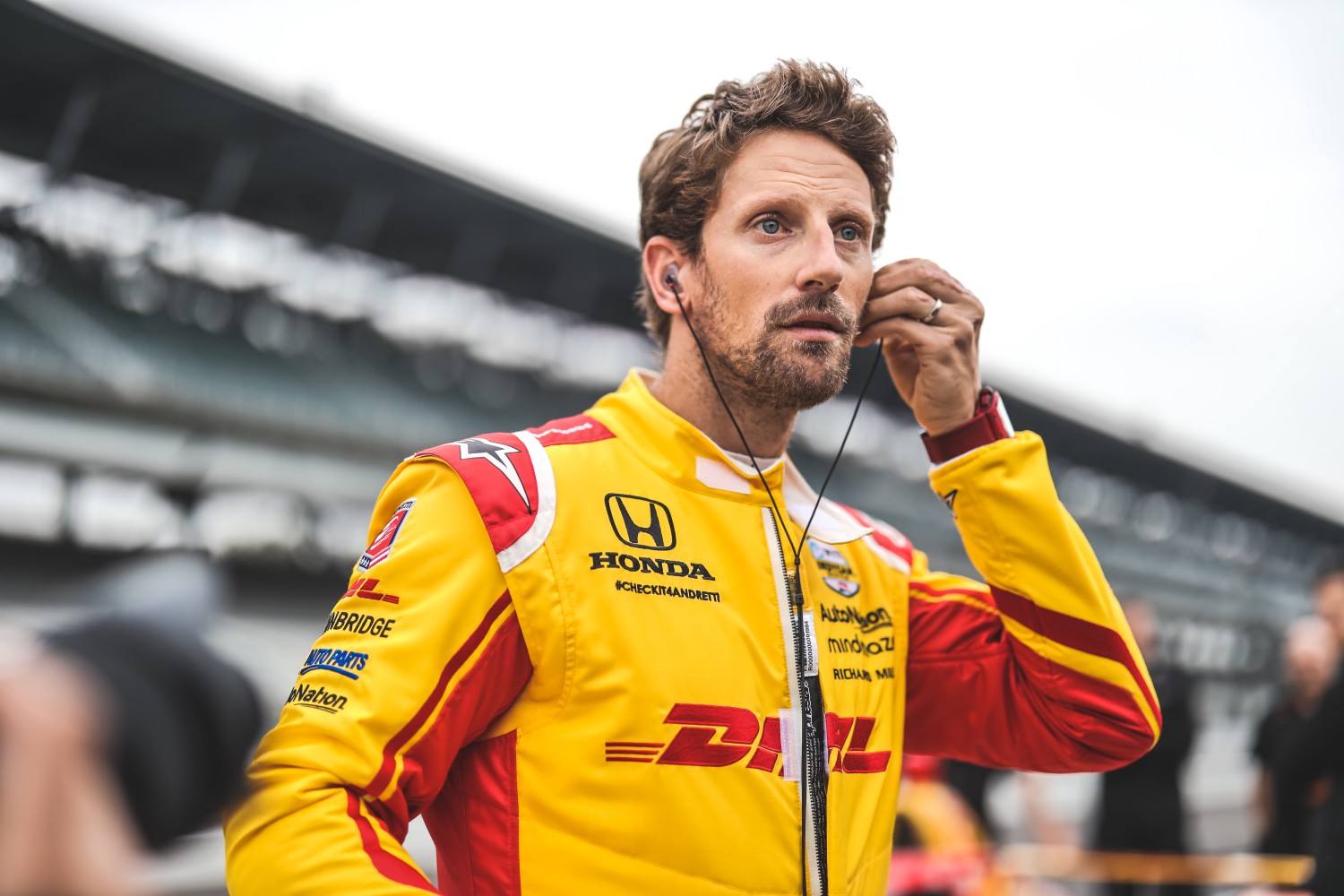 He said he went through a mental checklist, reminding himself of the lowered expectations of a first-timer working to complete the required three-stage Rookie Orientation Program for the Indianapolis 500.

“Be smart and ease into things,” he told himself.

Then the helmet went on, Chip Ganassi Racing’s crew fired the Honda engine, and away Johnson and his patient plan went. A couple of laps following the standard installation lap, the winner of 83 Cup races and four Brickyard 400s had the gas pedal flat in Turns 2 and 4, and soon thereafter he was similarly at full speed in Turn 3.

So much for “easing” into his first laps.

“A lap in you forget about (the plan),” Johnson said later. “You’re in tune with the car, worrying about speed, just kind of into that racing/driver experience that you’re used to.”

Johnson and fellow 2021 NTT INDYCAR SERIES rookie Romain Grosjean both participated in the test Wednesday at IMS, which was interrupted and finally cut short by rain.

INDYCAR officials deemed both drivers passed their rookie tests even though both were a few laps short of completing the final phase when a downpour ended track activity around 4:15 p.m. (ET). Both will finish their remaining laps the next time they are on the IMS oval, which for Grosjean will be the IMS Open Test on April 20-21, 2022. Johnson still has not committed to running in “The Greatest Spectacle in Racing” next year but could join Grosjean at the Open Test if he commits to the “500.”

NASCAR legend Johnson competed at IMS 18 times between 2002 and 2019 in a stock car, so he had some idea of what to expect from his first experience on the IMS oval in an INDYCAR SERIES car. Still, there were differences, particularly as the car traveled 25 mph faster than Johnson ever has gone here, with another 20 mph to come if he returns next May for the 106th Indianapolis 500 presented by Gainbridge.

Johnson said the car felt significantly lighter than a Cup car – it is by about 1,700 pounds – and certainly is more nimble. Not having power steering was different, too.

Indy’s rookie program is a series of segments at controlled speeds to emphasize consistency. The first segment is 10 laps at speeds of 205 mph to 210 mph. The second segment is 15 laps between 210-215 mph, and the final segment is 15 laps at or faster than 215 mph. Johnson and Grosjean completed the first two phases and more than half of the third before rain arrived.

“The only thing that’s similar is the fear,” said Johnson, who drove the No. 48 Carvana Honda. “I don’t think it matters what car you’re in, (Turn 1 at IMS) looks like a tighter radius. It looks more challenging than anything else.

“Romain and I were talking about how they’re all supposed to be equal turns, but Turn 1 visually is different, and I think it is (different) the way the banking is.”

Grosjean was driving Andretti Autosport’s No. 28 DHL Honda for the first time after spending his first INDYCAR season with Dale Coyne Racing with RWR, predominantly on the road courses except for one oval start in August at World Wide Technology Raceway. Despite living in his motorhome in the IMS infield most of the season, Grosjean had only seen a two-seater go around the oval track prior to Wednesday.

“The emotions of ovals, for me, is very new even though I made a (oval) race,” he said. “I just feel like it’s not something that is particularly comfortable. It’s not like road courses or a street course, where I know what to do and I know how to progress.

“Here, I have to learn everything.”

Johnson is 46, Grosjean 35, but neither minded the “rookie” tag they are still operating with. In recent weeks, Johnson joked about the controlled environment of the program – his team even posted a social media video spoof about it — but he praised it Wednesday.

“I think it’s a nice way (to get familiar) without the pressure, without worrying about throwing a lap time up and just kind of work through it,” he said. “It’s way different, but I can I tell I’m not even at the limit of the car.”

Grosjean had Andretti Autosport owner Michael Andretti, a 16-time Indianapolis 500 starter, along with 2016 pole winner James Hinchcliffe on site. Andretti’s advice was similar to what he told NASCAR champion Kurt Busch in 2014 and two-time F1 champion Fernando Alonso in 2017:

“Take your time, trust your butt and respect the place,” Andretti said. “If you lose respect for this place …”

“It’s funny,” Grosjean said. “I wasn’t that fast, but the lap was still 200 mph, which is fast, but it doesn’t feel like it. It feels smooth, and it flows. You can imagine during the race how can I plan (a pass), how can I get the momentum going.

“Qualifying? Yes, for sure it must be … pretty something.”

“(They’re) not short on opinions and advice,” he said, laughing, “so we’ll take it. (I’m) thankful that they’re here and care.”

The official schedule for “500” action in May has not been finalized, but qualifications will be May 21-22 with the 200-lap race May 29

Both Jimmie Johnson and Romain Grosjean are working their way through their ROP test here at the Indianapolis Motor Speedway.

They’ve completed the first 2 phases. Only one more to go.