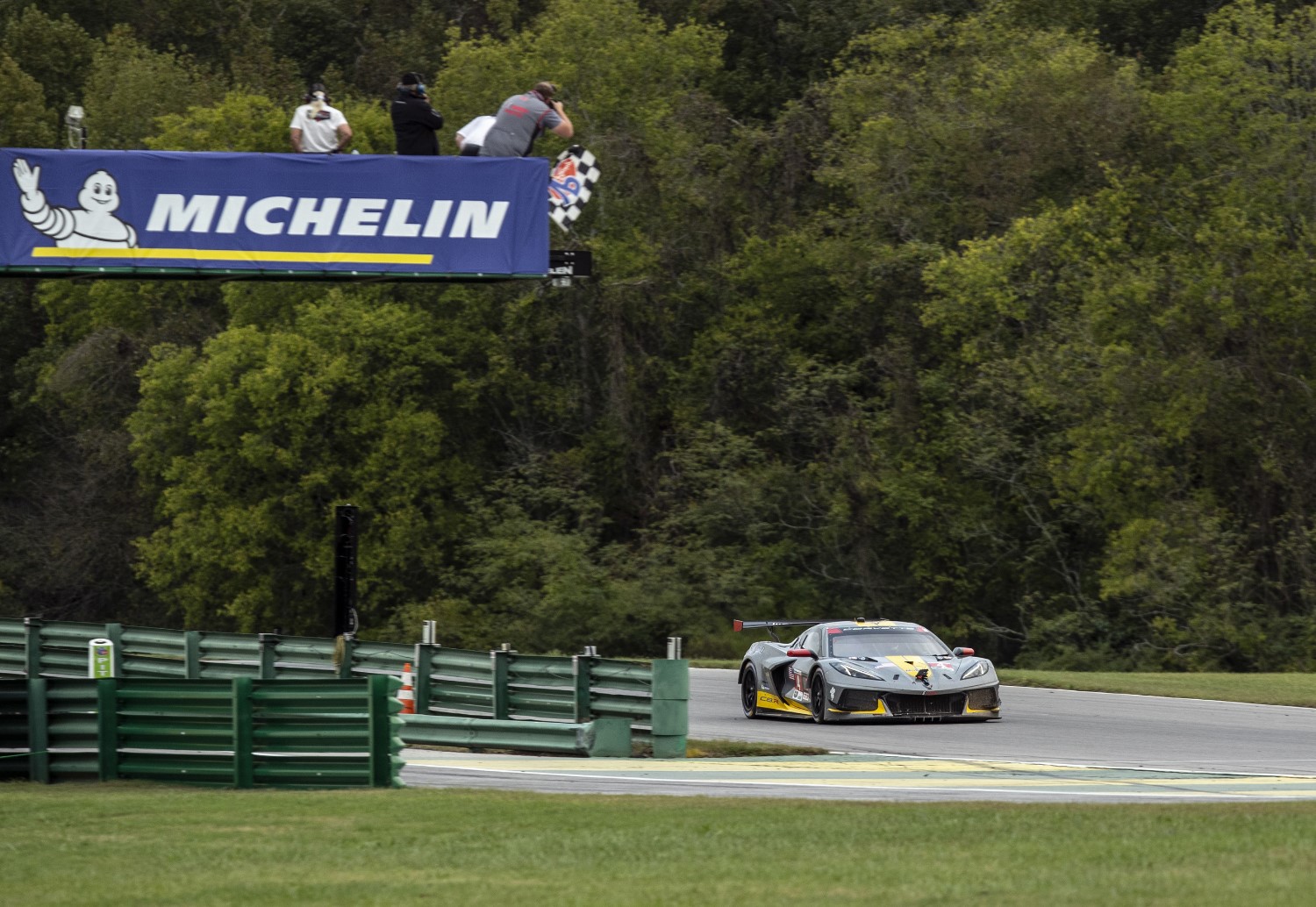 Corvette Racing’s Nick Tandy and Tommy Milner took their third straight victory in the IMSA WeatherTech SportsCar Championship by winning the Michelin GT Challenge at VIR on Saturday as the late-season roll continues for the No. 4 Mobil 1/SiriusXM Chevrolet Corvette C8.R.

Tandy went from third to first in the span of a contact-filled, half-lap with 50 minutes to go for the winning move. Saturday’s victory goes along with the triumphs at Laguna Seca and Long Beach for the No. 4 Corvette C8.R.

Antonio Garcia and Jordan Taylor, leaders in the GT Le Mans (GTLM) Drivers Championship, finished second in the No. 3 Mobil 1/SiriusXM Corvette. They only need to start the 10-hour Petit Le Mans at Michelin Raceway Road Atlanta to wrap up their second straight title and another Manufacturers Championship for Chevrolet.

Saturday’s race was full of momentum changes and strategies – all on NBC’s national television audience. Taylor led from the start, overtaking pole-sitter Milner into the first corner. The two Corvettes stretched out their lead over third-place Cooper MacNeil to around 35 seconds before Milner made the first Corvette pit stop 28 minutes into the race for fuel, Michelin tires and a driver change to Tandy. That came in response to a full-service stop for the No. 79 10 minutes earlier, and the combo of the No. 4 Corvette’s pace and a quick stop meant Tandy was clear in second place by 40 seconds.

The No. 4 Corvette inherited the lead on a slow stop for the No. 3 C8.R team 53 minutes into the race. Taylor led by more than a minute, but the pit stop misstep relegated Garcia to second but still clear of Kevin Estre in the No. 79.

The race’s lone full-course caution came near the halfway point and shifted the strategy fortunes. Tandy stopped for fuel and tires, the earlier stop allowing the No. 4 team to perform a tire change while refueling the Corvette. Garcia got tires only after barely 20 minutes of green flag running.

The restart with 66 minutes left saw the three GTLM contenders in a line. Estre shoved Tandy out of the way for second place with about 50 minutes left and did the same to Garcia – still on older tires – shortly thereafter. The battle between the No. 3 Corvette and the 79 allowed Tandy to catch back up to the lead pair. He got by Garcia during the 3 vs. 79 fight and stuffed the No. 4 Corvette to the inside at Turn 12 leading on to the backstretch to take the lead.

TOMMY MILNER, NO. 4 MOBIL 1/SiriusXM CHEVROLET CORVETTE C8.R – GTLM RACE WINNER: “What a great win. I got a pretty poor start and was in the wrong engine mode. That was my fault and that let Jordan get pretty far up alongside me. With the conditions as they were, I just went a little bit wide in Turn One and that was the spot gone. From there it was just about trying to get back up to him and saving as much fuel as I could. When the Porsche came in so early there, the plan for us was to try to cover them on strategy in case a yellow came out. Today we definitely needed a bit of luck and got that. We also had this guy next to me (Nick Tandy) in the car at the end. He did an absolutely incredible job. He got raced really hard and raced back pretty hard for a pretty good show! I’m super happy for our whole team – another win for the 4 Corvette. It’s another 1-2 for Corvette Racing. It definitely didn’t look like was going to go that way for us, but a lot of hard work, good racing and here we are 1-2 again. It feels great, feels good for the team and I’m happy to get one of these Michelin Man trophies.”

EMOTION BEHIND THE WIN AND WINNING THREE IN A ROW: “Nick and I were talking after Lime Rock. We felt like we had a car that was fast and a crew that was having good pit stops. We were just missing the last little piece. Sometimes it’s luck and sometimes it’s the little mistakes that we all make. I will say that for the whole year the team has been really good on our side. We had a super-fast car at Daytona. Sebring and other things didn’t go our way. It was frustrating for us and frustrating for our crew guys. It was a time for everyone on our side to buckle down and get every last little detail just right so we get these wins. I’m a firm believer of making your own luck. From our side, we made another conscious effort to make sure we were doing everything we could possibly could to get the result. We had the speed and all the ingredients to get these wins; it just wasn’t getting put together. When you make that extra effort and get the results, it’s one of those things that encourages that same intensity, same drive and same passion that got us three wins. Today was about making sure we continued down that path. To be honest, we got a little bit lucky today. My start was pretty poor and by trying to cover the Porsche on their pit strategy, that put us in a bad spot if the race had gone green the whole way. Obviously it didn’t but were still behind the eight-ball a little bit by having to cover them. Today we had the luck plus the right guy in the car at the right time. It’s worked for us. We’re making our own luck but also working super hard for it.”

NICK TANDY, NO. 4 MOBIL 1/SiriusXM CHEVROLET CORVETTE C8.R – GTLM RACE WINNER: “I’ve got to give full credit to Corvette Racing, Chevrolet and the guys and girls on this team. It started with Tommy putting it on pole and Jordan again on the front row for Corvette Racing. From the start, we split strategies and nailed all the stops on the strategy from there. The car was bullet-proof. Hats off to everyone on the team.”

FIGHT FOR THE WIN: “It was an interesting one. There was about an hour-and-15 minutes to go with the three GTLM cars in a line. I especially know how fast that RSR should be around this circuit because I sat in it last year. If there’s a circuit you want to take that car to, it’s this place. With the change in the BoP from last year, we knew they could have walked away with this race. Kevin (Estre) is a good friend of mine. I respect him a lot and he’s a great driver. When you start smashing into cars in front of you when you have no real room or right to put your car where he did… I think what happened was karma or what-not. It was a good race but it’s always great to win the races when you really shouldn’t. It was fun out there. I always enjoy a good fight. When you race people like Kevin, Antonio (Garcia), Tommy and Jordan (Taylor), there’s always going to be a good fight. We enjoyed it, and we got the better of it. I’m really glad the Corvette was up to the job and kept the wheels on it.”

CONCERNED ABOUT A PUNCTURE FROM TURN FOUR CONTACT? “Yes. The first real contact was a big hit on the wheel. I checked the steering but it was straight. You never know if you’re going to get a puncture or knock off the splitter. I saw where we lost some aero parts at the front. You never really know so you just hope. But what I do know is how strong are these Corvette Racing C8.Rs – from experience in the past! It was nerve-wracking but that is IMSA GTLM racing.”

RANKING BATTLES? “Personally, it was probably one of the best because we had such a performance deficit. The Porsche couldn’t stretch its legs because it was stuck behind the Corvettes. We just managed to keep him there. We’ve said before that it only takes two cars to make a good race. So when you have three out there at the front fighting for the overall win… for us it makes no difference whether we’re fighting for second or third in a class with eight cars in the class or whether it’s the Corvette and Corvette in the third-fastest class. I hope the interest in this race and the interest in GT racing around this weekend made it a good show.”