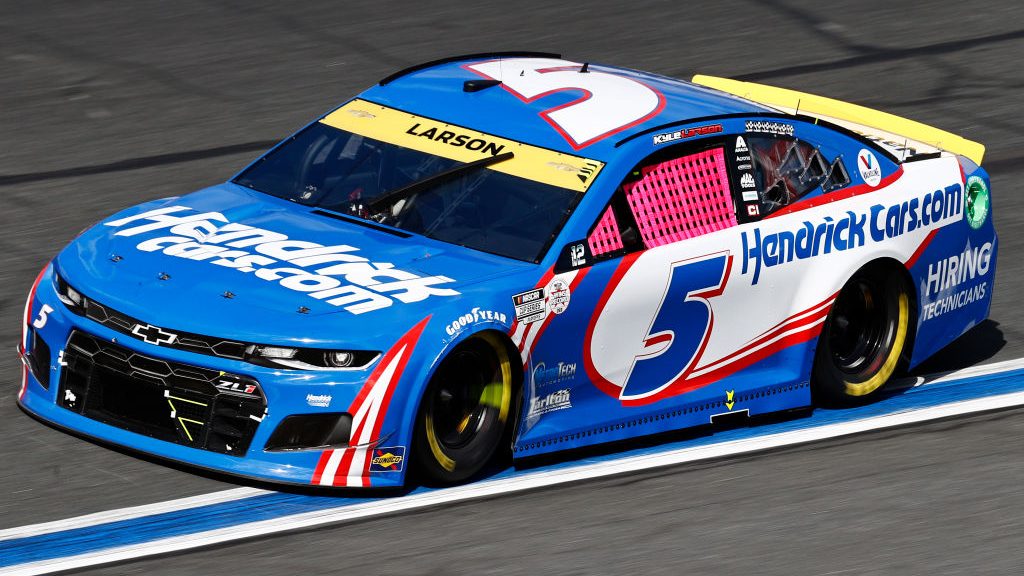 Dirt tracks, short ovals, superspeedways and road courses, he dominates on all of them. Kyle Larson proved he is the best American driver of this era by winning the Bank Of America Roval 400 NASCAR Cup race Sunday – his 7th win of the year, and his 3rd road course win of the year.

Larson got set to the back of the field with a failed alternator and battery that had to be changed on pit road. Larson came from the back, drove through the field and schooled every single driver in the NASCAR Cup grid, much to the chagrin of the ‘Libtard Cancel Culture’ who tried to ruin his career.

And Larson’s victory was no stress-free Sunday drive. Car chief Jesse Saunders and hauler driver Steven Legendre changed the battery and alternator belt on Larson’s No. 5 Hendrick Motorsports Chevrolet under caution and kept him on the lead lap at the end of Stage 2, after the voltage dropped and put Larson in danger of elimination from the Playoff.

“It wasn’t looking too good,” Larson said of the electrical problems that beset his car. “Thankfully, everybody on our 5 car did a great job of staying calm. (Crew chief) Cliff (Daniels), as always, did a great job of communicating with me what was going on, getting the battery changed, the alternator—whatever was going on to get our battery running.

“I knew I was going to have some sketchy moments. I had to work my way through traffic, stay calm, and we had some good restarts there at the end… It was just a fun race there and a lot of craziness all day long.”

The victory was Larson’s first at the Charlotte Road Course and the 13th of his career.

Larson made the winning pass on the final restart with 9 laps to go.  He dusted leader Denny Hamlin in the #11 JGR Toyota two corners after the green flag flew and never looked back to lead the rest of the way.

Larson has more wins this season than his entire NASCAR Cup Series career before 2021 when he was held back by inferior cars.

Seven Cup Series wins and three of them on road courses in addition to his Knoxville Nationals and Kings Royal victories in a Sprint Car.

Dirt Late Model wins — including in the World of Outlaws.

25 wins in 78 total starts this season for Kyle Larson.

Tyler Reddick finished second 1.8s behind the #5  Hendrick Chevy to take second while Chris Buescher was the top finishing Ford in third, almost 10 seconds back.

Kyle Busch and Denny Hamlin rounded out the top-5.

The Bank of America Roval 400 doubled as the cutoff race for the Round of 12. Though he was already well above the elimination line, Larson’s victory solidified his spot in the Round of 8. Hamlin, Logano, Brad Keselowski (finished 20th), Martin Truex Jr. (29th), Blaney, Chase Elliott (12th) and Busch complete the Round of 8 field with Larson.

Elliott won Stage 1 on Lap 25, notching his fourth stage win of the season. There were six other playoff drivers — Blaney, Truex, Logano, Busch, Byron and Harvick — within the top 10 to earn stage points.

Harvick’s playoff hopes likely came to an end with 11 laps remaining in Sunday’s Round of 12 elimination race at the Charlotte Motor Speedway Roval.

The No. 4 Stewart-Haas Racing Ford missed a turn, locked up a tire and ran straight into the wall. The car set aflame and ended up on the hook after Harvick exited under his own power.

Chase Elliott’s No. 9 Hendrick Motorsports Chevrolet was behind Harvick before his mistake. The two had a brush-up earlier in the final stage, which left Elliott’s car with severe damage.

Kevin Harvick’s No. 4 Stewart-Haas Racing Ford turned Elliott early in the final stage on Lap 55, and the Chevy smacked hard into the wall and needed major repairs on pit road. The right rear was hurt the most, but really, the entire rear end was smashed.

Harvick’s shot into Elliott’s back bumper on Lap 55 appeared to be retaliation for the Sept. 18 Night Race at Bristol Motor Speedway, where, in Harvick’s view, Elliott cost him a victory by taking his line in the late stages of the race—after Harvick had run Elliott into the outside wall and cut a tire on the No. 9 Chevrolet.

Asked whether his intent was payback for the Bristol race, Harvick said, “Sometimes real life teaches you good lessons.”

Elliott entered Sunday’s cutoff race nine points above the elimination line. He won Stage 1 earlier on Lap 25. He was second at the end of Stage 2 on Lap 50. That gave him a playoff point and 19 stage points. 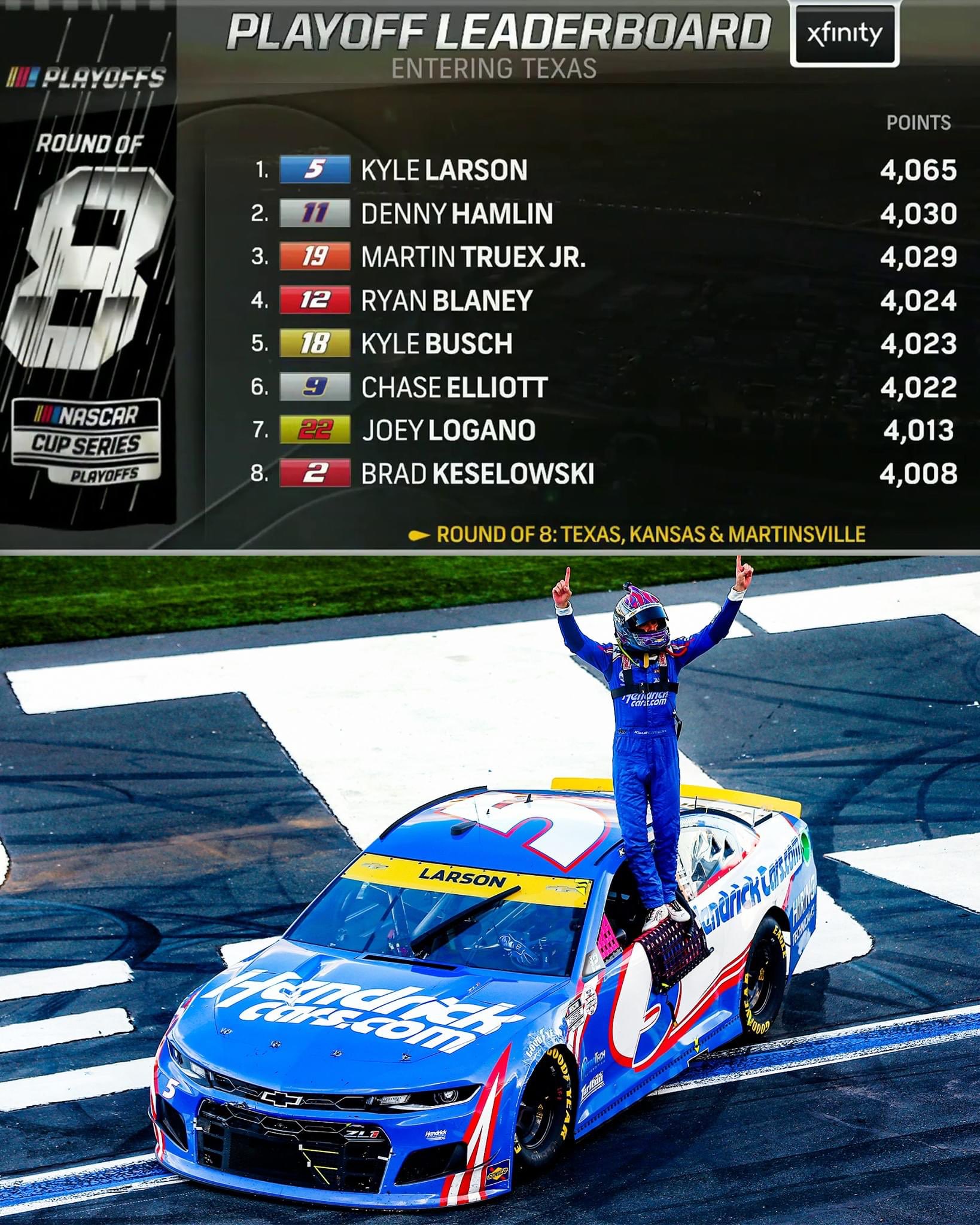 THIS WAS A BATTLE-TESTED WIN FOR THIS RACE TEAM TODAY. IF I HAD TOLD YOU IN THE MIDDLE OF STAGE 2 WHEN THEY WERE CHANGING ALTERNATOR BELT, THAT YOU WOULD WIN THIS THING, WHAT WOULD YOU HAVE SAID?

“I wouldn’t have believed it, that’s for sure. I don’t know. I didn’t even feel that good early. Started changing some things and they were doing a good job letting me know what to do inside the cockpit to get better. About that time, I noticed my battery was going low, so I was getting stressed out. Like man, I’m not going to get knocked out of the Playoffs like this. It wasn’t looking too good. Thankfully, everybody on our No. 5 car did a great job of staying calm. Cliff (Daniels, crew chief) as always, did a great job of communicating with me and what was going on and getting the battery changed and the alternator changed and whatever it takes to get our battery running. But man, my HendrickCars.com Chevy was good. William (Byron) was obviously really good. It’s a bummer to see that not work out for him. But I think the No. 9 (Chase Elliott) ended up making it, so that was some great perseverance by that team, too. So, it’s just awesome to be with Hendrick Motorsports and glad to get another win and I’m looking forward to the next round a lot.”

WERE YOU AWARE THAT AT TIMES TODAY, YOU WERE BELOW THE CUTLINE AND GOING TO MISS THE NEXT ROUND?

“Yeah, I obviously had a pretty good idea. I’ve gone through it a few years ago in the No. 42 and when you think you’re good, then all of a sudden, you’re running like 40th. And you’re like well, I’m down below the cutline. I knew I was going to have some sketchy moments. I just had to pick my way through traffic and stay calm. We had some good restarts there at the end and I was able to kind of use my tire advantage to get under Denny (Hamlin) and kind of squeeze some real estate off of No. 4 (Kevin Harvick) there. It was fun racing with Tyler (Reddick). He’s one of the best there is. I don’t like racing him because he’s so good and so hard to race and pass. So, it was just a fun race there and a lot of craziness all day long.”