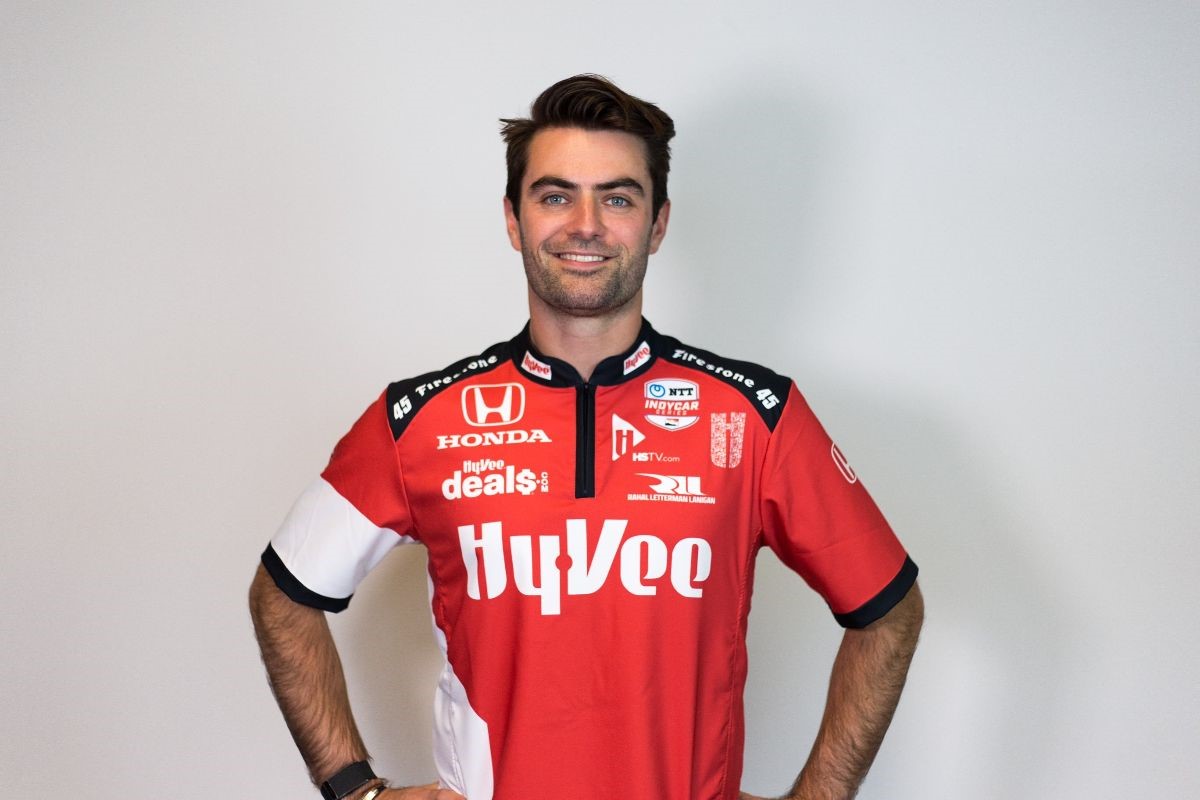 Hy-Vee, Inc., an employee-owned supermarket chain that operates more than 285 retail stores across eight Midwestern states, has been the primary sponsor of the No. 15 and No. 45 entries for 11 races with the team since 2020, and will expand their program to become a full-season primary sponsor of the No. 45 entry beginning in 2022 in a multi-year agreement. They will also be a team-wide associate sponsor.

In 2022, Harvey will begin his third full season in INDYCAR. His best start to date is second place in the 2021 Firestone Grand Prix of St. Petersburg and his best finish is third in the 2019 Indianapolis Grand Prix. In 2021, he earned four top-five starts with a best of second place on the Indianapolis road course and earned six top-10 finishes with his best coming at St. Petersburg and Portland of fourth place.

The 2022 NTT INDYCAR SERIES season begins with the Firestone Grand Prix of St. Petersburg on February 25-27. The 17-race schedule includes the Hy-VeeDeals.com 250 on Saturday, July 23, and the Hy-Vee Salute to Farmers 300 on Sunday, July 24 – both at Iowa Speedway. Hy-Vee will provide broad support for the doubleheader event through a wide-ranging partnership that will bring INDYCAR racing back to the 0.875-mile Iowa Speedway, located near their headquarters in Des Moines, after a one-year hiatus. For more information about the series or team, visit www.indycar.com and www.rahal.com.

JACK HARVEY, Driver of the No. 45 Hy-Vee Honda: “I’m incredibly excited to be joining Rahal Letterman Lanigan Racing. I’ve been working towards this moment for my entire career and I’m so honored and thankful for the trust Bobby, Mike, David and Piers (Phillips, president) have placed in me. Hy-Vee has massively committed to elevating INDYCAR as a series and I’m honored to be representing their brand on track in the No. 45. I’m eager to get to work with Graham and the entire team. We have common goals of competing for wins and championships, and I’m confident we’ll be contending from the drop of the green flag next year.  This is an exciting next chapter, and I can’t wait to see what lies ahead.”

RANDY EDEKER, Hy-Vee’s Chairman of the Board, CEO and President: “Our ongoing partnership with Rahal Letterman Lanigan Racing continues to be a success. Over the past two years, we’ve enjoyed being a part of a sport that continues to see its fan base grow substantially year after year. Now, as we look ahead to the 2022 NTT INDYCAR SERIES season, we look forward to hosting our own doubleheader event at the Iowa Speedway and seeing the No. 45 Hy-Vee Honda take the track in the nationally televised event.”

BOBBY RAHAL, co-owner of Rahal Letterman Lanigan Racing: “I can’t tell you how pleased I am to welcome Jack to our team. I first heard of him during his time in Indy Lights. He has a great record of success over the years in all forms of racing so I’m pleased that he agreed to join our team. He and Graham will work well together and be a strong foundation for our driver lineup that will raise not only the level of each driver individually but of the team as a result. I respect and appreciate his commitment and work ethic to racing on and off the track which is so key. And I also respect the way he deals with people – friendly and respectful. I think we’re going to have a lot of success together and I very much look forward to having him with us.”

MIKE LANIGAN, co-owner of Rahal Letterman Lanigan Racing: “I have heard nothing but good things about Jack and I think he will work well with our driver line up. I think its important that they mesh well together, and I know Graham has a lot of respect for him. He has shown a lot of potential and we’re looking forward to building on that. We welcome him to the team.”