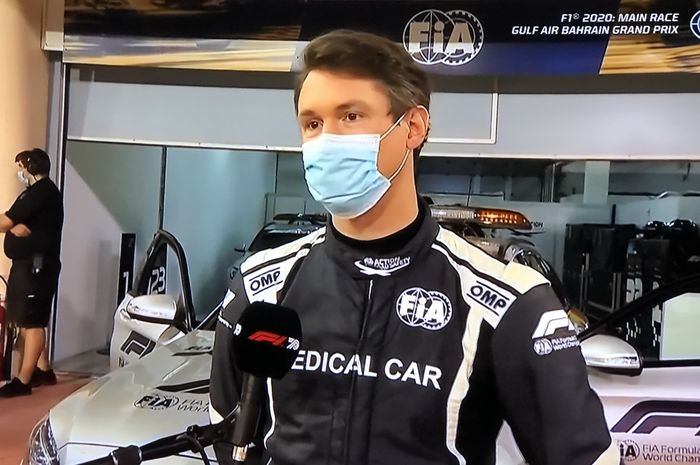 (GMM) F1’s regular medical car driver will not be permitted into some of the countries set to host the final grands prix of 2021.

In Turkey, the official medical car occupants Alan van der Merwe – the driver – and Dr Ian Roberts had to sit out the race after testing positive to covid.

But in the days afterwards, South African van der Merwe went public to reveal that he is not vaccinated and therefore may have to skip several more races.

“From what we understand, there are a couple of countries where you will probably not be allowed to enter unless you are vaccinated,” F1 race director Michael Masi now confirms.

“From that perspective, the FIA obviously has to respect the requirements of each country that we visit, which includes all of the teams and everybody else.”

It is believed van der Merwe will therefore have to sit out the forthcoming Qatar, Saudi Arabia and Abu Dhabi grands prix.

He and Dr Roberts were replaced in Turkey by Formula E’s regular medical car crew.

“Both Alan and Ian were available all weekend on the other end of the phone to help Dr Franceschini and Bruno Correia with their acclimatisation to this role,” said Masi.

(GMM) The career of F1’s regular and long-time medical car driver is on the line over his stance about covid vaccines.

Alan van der Merwe, who has driven the medical car at grands prix full-time since 2009, missed the most recent race in Turkey due to his second covid infection.

But now he stands to miss even more races in 2021 because of his decision to forgo a covid-19 vaccine – which is now a requirement for entry to many countries.

“For the avoidance of doubt, if you want to get vaccinated, do it. I’m pro-vaccine for those that want and can have them,” the South African former racing driver said.

“A difference of opinion is absolutely fine, and the point of a discussion. Hate, racism, personal attacks, being told I will hopefully die, trying to get me fired etc etc will just get you blocked,” the 41-year-old said on social media.

“I’ll continue to adhere to public health guidelines, reduce risk as much as possible, and I’ll respect other’s decisions equally. There doesn’t need to be polarisation or hate involved with every discussion about masks or vaccines.”

Although South African, the former Honda test driver claims to also be “half Swiss”, and he pointed out that in Switzerland “prior infection” is counted as having taken a vaccine.

“I trust that those countries know what they’re doing, and also respect countries’ more restrictive rules and (will) not travel there,” said van der Merwe.

“Vaccines are showing to be safe and effective for the vast majority of people. But what if you’re not in the majority?” he asked. “Do you automatically need to be excluded from society?

“Should some people’s health be sacrificed for the greater good of a vaccine rollout?”

Van der Merwe said he is “fully aware” that his decision could make him “less employable” or limit his “freedom of movement”.

“That I will not choose convenience over my own health does not mean I am making decisions out of selfishness. We all just want to be healthy,” he added.