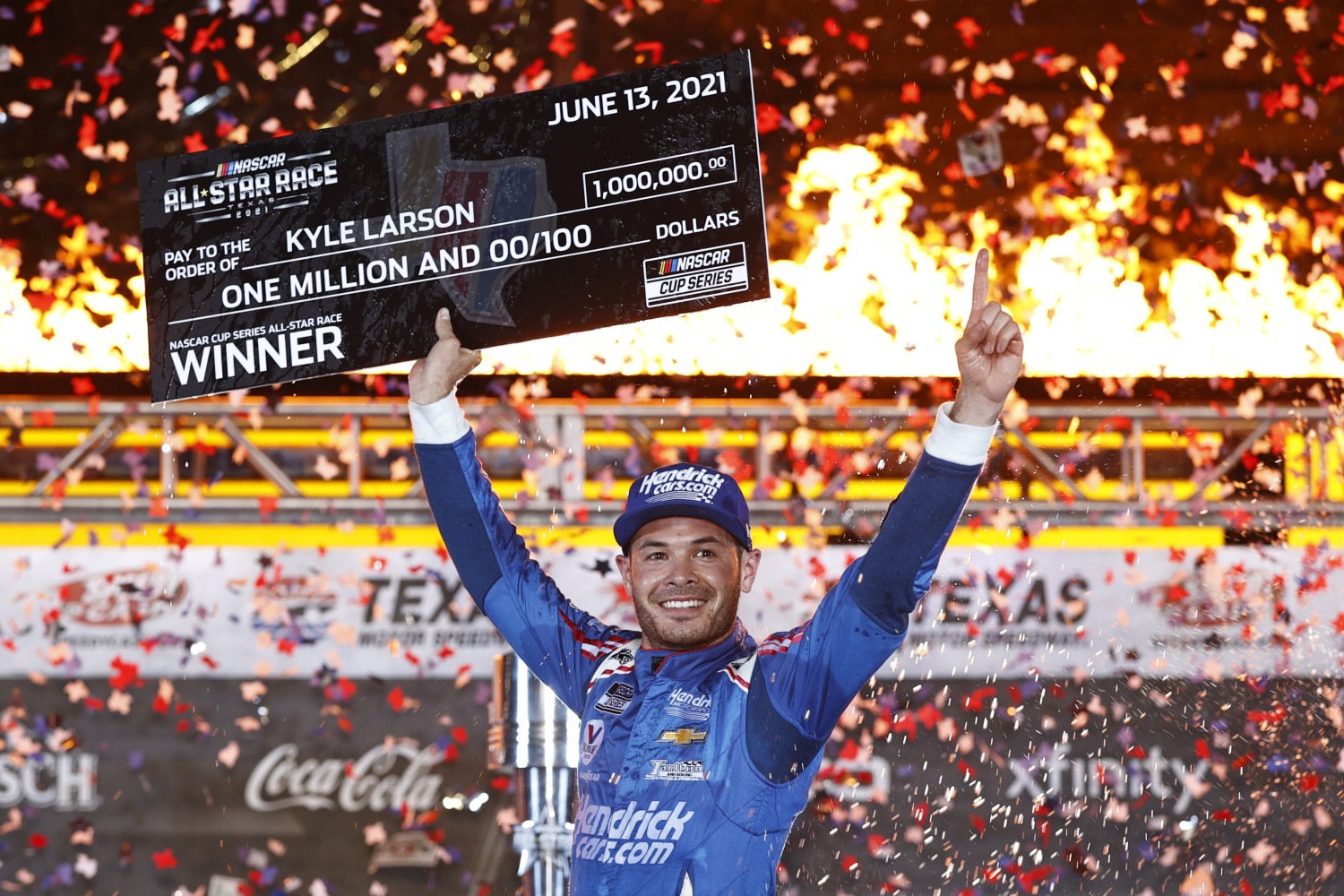 Get ready for a Texas-sized NASCAR Cup Series Playoffs weekend

The NASCAR Cup Series Playoffs point standings have re-set and the eight drivers advancing to the Round of 8 have had a sort of mental re-set as well with their season hopes now turning to Sunday’s Autotrader EchoPark Automotive 500 at Texas Motor Speedway (2 p.m. ET on NBC, PRN and SiriusXM NASCAR Radio).

With the NASCAR All-Star Race moving to the Spring Texas date, this week’s race will be the first championship points-paying race of the 2021 season on the Lone Star state’s famous high banks.

Busch, who sits fifth in the Playoff standings – one-point behind fourth place Ryan Blaney – is the winningest active driver at Texas with four NASCAR Cup Series wins. And that’s in addition to a record 10 Xfinity Series and five Camping World Truck Series victories too.

Larson, who in addition to a career best victory total (including last week at the Charlotte ROVAL), has also won the most stages (15) and led the most laps (2,011) in his No. 5 Hendrick Motorsports Chevrolet this season. But while he holds a sizable 42-point edge on the Championship 4 Round cutoff, the rest of the championship-eligible drivers are in a tight points situation.

Denny Hamlin, who is second to Larson in the Round of 8 Playoff standings, only holds a seven-point edge on Kyle Busch, who is ranked fifth the first spot outside the Championship 4 Round cutline. Martin Truex Jr., who finished runner-up to his Joe Gibbs Racing teammate Busch in in the 2021 Texas Playoff race, is only six points above the cutoff line.

Blaney trails Truex by only five points and is a mere single point up on Busch in the fourth and final transfer position. Blaney is only two points up on reigning NASCAR Cup Series champion Chase Elliott, and 11-points and 16-points ahead of his Team Penske teammates, Joey Logano and Brad Keselowski, respectively.

Interestingly, the top three average finishes at Texas among the Playoff drivers belong to Busch (10.9), Elliott (12.0) and Logano (13.4) – all currently ranked below the cutoff line. The worst average finish among this group of eight championship-eligible drivers belongs to Larson (19.7).

“We’ve been good on the intermediate tracks this year and we have two to start this round,” Larson said of Texas and next week’s Kansas Speedway race.

“We weren’t as good as I would have liked at Texas, but we were able to get the victory in the All-Star Race. And we led a lot of laps at Kansas, so we are looking forward to getting back there. We ran top five at Martinsville (Va.) and that is a track where I don’t have much success but feel positive about it because of how we ran in the Spring.”

Elliott, who has already equaled his career best mark of top fives (13), is eager to get back on the right side of the Playoff line. His crew chief Alan Gustafson leads all active crew chiefs in Playoff wins (12) – a mark second all-time to Hendrick Motorsports’ Chad Knaus (29).

“Texas, obviously, has been a real tough place for us,” said Elliott, who has only a pair of top-five finishes in 10 previous starts at the track.

“I feel like the good news is we had a really good run there at the All-Star Race for the first time since the re-pave, so that was really encouraging. Sometimes you’ve got to be careful about having a good run and going back because it doesn’t always work out. The way we’ve performed at all three of the upcoming tracks earlier in the year, I feel like we can go and have a shot to win at any of them really.”

It will be worth keeping an eye on Kevin Harvick, who was eliminated from the Playoffs last week at the Charlotte ROVAL but not before some heavy contact with rival Elliott. As does Busch, Harvick is a winner in all three NASCAR national series at Texas – with three Cup wins, five Xfinity Series wins and a Camping World Truck Series victory. And when it comes to the Fall Playoff race, Harvick’s three wins is most in the field. Only Busch (2020) and Hamlin (2010) have won Playoff races here among the current Playoff drivers.

NASCAR Xfinity Series Playoffs Round of 8 kicks off at Texas

The NASCAR Xfinity Series begins the second round of the 2021 Playoffs with Saturday afternoon’s Andy’s Frozen Custard 335 at Texas Motor Speedway (3 p.m. ET on NBC, PRN and SiriusXM NASCAR Radio) and the championship standings – from top to bottom – are mighty close heading into the final three-race run to set the title-eligible foursome.

With his victory last weekend, his third straight at the Charlotte ROVAL, in the final race of the opening Playoff Round, Regular Season Champion A.J. Allmendinger takes a six-point lead over reigning series champ Austin Cindric into Texas. Veteran Justin Allgaier and 23-year-old Noah Gragson are 29 and 33 points back, respectively, currently in those top four transfer positions.

Burton and Cindric are the only previous Texas winners entered this week. Burton is the defending race winner, taking the lead from Gragson (who led a race high 43 laps on the afternoon) on the final turn of the final lap of last Fall’s race – one of the most dramatic finishes of the entire season.

“This is the one that slipped away from us last year,” said Gragson, driver of the No. 9 JR Motorsports Chevrolet. “It could have locked us in to Phoenix to race for a championship, but we lost it on the last lap.

“We need to go out and have another good run and be towards the front in both stages and hopefully we can fight for the win again at the end. It’s all about points and trying to stay as far ahead of the cutline as possible while making no mistakes.”

Gragson has been particularly good in the 10 races on intermediate tracks this year, earning a victory (Darlington, S.C.) and eight top-10 finishes. He’s scored top-10 finishes in eight of the 10 races immediately leading into Texas and led laps in seven of those.

Burton, 21, has proven that win was no fluke. He has top-10 finishes in three of his four Texas starts. He comes into the weekend, however, hoping to up his game. Burton has an impressive 20 top-10 finishes (more than championship leader Allmendinger), however, he’s winless on the season and has only a single top 10 (10th at Las Vegas) in the three Playoff races to date.

“I can’t wait to get this next round started beginning this weekend in Texas,” said Burton, driver of the No. 20 Joe Gibbs Racing Toyota.

“We have three really great tracks coming up for us in this round and I’m looking forward to the challenge. I love racing at Texas. It’s one of the most challenging places we go each year.”

Certainly the drivers currently in Playoff positions are expecting a challenge. Allmendinger’s sixth-place run in May in the No. 16 Kaulig Racing Chevrolet in his only Xfinity Series start at the track. His best finish in 20 NASCAR Cup Series races at Texas is 10th-place – twice.

Cindric has six top-10 and five top-five finishes in seven starts, including that win in last year’s Spring race. The driver of the No. 22 Team Penske Ford has finished fourth or better in the last four races and led laps in each of those. Coming into Texas, Cindric has earned top-10 finishes in five of the last six races and been runner-up (both times to Allmendinger) at Bristol, Tenn. and last week’s Charlotte ROVAL road course race.

Allgaier, driver of the No. 7 JR Motorsports Chevrolet, has had his challenges at Texas. In 22 starts, he has only three top-five finishes, however his career best showing was a runner-up just this Spring. He’s currently on a run of eight top-10 finishes coming into Texas, including a runner-up effort at the Playoff opener at Las Vegas three weeks ago.