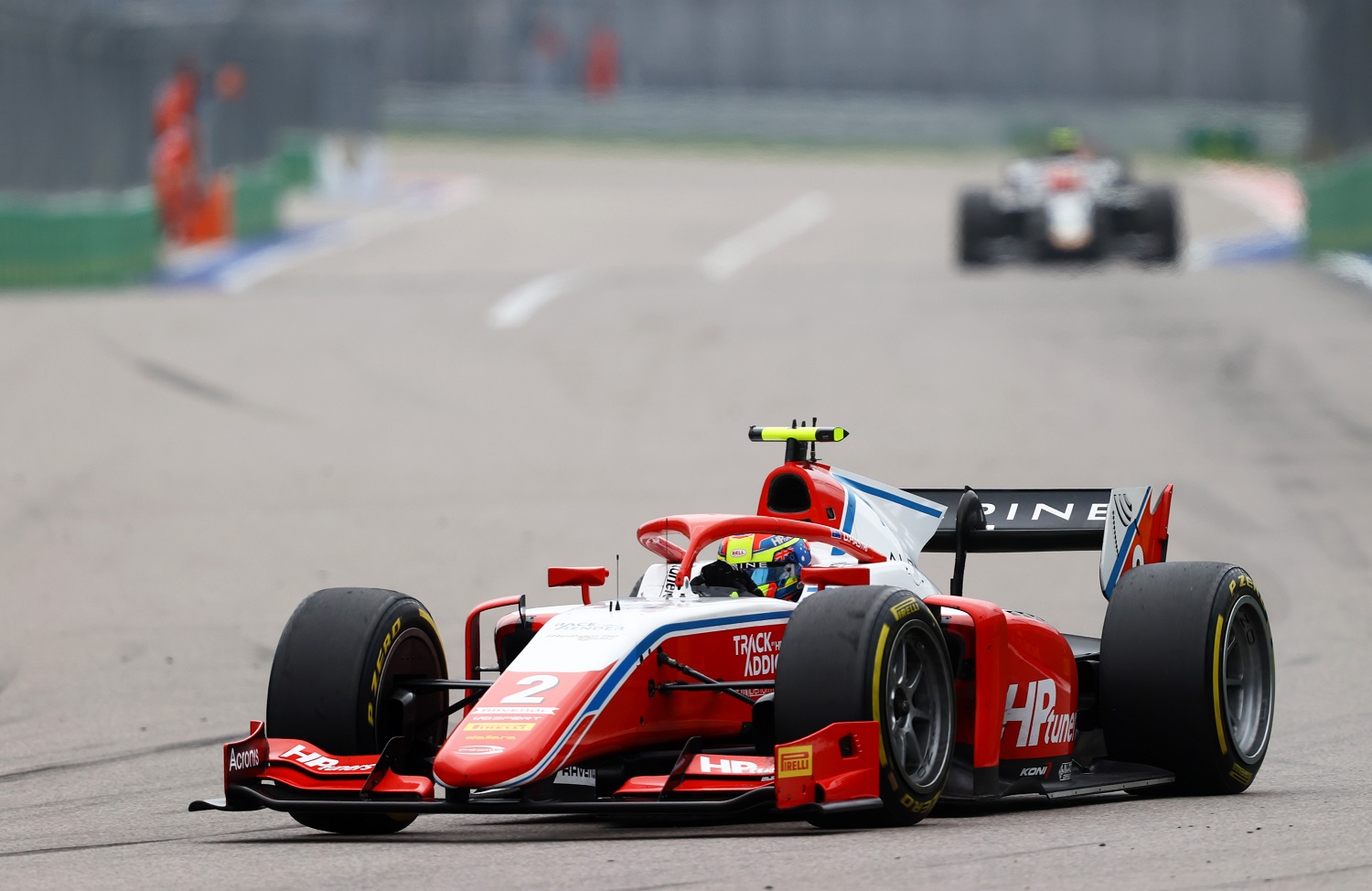 The 2022 FIA Formula 2 Championship calendar has been confirmed today. It will comprise a total of 14 rounds, all support events of the FIA Formula 1 World Championship. As announced earlier, each round will be made of two races, which means that there will be a total of 28 F2 races in 2022, making it the most sizeable calendar since the launch of the Championship back in 2017.

The season will again kick off at the Bahrain International Circuit on 18-20 March, with the second round a week later at Jeddah on 15-27 March. The campaign will resume in Europe at Imola, Italy on 22-24 April, followed by Barcelona, Spain a month later on 20-22 May, back-to-back with Monaco on 27-29 May. 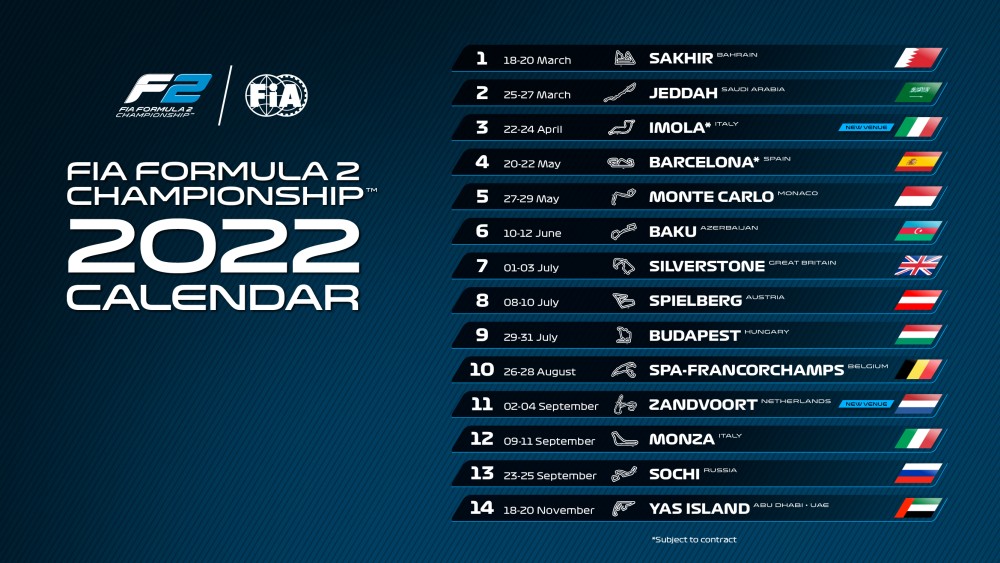 There will be one round in June, at Baku, Azerbaijan, from the 10th to the 12th, whilst the month of July will be busy with three race weekends, starting at Silverstone, UK, on 1-3 July. The following week, the paddock will travel to Spielberg, Austria on 8-10 July. Round 9 will take place at the Hungaroring in Budapest on 29-31 July.

There will be a triple-header after the summer break, which will begin at Spa-Francorchamps, Belgium on 26-28 August. Zandvoort in the Netherlands will follow on 2-4 September, while Monza in Italy on 9-11 September will conclude three busy weeks. The final two rounds of the season will be hosted by Sochi, Russia on 23-25 September, and by the Yas Marina Circuit in Abu Dhabi on 18-20 November.

CEO Bruno Michel said: “I am pleased to present the largest calendar we have ever had in Formula 2, with 14 rounds and 28 races. This results from a strong will from our stakeholders to have F2 race alongside as many Formula 1 Grand Prix as possible.

“A lot of circuits have expressed their interest to have our championship added to their race weekend program, but for costs reasons, we cannot increase the number of rounds more than we already have.

“This calendar will of course induce an increase in our teams’ budgets, but we will support them so that they are able to manage the extra costs.”

The campaign will open overseas at the Bahrain International Circuit on 18-20 March, on the same weekend of the first Formula 1 Grand Prix of the year and the start of Formula 2’s 2022 season. The F3 paddock will then fly back to Europe for its second round at Imola, Italy, on 22-24 April, followed by Barcelona, Spain, a month later, on 20-22 May.

The action will resume at Silverstone, UK, on 1-3 July, back-to-back with Spielberg, Austria on 8-10 July. Round 6 will wrap up a busy month at Budapest, Hungary on 29-31 July.

The 2022 F3 season will conclude on a triple-header after the summer break, which will commence at Spa-Francorchamps, Belgium on 26-28 August. Zandvoort in the Netherlands will follow on 2-4 September, while Monza in Italy on 09-11 September will end the campaign. 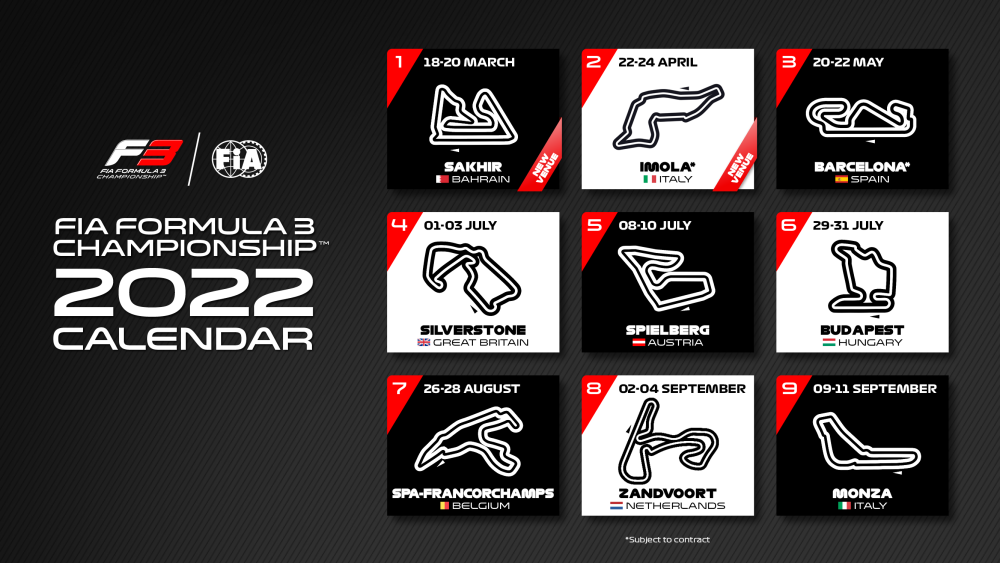 CEO Bruno Michel said: “Our 2022 Formula 3 season will start at the Bahrain International Circuit, at the opening round of the FIA Formula 1 World Championship and the new Formula 2 campaign. It will be very exciting to start all together.

“Formula 3 will be present at two more Formula 1 Grand Prix in 2022 than in 2021. It will allow our drivers to race on additional F1 tracks compared to the most recent campaign, and to be with F2 and F1 at every event.

“As we announced it last month, we will introduce a new race weekend format from next season, with two races per event, the Feature Race taking place on Sunday.”