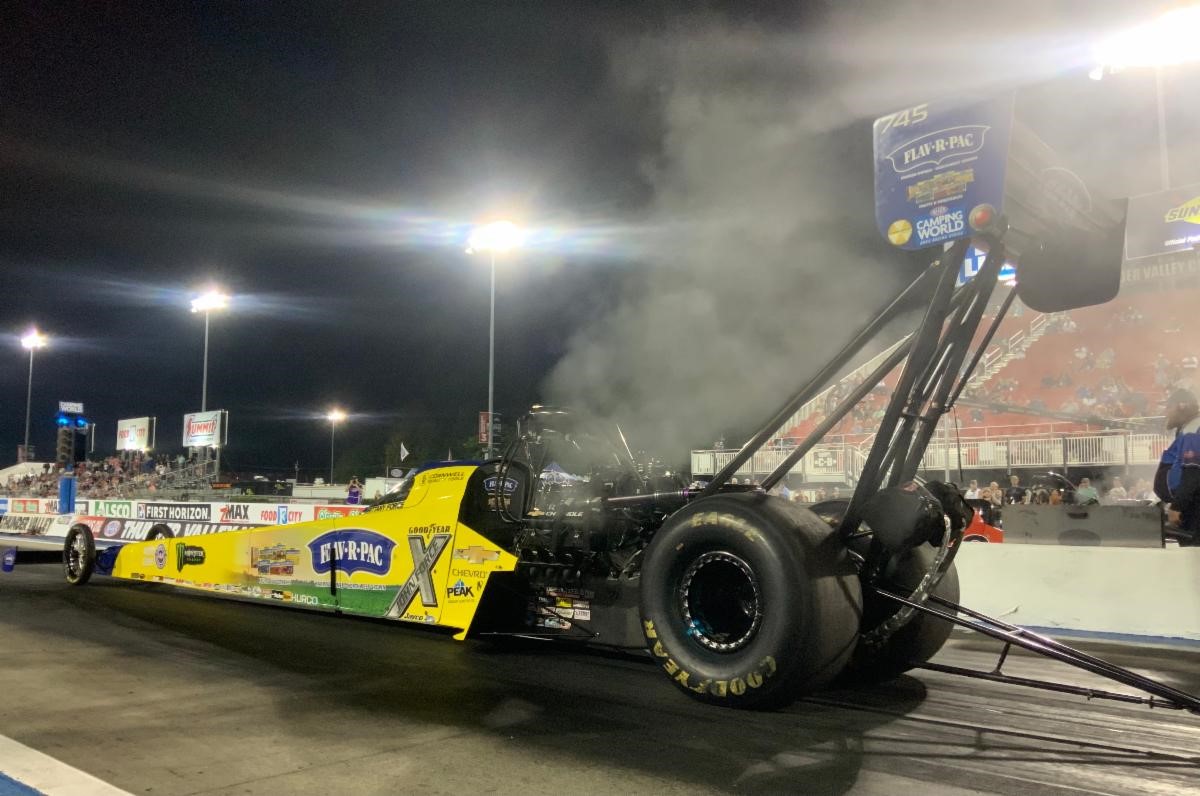 Brittany Force and the Flav-R-Pac dragster team are sitting in the provisional No. 1 spot Friday night at the NHRA Thunder Valley Nationals at Bristol Dragway. Robert Hight with the Automobile Club of Southern California and John Force with the PEAK Antifreeze and Coolant Chevrolet Camaros are currently sitting No. 2 and 3, respectively, in Funny Car.

After delays due to issues with the timing, Brittany Force and the David Grubnic and Mac Savage led Flav-R-Pac team found themselves making their first qualifying pass under the lights at Thunder Valley. Sitting No. 2 in points, the 2017 world champion would run in the final pair of nitro cars. The Flav-R-Pac team took full advantage laying down a track record 3.682-second pass at 328.94 mph.

“We definitely made a few changes in that downtime, but I try to stay out of it, it gets my head in the wrong place and I start worrying about thins so I leave that to the team and David Grubnic and Mac Savage. They did a fantastic job with whatever adjustments they did make with the sun going down and the track cooling down,” said Force who has set five elapsed time and six speed track records this season. “We made it down there. I wasn’t sure if she was going to make, it was moving around and it felt like it was going to let go but we made it to that finish line.”

Justin Ashley, who won last weekend in Dallas, is currently second thanks to his strong run of 3.726 at 329.50, with points leader and three-time defending world champ Steve Torrence a spot behind with a run of 3.727 at 323.12. Clay Millican and Leah Pruett round out the top five, with Billy Torrence, Josh Hart and Shawn Langdon all making runs in the 3.70s under the lights.

It’s been a while since Tim Wilkerson drove to a No. 1 spot in Funny Car and while he didn’t make a full run on Friday at Bristol, he’s still in a prime position to collect his first top spot since 2019 after going 3.965 at 295.27 in his 11,000-horsepower Levi, Ray & Shoup Ford Shelby Mustang. The car performed well early and though it didn’t cross the finish line at full power, it was enough to give Wilkerson the provisional No. 1 qualifier. It was a great way to open the weekend for Wilkerson, who is looking for his 21st No. 1 qualifier and is eager to finish his season on a strong note.

Robert Hight is currently second with a 3.968 at 323.50 and his teammate, John Force, who needs to have a big weekend to stay in championship contention, also ran a 3.968 at a slower 322.73. Points leader Matt Hagan didn’t register a time during his run, while Ron Capps, who won last weekend in Dallas, is currently 10th as Wilkerson, Hight and Force were the only drivers to make three-second runs on Friday.

The first time down Bristol Dragway on a motorcycle proved to be no problem for defending world champ and points leader Smith, who is getting hot again at the perfect time. With Pro Stock Motorcycle racing in Thunder Valley with championship points on the line, Smith was part of the final pair down the track and he laid down a strong 6.900 at 197.51 on his Denso Auto Parts/Stockseth/Matt Smith Racing EBR.

The class appeared in Bristol in 1999 and 2000 as part of a pair of exhibition races, but Smith wasn’t a part of those. But he made a strong first impression on Friday and is chasing his fourth No. 1 qualifier this season and 47th in his career. Of course, that run comes just after Smith won in Dallas to go past Steve Johnson in the points standings. It was just eight points heading into the weekend, but Smith continues to impress as he tries to win a fifth world championship.

Chris Bostick, who performed well in Dallas and raced to a round win, took another big step in Bristol with a run of 6.927 at 193.27. Johnson followed in third with a solid 6.942 at 193.60. Andrew Hines and Scotty Pollacheck rounded out the top five, while Eddie Krawiec is sixth after a 6.966. He’s still in championship contention, while Angelle Sampey, who entered the weekend 53 points back of Smith, struggled to a 7.262 at 169.66.

Smith also shared the provisional No. 1 spot with his father, Rickie, who went to the top in Pro Mod after going 5.834 at 248.71 in his nitrous-powered Camaro. Rickie’s name is atop the grandstands as a Legend of Thunder Valley.

Qualifying continues on Saturday at 12:30 p.m. at Bristol Dragway.