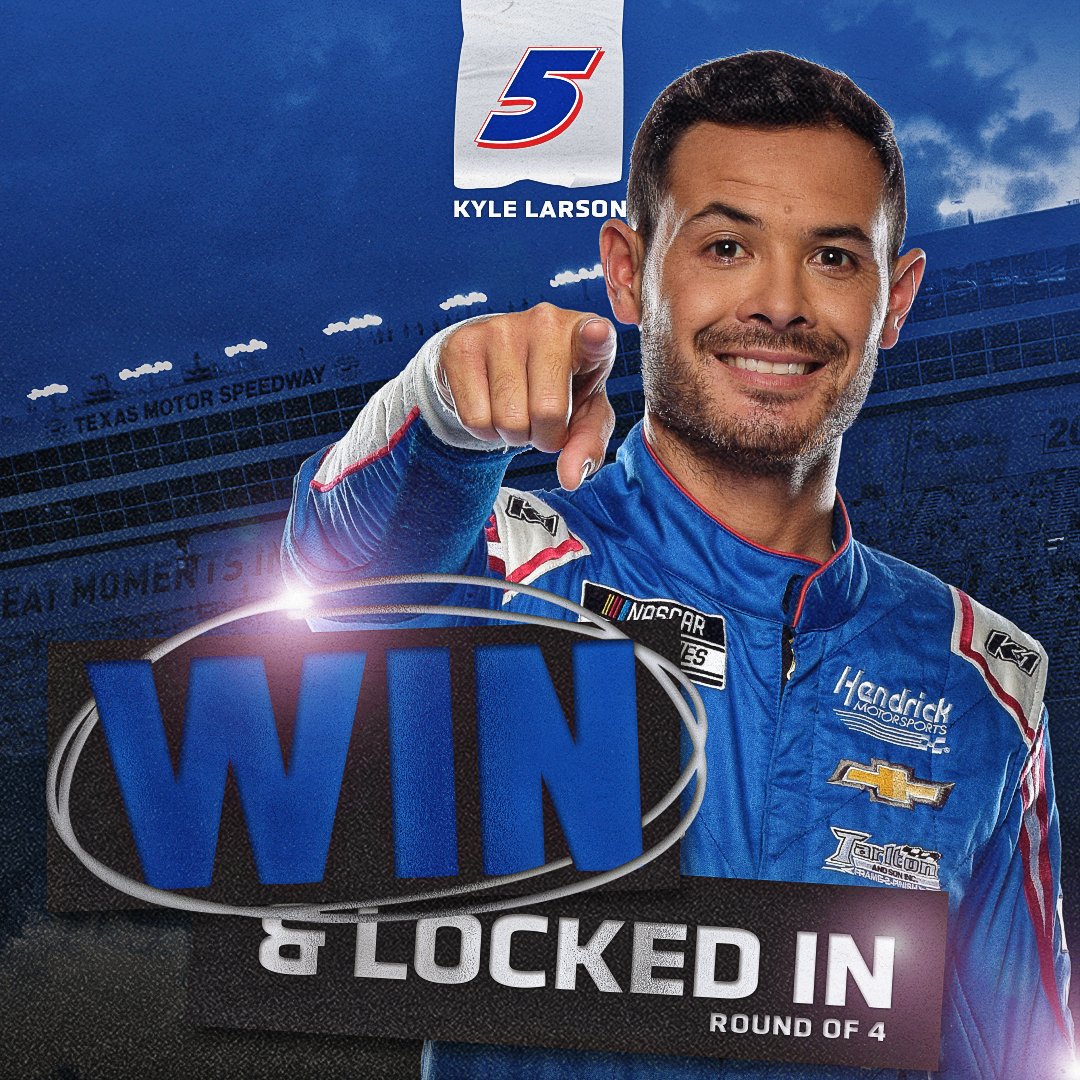 The best American driver did it again!  Kyle Larson schooled the NASCAR field for the 8th time this year and won the NASCAR Cup Autotrader EchoPark Automotive 500 at Texas Motor Speedway.

Larson led 256 of the 334 lap race in his #5 Hendrick Chevy and beat his teammate #24 William Byron by 0.459s after a 3 lap shootout following a late caution when Chris Buescher, Denny Hamlin and Chase Briscoe got together on the backstretch.

The race was the opening round of the Round of 8 and now Larson can breathe easy until Phoenix  – it is the first time in the 29-year old Californian’s career he will get to race for the NASCAR Cup Series championship trophy.

“This is unreal,” a smiling Larson said. “I knew we had a good shot to win today. Our car was amazing, probably the best 550-package, intermediate car we’ve had all year.

“This is so cool. And we get to race for a championship in a couple weeks. This is crazy.”

The #20 Toyota of Christopher Bell, at one time 2 laps down, came back to finish third, just nipping the #2 Ford of Brad Keselowski at the line.

Kevin Harvick rounded out the top-5 in the #4 Ford.

Larson had to hold off the field for 7 restarts, and he did it perfectly each time as no one was able to get around him as the inferior drivers bumped, banged and wrecked behind him.

With the win, Kyle Larson is locked into the final four playoff round in Phoenix. He also won the non-points NASCAR All-Star Race at Texas in June.

That puts Kyle Larson 54 laps led away from breaking that record.

Joey Logano absorbed the worst finish among the eight title-eligible drivers, taking his No. 22 Team Penske Ford to the garage with engine failure after completing 298 laps. He wound up 30th in the 39-car field.

That yellow flag triggered a late rash of yellow flags, including a Turn 2 spin with 21 laps left for Denny Hamlin, whose No. 11 Joe Gibbs Racing Toyota had sustained a tire rub from a brush with Ryan Blaney just two laps earlier. Hamlin’s teammate, Martin Truex Jr., was the next playoff driver to find trouble, his No. 19 entry clouting the Turn 4 wall after a bump from Daniel Suarez with 15 laps left.

Kyle Busch recovered an early pit-road speeding penalty, then slight contact in a 12-car crash to win Stage 1 with a fuel-stretching run to the break. Larson prevailed in Stage 2. 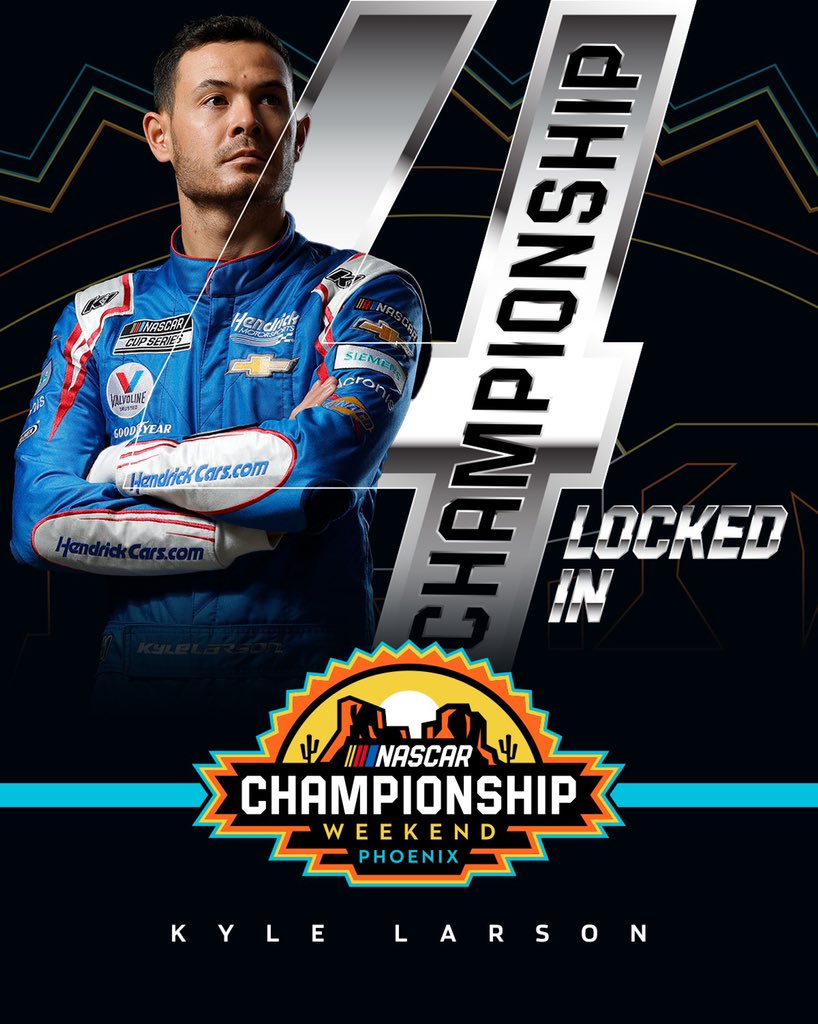 “It’s all about the push and I think here at Texas the shortest lane kind of wins out because of the way the track separates going into Turn 1, the Axalta Chevy was fast all day just never got control [of the re-starts],” Byron said. “I think he [Larson] was definitely better than us the first stage and I was right there with him the rest of the time, but it was just clean air basically.

“Congrats to those guys, Kyle really deserves it. They’ve been awesome all year, flawless on pit road and on pit calls.”

Despite all the drama, the Playoff picture remains largely the same as when the drivers started the race. Larson’s win locks him into the Championship Four. Blaney is second followed by Hamlin and Kyle Busch (who won Stage 1) among the top four positions.

“Just a bummer, what do you do, this is the first time we’ve blown a motor in a really long time,” Logano said from the garage after retiring early.

“We have to move on,” the 2018 series champion added. “It is what it is now. We can’t change it. Not many points today, so that is a bummer. We will be fighting from here.”

YOU SURVIVED SEVEN STAGE 3 RE-STARTS AND GOT IT TO VICTORY LANE. WELCOME TO THE CHAMPIONSHIP 4. THIS IS THE FIRST TIME EVER FOR YOU, KYLE

“Yeah, this is unreal. I knew we had a good shot to win today, and our car was amazing. That’s probably the best 550 package, intermediate car, we’ve had all year. So, thanks to everybody on this No. 5 team, HendrickCars.com, Rick Hendrick, this is so cool; we had a lot of people from HendrickCars here. We get to go race for a championship in a few weeks. This is crazy.”

HOW ABOUT THOSE SEVEN RESTARTS YOU HAD IN STAGE 3? YOU NEVER ONCE FALTERED. HOW DID YOU KEEP IT TOGETHER FOR ALL OF THEM?

“I just got good pushes from behind me, really. I tried to stay patient on the throttle to keep them to my back bumper. And thankfully, I was able to just barely clear them every time into (Turn) 1 and not have to fight off of (Turn) 2. So, thanks to William (Byron) and Tyler (Reddick) and Brad Keselowski, anybody who was ever behind me (laughs), especially Brad there in that last restart. So, it was just awesome to win and hope we can get some more wins throughout the rest of the year.”

HOW BIG WILL IT BE TO HAVE TWO WEEKS NOW TO GET READY FOR PHOENIX AND FOCUS ON THAT RACE AND GO RUN FOR A TITLE?

“Yeah, it’ll be cool. I don’t think we’re going to lose focus on Kansas or Martinsville, but I definitely think we can shift a little bit more to our Phoenix car, and I really look forward to that. I love the West Coast. I love Phoenix. We’ve always been fast there. At least, I was really fast earlier this year in the No. 5 and made a lot of mistakes. But I think we should have a good shot. Our team has been so strong all year long, and we might as well close it all out.”

YOU CAME UP JUST SHORT TODAY WITH A SECOND PLACE FINISH. YOU GAVE YOUR TEAMMATE, KYLE LARSON, A RUN FOR HIS MONEY TIME AND AGAIN. WHERE DID HE HAVE THAT EDGE ON YOU ON THOSE RESTARTS?

“Just control of the lanes. It’s all about the push. And I think here at Texas, the shortest lane kind of wins because of the way the track kind of separates into Turn 1. Our Axalta Chevy was fast all day. We just never quite got control. I think he (Kyle Larson) was definitely better than us in that first Stage. And then I was right there with him the rest of the time and it was just clean air, basically. But congrats to those guys. Kyle really deserves it. They’ve been awesome all year and flawless on pit road; and pit calls and everything. Our team is right there and I think we’re building something really good for years to come.”

YOU WERE ELIMINATED FROM THE PLAYOFFS LAST WEEK. WHAT KIND OF A STATEMENT CAN YOU MAKE IF YOU CONTINUE TO HAVE RUNS LIKE THIS?

“Yeah, we’re here to stay. Rudy (Fugle, Crew Chief) is going to be in it for a long time, I feel like, and we’ve got a good team; a good young team, myself included, so I feel like we can do a lot of good things. I saw that last week. Just didn’t finish it off with the contact there, but yeah this week we had a pretty good run and had a shot at a win.”