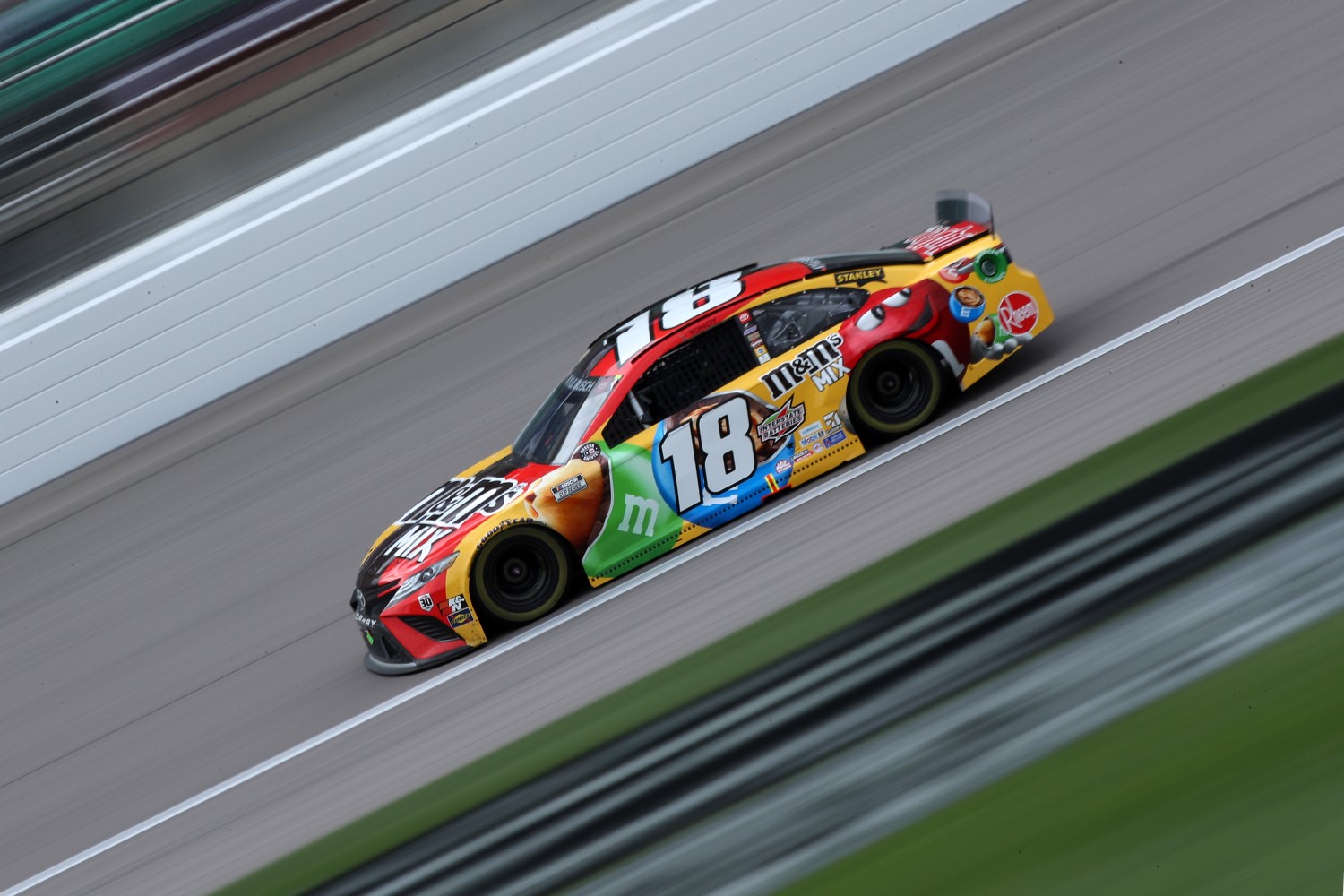 Kyle Larson put an exclamation point on his NASCAR Cup Series regular season title by earning the first of the Championship 4 positions last week with a victory at Texas Motor Speedway.

The remainder of that Championship 4 Round field is very much up for grabs. Team Penske’s Ryan Blaney, is second in the Playoff standings, but holds only a 17-point edge on the cutoff line. Joe Gibbs Racing’s Denny Hamlin is third, nine-points to the good and two-time NASCAR Cup Series champion Kyle Busch – the only former champion currently among the top four – is eight points above fifth-place Chase Elliott.

Team Penske’s Brad Keselowski, a two-time winner at Kansas, is ranked sixth, 15 points out of the top four. Joe Gibbs Racing’s Martin Truex Jr., also a two-time Kansas winner, is 22 points back and defending Kansas Playoff winner Joey Logano, a three-time winner at the track, is 43 points back.

While Larson has been a dominant force at 1.5-mile tracks – he has three wins at those venues and led a series best 1,187 laps – Kansas Speedway has been a bit of a challenge for the Hendrick Motorsports driver. He finished 19th in the Spring race there, although he led the most laps. But he has only three top-five and five top-10 finishes in 13 Kansas Speedway starts. His best finish was runner-up in the 2014 Playoff race.

Already a career year for the 29-year-old Californian, Larson has led a personal best 2,267 laps – second at the team only to Hendrick Motorsports executive Jeff Gordon, a NASCAR Hall of Famer and four-time NASCAR Cup Series champion who led 2,610 laps in 1995.

With Larson a sure-thing in the Championship 4 Round, the remaining three positions are still to be decided and the competition for them is close, the racing increasingly intense by Playoff and non-Playoff drivers alike.

Ryan Blaney’s second-place rank in the standings is his highest ever at this point in the season. But like Larson, Blaney has had challenges at Kansas. He was 21st in the Spring race there. Six times in 13 starts Blaney has finished inside the top-10 and conversely, six times he has finished 25th or worse. He has only one top 10 in his last five Kansas starts (seventh in 2020 Playoffs).

Denny Hamlin, who led the NASCAR Cup Series driver standings for 22 of the first 23 races of the season, has won three times at Kansas – tops among active drivers, a mark tied by Joey Logano and Kevin Harvick.

Busch, who won at Kansas in May, has certainly improved his record at the track in recent years. He has scored 11 of his 13 career Top-10 finishes in the last 13 races, including the pair of victories. His Playoff run has been inconsistent, however – with four Top-10 finishes and three finishes 21st or worse.

“We seem to have gotten a set-up or a hold of this place,’’ said Busch, who drives the No. 18 Joe Gibbs Racing Toyota. “Hopefully we don’t screw that up this time around and we can continue our strong runs and our fast pace of being able to have a shot to win.’’

Elliott won at Kansas in 2018 and has seven top-10 finishes in 11 starts. All four of the drivers currently below the cut-off line have won at Kansas previously and are former NASCAR Cup Series champions.

Keselowski and Truex each have 13 top-10 finishes, most among Playoff drivers, and a pair of victories at Kansas. Logano has the three wins and comes into the weekend as defending winner of this Playoff race.

“It’s obviously not the position you want to be in, but we’re not out of it,” Truex said. “We have two shots to win at tracks we’ve had success in the past. There’s an outside chance of making it on points, but you can’t count on that with how strong the teams we are racing are. At the end of the day, I’m not going to give up and our team isn’t going to give up, so we’re going to do all that we can in these next two weeks and see what happens.”

Among those not currently in the Playoffs, the veteran and former series champion Kevin Harvick is particularly good at Kansas. He also has a series-best three wins. And is coming off close runner-up finishes to Busch in May and to Logano in last year’s Playoff race – the combined margin of victory in the two races only .64-seconds. He has five runner-up finishes and a series-best 18 top-10 runs.

Playoffs’ Championship 4 is wide open in the NASCAR Xfinity Series

With only two more races remaining to set the NASCAR Xfinity Series Championship 4 Round field, Saturday’s Kansas Lottery 300 (3 p.m. ET on NBC, MRN and SiriusXM NASCAR Radio) at Kansas Speedway will play a huge role in determining who advances. And it has been an unpredictable and tough place on the Playoff drivers.

From 2016-2020 at least five of the eight Playoff drivers had some sort of big trouble in a Kansas race. Last year, Austin Cindric and Noah Gragson collided on an early-race restart and the championship-favorites finished 28th and 36th, respectively.

Three of the previous four Playoff races this year have been won by non-Playoff drivers – including John Hunter Nemechek last week at Texas Motor Speedway. The result has been tight and unpredictable Playoff standings – still led by Regular Season Champion A.J. Allmendinger; but by a mere four-points over reigning series champion Austin Cindric.

The third and fourth positions in the standings are also tightly contested. Third place Justin Allgaier holds only a four-point advantage on fourth place, his JR Motorsports teammate Gragson.

Fifth place Daniel Hemric is only two-points behind Gragson. Justin Haley is six points behind and Harrison Burton is 21 points back. Brandon Jones is 32 points out of the fourth-place transfer position, but arrives at the Kansas 1.5-miler as the only fulltime NASCAR Xfinity Series driver with a previous victory at the track – winning back-to-back races in 2019 and 2020.

Interestingly, the four drivers currently below the cutoff line bring solid credentials to Kansas. Three of the four even boast single-digit average finishes through the four Playoff races.

Hemric, driver of the No. 18 Joe Gibbs Racing Toyota, has the best average Playoff finish (3.5) of ALL the Playoff drivers – the only driver with all top-five finishes in the previous four races. He was runner-up to Nemechek last week at Texas. And Kansas has been a resume highlight. He has three top-10 finishes in four starts there and that includes two runner-up finishes (2018 and 2020).

Jones, driver of the No. 19 JGR Toyota, has an average finish of 5.75 in Playoff races this season, with a runner-up showing at Talladega, Ala. and third place at Las Vegas. He has four top-10 finishes in six Kansas starts – including those pair of trophies. And. … Jones is surely extra-motivated having just re-signed with Gibbs this week to drive another Xfinity Series season for the team in 2022.

Haley, who drives the No. 11 Kaulig Racing Chevrolet, also has a perfect four top-10 finishes in four Playoff races this year for a 6.5 average finish. He also has never finished outside the top-10 at Kansas in three starts. His best work is fourth in last year’s Playoff stretch.

Allgaier (4.5) and Cindric (4.75) are the only other drivers with Playoff averages below 10. Allgaier – a two-race winner this season – has eight top-10 finishes in 11 Kansas starts. His best work is fifth place – three different times. He has three top-five finishes in the four Playoff races, including a runner-up showing at Las Vegas, but he hasn’t led a lap in the last two races.

Cindric, who joins Allmendinger with a series-best five race win total, has struggled at Kansas. The driver of the No. 22 Team Penske Ford, has only one finish better than 25th in four Kansas starts. On the upside, he was runner-up in the 2020 Spring race, leading 131 of the 175 laps. He has three top-five finishes in the 2021 Playoffs, including a runner-up at the Charlotte ROVAL, however his last win was Aug. 14 on the Indianapolis Motor Speedway Road Course.

This will be the first Xfinity Series start for A.J. Allmendinger at Kansas since a one-off entry back in 2007 (he finished 25th).  He had four top-10 finishes in 18 NASCAR Cup Series races there as well. Although a DNF at Talladega, Ala. lowered his average finish in this year’s Xfinity Series Playoffs to 13.25, he has three top-10 finishes, including a victory at the Charlotte ROVAL.

Gragson, another two-race winner in 2021, has three top-10 finishes in four Xfinity Playoff races including a best of third place at Las Vegas and last week at Texas. That’s indicative of his season at 1.5-mile tracks, where he has six top-10 finishes in eight previous races at the 1.5-milers. He is still looking for his first top-10, however, at Kansas where his best previous showing is 13th in 2019; his first Xfinity Series race at Kansas. He won there in the NASCAR Camping World Truck Series in 2018.

The No. 54 Joe Gibbs Racing Toyota, which has 10 victories with four different drivers (including Nemechek last week at Texas), will be back in the lineup with Ty Gibbs at Kansas. Interestingly, the 19-year old Gibbs, a three-race winner in 2021 is the highest ranked non-Playoff driver despite having only 16 starts in the 30-races to date. By Holly Cain/NASCAR Wire Service