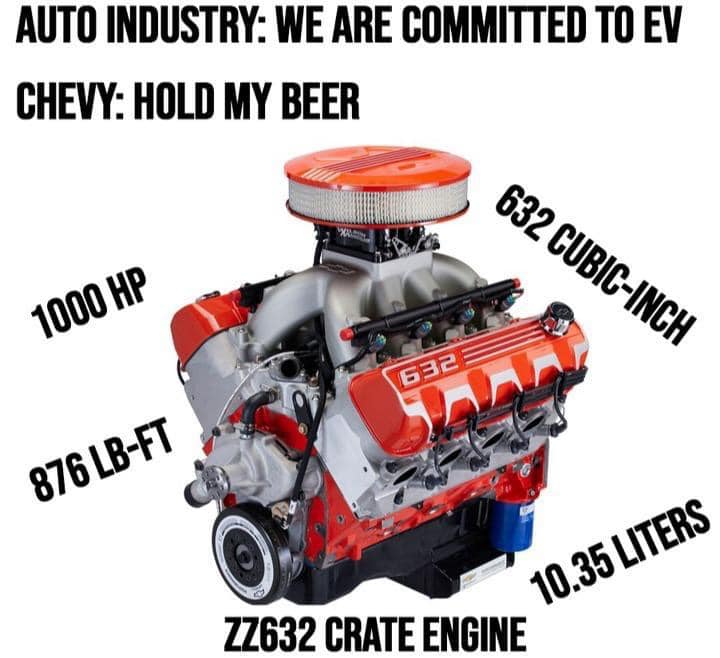 Despite saying they are going to make all their cars electric, GM Performance has announced the ZZ632/1000 a 1,000+ hp crate motor! The new ZZ632/1000, which sounds more like the name of a Terminator than a crate motor, will produce 1004 hp and 876-lb ft of torque. What’s even more impressive is that the ZZ632/1000 will be putting out those numbers naturally aspirated and on pump gas. That’s right, no turbo or supercharger will be found on this bad boy.

While 100 hp per liter may not be an engineering marvel today, delivering a crate motor that’s sized to embarrass every other powertrain installed into a production vehicle is an achievement in itself. This 10.3-liter behemoth makes the 8.4-liter V10 installed in Dodge’s Viper (rest in peace) look like it’s supposed to be fitted to a riding lawnmower. Of course, it’s also huge in comparison to literally every powertrain we’ve seen on a project car that didn’t source its parts from vintage aircraft.

This obviously isn’t the kind of motor you would buy for tooling around town. It’s specifically designed for drag racing applications, with Chevy saying the iron block endured 200 simulated runs on a dyno without a single hiccup. That’s bound to change once you hook up the necessary hardware to sync it to the wheels. But building up a car that can reliably endure the physics accessible through the ZZ632 (or a floor pan that can catch errant driveshafts) is technically on you.

The Big Block V-8 reaches peak power at 6,600 rpm and revs to a recommended maximum of 7,000 rpm. Fuel is delivered by eight port injectors with the engine breathing through CNC-machined high-flow aluminum cylinder heads featuring symmetrical ports. While Big Blocks have traditionally been designed with variations in port shape from cylinder to cylinder, all eight intake ports of the ZZ632 have the same length, volume and layout. Similarly, all of the ZZ632’s exhaust ports are identical. This symmetry ensures individual cylinders all produce similar power.

These RS-X Symmetrical Port cylinder heads are named for powertrain engineer Ron Sperry, who designed them as one of his final accomplishments in more than 50 years working on General Motors performance and racing engines. Sperry also introduced symmetrical ports to Chevy’s iconic Small Block V-8 with the Gen III LS1 engine that debuted in the 1997 Chevrolet Corvette.

The unit shares a mold with Chevrolet Performance’s ZZ572 crate engines, with the manufacturer having bored out the cylinders by 0.04 inches and lengthened the stroke by 0.375 inches. Engineers were likewise required to modify both the block and the connecting rods to make room for the larger explosions. No replacement for displacement and all that. 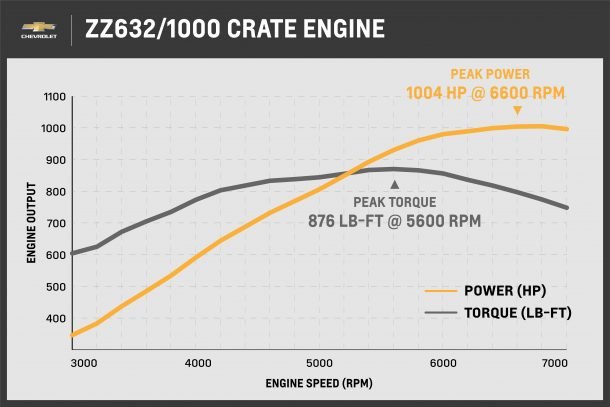 “This is the biggest, baddest crate engine we’ve ever built,” Russ O’Blenes, GM director of the Performance and Racing Propulsion Team, said upon the motor’s release. “The ZZ632 sits at the top of our unparalleled crate engine lineup as the king of performance. It delivers incredible power, and it does it on pump gas.”

Considering the similarities to the ZZ572, it probably won’t be long before we begin seeing the 10-liter big block undergoing performance modifications to see exactly how far north of 1,004 horsepower it’s willing to go. I frankly cannot wait to see how the ZZ632 compares to the Hellephant 426 Supercharged HEMI V8 (1,00o hp and 950 lb-ft of torque) offered by Mopar once they’re both sporting forced induction.

Deliveries are said to commence early in 2022. However, customers can see it for themselves from November 2nd to the 5th at the 2021 SEMA Show in Las Vegas. Pricing is TBD but it’s bound to reside well above the $16,000 General Motors is currently asking for the deluxe variants of the ZZ572/720R.