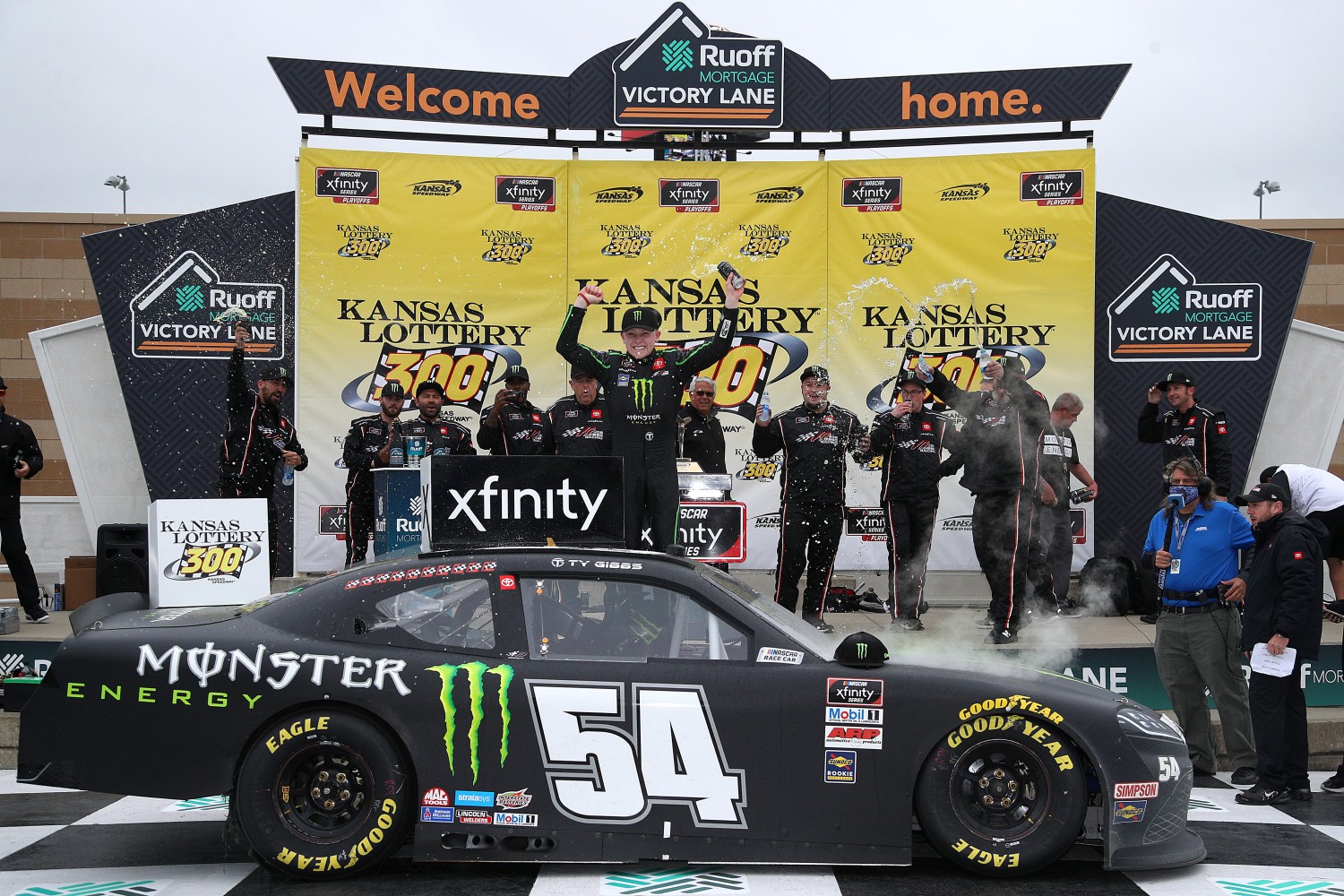 Ty Gibbs continued his phenomenal NASCAR Xfinity Series rookie season on Saturday with his fourth victory of the year in the Kansas Lottery 300 at Kansas Speedway.

Gibbs passed reigning series champion Austin Cindric on Lap 190 and 200 and beat the driver of the No. 22 Team Penske Ford to the finish line by 0.759 seconds to earn his ninth top-five finish in his 16th start.

“He got a little bit free and kind of slowed down in (Turns) 3 and 4, and I could get to his left rear and side-draft him and get away from him,” the 19-year-old Gibbs said of the winning pass.

“I got loose a couple of times over there (pointing to Turns 3 and 4), but I was just trying to give it my all, trying to come back with a win. To have four wins this year in the Xfinity Series is just unbelievable.”

Gibbs victory as a non-Playoff driver means that at least three drivers will advance to the Championship 4 on points after next Saturday’s race at Martinsville Speedway. That’s good news for Cindric and AJ Allmendinger (third Saturday), who have made a habit of swapping the series lead this year.

Cindric and Allmendinger leave Kansas 47 points above the cutoff for the Championship 4, and barring disaster at NASCAR’s shortest track, both will earn spots in the title race Nov. 6 at Phoenix Raceway.

“I feel like I could hold my own with the track position and we did a good job being consistent and not making mistakes today,” said Cindric, who won the second stage and led a race-high 151 laps to 14 for the race winner. “Maybe if I didn’t enter (the corner) as high, I could have maybe air-blocked a little better.

“The cooler it got, the freer I was getting. I thought the tire cycle would help me, but it didn’t help me. I would have loved the win to lock our way in, but it’s better than crashing out at a Kansas Playoff race like I have the last three years. We led a lot of laps but finished second, but it could have been a lot worse.”

“It was a great points day in our Odyssey Battery Ford Mustang. I really would have loved to lock our way in and race for a win at Martinsville, that would be huge for us. Congrats to the 54, Ty (Gibbs). That whole team has been on it, no matter who is in the car. They have earned it. It sucks to lose one that late in the race. Not the first time, but I didn’t spontaneously crash in the playoff Kansas race this time, so it is okay, I guess. I hate losing, but we will move on. In the bigger picture, it was a good day.”

Indeed. Cindric could have suffered the fate of Noah Gragson or Harrison Burton who wrecked out of the race on Lap 179 when a misjudged move by Sam Mayer sent Burton’s Toyota spinning into Gragson’s Chevrolet, and both cars clobbered the outside frontstretch wall.

Burton and Gragson finished 34th and 35th respectively, dropping Gragson to sixth in the Playoff standings (24 points below the cut line) and leaving Burton eighth (51 points out of fourth and needing a win next Saturday at Martinsville).

“We were fast today,” Burton said. “We felt like this was a race we were finally showing what we were capable of, and it’s been a rough couple of weeks really. I don’t know—it’s just so frustrating.”

Ninth-place finisher Justin Allgaier is nine points above the cutoff for the Championship 4, two points ahead of Saturday’s polesitter, Daniel Hemric, who recovered from a spin with Gragson on Lap 97 to finish 15th.

Gibbs came back through the field to win despite a pit road speeding penalty under caution on Lap 93 after the completion of the second stage.

How were you able to overcome some of the things you did in today’s race?

“First of all, I just want to say thank you to my Lord and Savior Jesus Christ and everybody that’s helped me – Monster Energy, Toyota, everybody at TRD and everybody at Interstate Batteries. Mitch (Covington, Monster Energy) and everyone. I’m just at a loss for words right now, this is awesome. To have four wins in my Xfinity rookie season is just unbelievable. I’m very thankful and blessed. This is just awesome.”

How patient did you have to be to make the pass on Austin Cindric?

“We had to be really patient with the way the track was and we were on the top so a lot of dirty air. We had to make sure that we could just get him a little loose with air and then side draft him and pull away. I felt like that was the best way to pass him. It was hard  because he could run the bottom and then just be completely stalled out. This is just awesome. I’ve got one more tonight.”

What will you do for the next hour before your ARCA race?

“I don’t know, it’s not an hour, I think it’s quicker than that. I’m probably going to have some peanut butter and honey sandwiches and some bananas and some Monster Energy to keep me awake. Just thank you again, thank you everybody.”

What does it mean to get your fourth Xfinity Series win of the season?

“It was, you know, man what a day. First off, I want to say all Glory to my Father Above. Everything goes to him. This is awesome. I can’t thank everybody enough that helps me. Monster Energy, you know, everyone that’s a part of this deal. I am so blessed. I just want to say Thank You. This is just wonderful.”

Back to the initial question, how did you make the pass on Austin Cindric to win the race?

“Sorry, I forgot to answer your question. I’m at a loss of words right now. I just feel like he got a little bit free and slowed down a little bit in three and four and I could just get to his left rear and side draft him and get away from him. Luckily, I pulled away. I got loose a couple of times over there, but I was just trying to give it my all. Just trying to come back with the win. To have four wins this year in the Xifinity Series is unbelievable. Like I said, all Glory to the Man Above. You know, I wouldn’t be here without Him.”