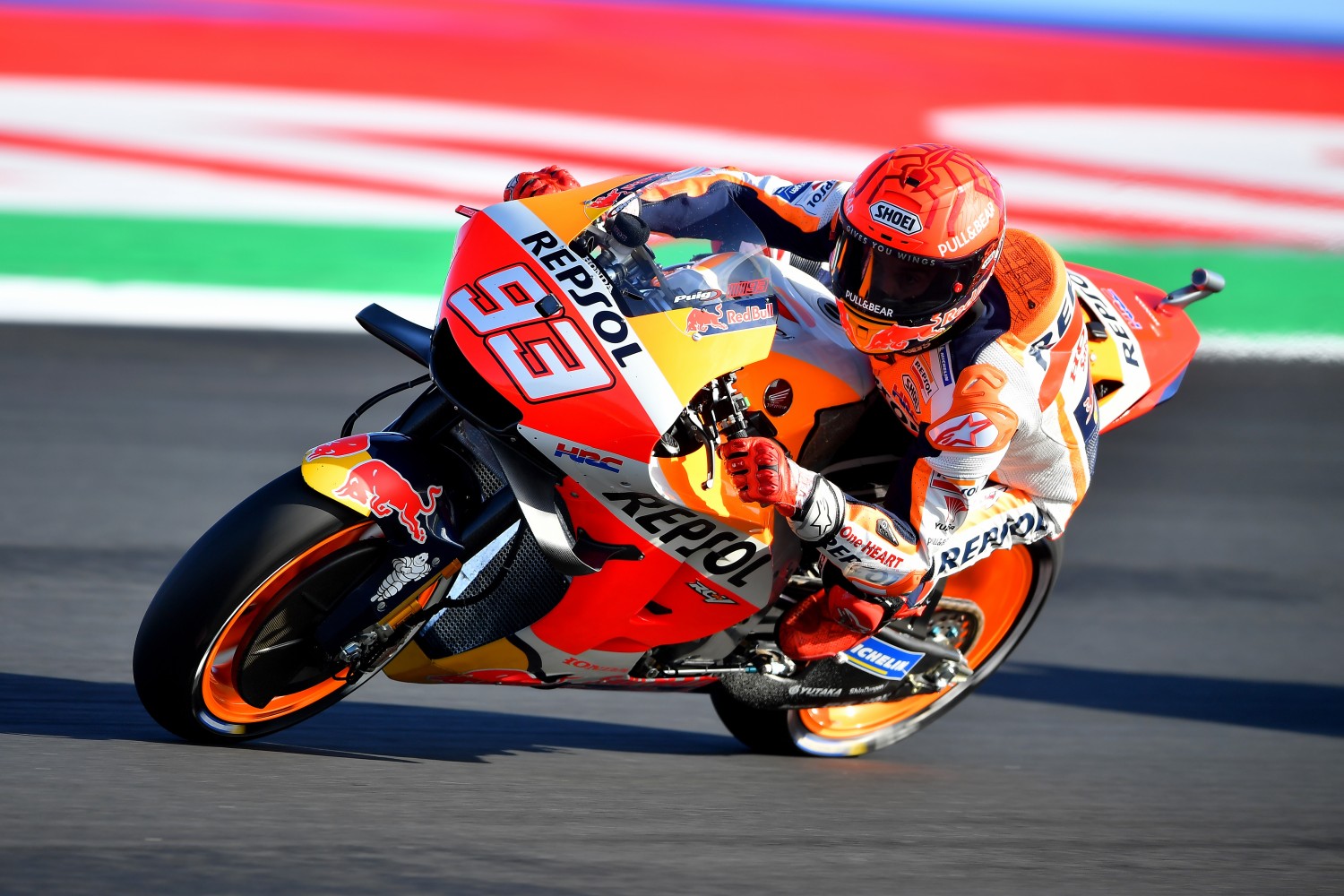 Fabio Quartararo took a well-earned fourth place, battling from 15th on the grid, and in the process the 2021 MotoGP World Championship with two races still to go. In addition, he goes into the history books as the first-ever Frenchman to win the premier class title.

While trying to fend off an in-form Marquez, and before unfortunately crashing out, Bagnaia set a new race lap record of 1’32.171, beating the record set just five weeks ago by Bastianini.

Sunday on the Italian coast marked the 450th Grand Prix race start made the by the Repsol Honda Team, following on from last race where the team achieved their 450th premier class podium. It would prove to be a fortuitous Sunday as the Repsol Honda Team went on to take a dominating 1-2 finish in the race.

Marc Marquez made another lightning start off the line and shot forward from the third row of the grid to immediately move into podium contention. A crash for Jack Miller just a few laps later left only Marquez and Misano 1 race-winner Francesco Bagnaia to push each other at the front and break away from those behind. The pair traded fastest laps as the #93 kept within a few tenths of the Ducati for the majority of the race. In the closing laps Bagnaia looked to have the edge over Marquez who eased his pace to secure a safe second, but a sudden fall for Bagnaia promoted Marquez to the lead of the race – a lead which he maintained ahead of his Repsol Honda Team teammate to take his first back-to-back wins since the Japanese and Australian GPs in 2019.

Leading up to race day, wet and cold weather was the dominant factor of all Free Practice sessions, giving the riders and teams no chance to work on dry race set-up. Fortunately, the recent race and subsequent test here five weeks ago meant that at least they had some data to help in this aspect.

Lining up on the grid, the majority of riders chose the Medium front and Soft rear slicks – the most notable exceptions being the two Ducati Lenovo Team riders who went for the Hard front and Medium rear options, and Quartararo with the Medium rear.

Marc Marquez Winner
“This is a much more important victory than Austin. My target was to be on the podium here or in Portimao, on a ‘right’ circuit to finish the season. And we won. We won here in Misano where usually we are not strong and today we had a race pace that was super-fast. When Pecco started to push, honestly speaking I said ‘ok’ and I relaxed a bit but he crashed. Fortunately, he’s ok and we were able to take profit because he had the edge. We keep improving and this is the best way to finish the 2021 season as we prepare for 2022. When you look at the gap compared to the first race here, we’ve made a step. I also want to say a big congratulations to Fabio for his title, he has been incredible this year and he really deserves it. Today is his day but I look forward to fighting with him again next year.”

Pol Espargaro 2nd Place
“An incredible race and result, beyond just myself I am so happy and pleased for the team. They’ve worked so hard this year, and especially the Japanese staff in our team have lived a hard year away from home, so this result is for them. It’s a team result and shows the work and progress that we have made and are making. I was quite tense during the race, to make sure we could achieve this result for the team but on the final laps – everything happened, Pecco crashed, Miguel crashed, I had a track limits warning on the bike. Today is a day to enjoy as a team, as a group. It’s been a rollercoaster this year, but this result shows what we can do with more knowledge of the bike and I was feeling strong after the test. Congratulations also to Quartararo on his World Championship, he has been the reference all year and put together a great season.”