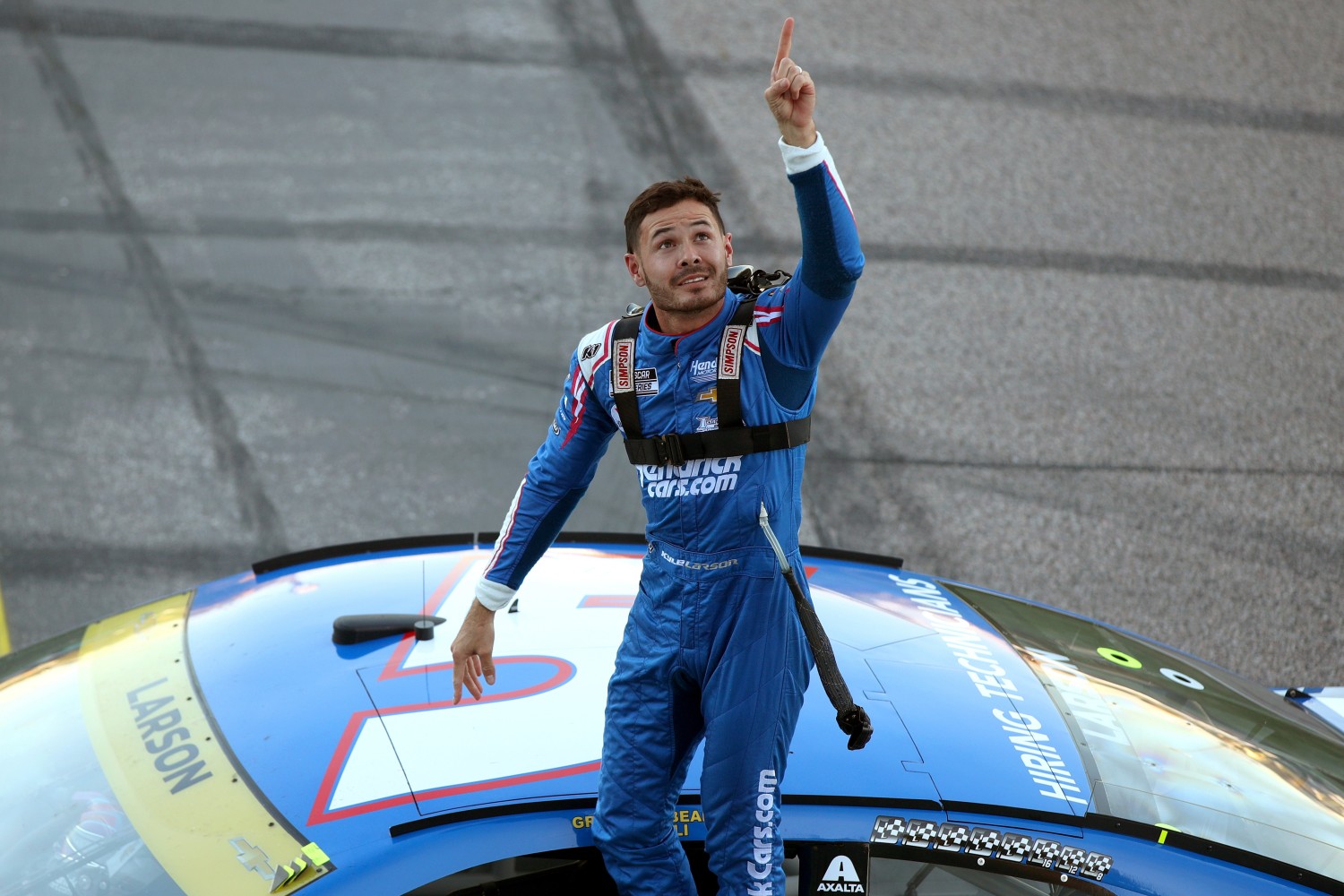 America’s best driver of this era, Kyle Larson, out dueled Hendrick Chevy teammate Chase Elliott and the SHR Ford of Kevin Harvick to win the Hollywood Casino 400 at Kansas Speedway going away, his 9th NASCAR Cup win of the 2021 season (10 if you include the All-Star race he won).

Elliott tried to run down Larson with 10 laps to go, but he tapped the outside wall three times trying to beat his more talented teammate.

Much to the chagrin of the Libtard Cancel Culture who tried to destroy his career last year, it was the 2nd time this season Larson has won three straight races, the last time any driver ever did that was 1987 by Dale Earnhardt Jr.

Larson is already locked into the final 4, and he did not have to win any more races until the final in Phoenix, but if he keeps winning, he gives no other driver the ability to be guaranteed a spot in the final 4 at Phoenix, and they have to make it on points.

As important as the milestone and positive Playoff outcome to Larson’s Hendrick Motorsports team, however, Sunday’s victory also comes 17 years to the day that the storied organization lost 10 people – including Rick Hendrick’s son Ricky and brother John – in a plane crash near Martinsville, Virginia.

“I want to dedicate this win to Rick and Linda (Hendrick),’’ Larson said. “I didn’t ever get to meet Ricky or the other men and women who lost their lives that day, but I felt the importance of this race, no doubt.

“It’s crazy how it kind of all worked out there for me to win. I know they were all looking down and helping out there with all the re-starts and stuff after getting into the wall. Again, thank you to Rick Hendrick. I know this means a lot to you and I’m glad I could get it done.‘’

“Once I hit the wall, I really didn’t have a choice, I hurt it pretty bad, but I’m really proud of the effort,’’ Elliott said. “Our NAPA team did a great job today and I felt like we had something for Kyle [Larson] there, just got the wall off of Turn 2. Just so hard to get up to him. Every few feet you get closer, the harder it gets.’’

At least six of the eight Playoff drivers – including Larson – endured some competitive drama during the competitive afternoon that saw 23 lead changes.

After a right-rear tire went down on the No. 12 Team Penske Ford with eight laps remaining in Stage 1, playoff driver Ryan Blaney was setting himself up for a solid rebound when disaster struck following a restart on Lap 224. Blaney was running in the top 10 when Austin Dillon lost control of his car in Turn 2, sliding into Blaney trying to save it. Blaney slammed the outside wall and was forced to retire from the race, finishing 37th.

Busch hit the wall again in Stage 2, sustaining more damage to the right rear of the No. 18 Joe Gibbs Racing Toyota. He finished 28th, six laps off the pace.

Notable, was the early exit for Team Penske’s Ryan Blaney. He entered Kansas ranked second in the standings. But his No. 12 Ford was hit by Dillon and sent into the wall as the two ran among the frontrunners with only 44 laps remaining. Blaney’s car was unable to continue, and he ended up 37th on the afternoon, dropping from second to fifth in the Playoff standings, one point behind Kyle Busch, who finished 28th.

“We got run into from two lanes below me,’’ a clearly frustrated Blaney said. “I have no idea (why). Obviously it hurts. Finishing 37th is not prime. We didn’t have a great day but we had did a good job of fighting back and getting back into the Top 10 but then just got wiped out when we had plenty of room.

“That sucks. It was very unfortunate.’’

Strong winds and season-pressures made for action-packed runs all afternoon. Some cars scraped the wall and could continue like Larson and Elliott, but others, such as Playoff drivers Busch, Brad Keselowski, who finished 17th, and Truex had to pit for repairs and rally back into contention or points-saving modes.

Elliott is now 34 points ahead of the elimination line and sits second in the playoff standings, while Hamlin is 32 points ahead and Kyle Busch has a one-point cushion. Despite retiring from the race early, Blaney sits just one point back.

The race was also placed on a brief red-flag period for inclement weather and lightning on Lap 12.

The Cup Series heads to Martinsville Speedway for the Round of 8 finale on Oct. 31st.

YOU HAVE GONE TO VICTORY LANE NINE TIMES NOW THIS YEAR, INCLUDING THREE IN A ROW. WHAT IS THE SIGNIFICANCE OF WINNING THIS ONE, 17 YEARS TO THE DAY AFTER A TRAGEDY IN THE NASCAR COMMUNITY FOR HENDRICK MOTORSPORTS?

“Yes, I want to dedicate this win to Rick and Linda (Hendrick). I didn’t ever get to meet Ricky (Hendrick) or the other men and women who lost their lives that day, but I felt the importance of this race, no doubt. It’s crazy how it kind of all worked out there for me to win. I know they were all looking down and helping me out there with all the restarts and stuff after getting into the wall. Again, thank you to Rick Hendrick. I know this means a lot to you, and I’m glad I could get it done. It’s cool to get another win and I don’t really know how that happened but, our HendrickCars.com Chevy was really fast. I thought we were like a third-place car, really. William (Byron) was really good. I hate to see that unfortunate luck there again for that team. They’ve been really, really strong. I’m glad we could capitalize and get another win. I hope we can go to Martinsville and get a clock.”

YOU HAD DAMAGE ON THE LEFT REAR AND THE RIGHT REAR AND A LITTLE BIT OF DAMAGE EVERYWHERE. YOU WERE MAD AT YOURSELF FOR A RESTART MIDWAY THROUGH THE RACE. WAS IT THAT DETERMINATION NOT TO LET THAT HAPPEN AGAIN THAT GOT YOU THE WIN TODAY?

“Well, not really. I kind of forgot about that early. I felt like I did an okay job trying to hold those guys off as long as I could, on older tires. But yeah, and then I just got a little too impatient, and the race was kind of closing down in the end. I got loose off of (Turn) 2 and got in the wall and thought for sure my chances of winning were done. But I had a couple of good restarts that worked out for me. The No. 4 (Kevin Harvick) got to the No. 9’s (Chase Elliott) inside at the flag stand and kind of choked that lane up and got me clear to the lead. Had to do some blocking there, and Chase was really fast at the end. So, I’m glad I didn’t have to fight him too much.”

“Really proud of the effort. Our entire NAPA Chevrolet team did a great job today and I felt like we had something for Kyle (Larson) there. Just got the wall there off of (turn) two. It’s so hard to get up to him when you are running the fence like that. It’s just tough because every few feet you get closer, the harder it gets. It was a lot of fun. I’m really proud of the way we ran today. I feel like it was a really nice step in the right direction.”

HOW DID YOU KEEP YOUR CAR IN SUCH GOOD SHAPE?

“We had a really fast car first off. Obviously, the restarts didn’t go great there at the end ,but we were able to climb back in it. So just really proud of the effort. These are the kind of runs that you have to have to compete for a championship. So, it’s a good time to be doing that.”

PLUS 34 GOING INTO MARTINSVILLE, WHAT DOES THAT ALLOW YOU TO DO CHASE?

“I don’t know if it allows you to do much of anything now. As you saw today, I am not sure that any amount of points is safe. I think anyone in this Round can win next week. So, we are really going to have to be on it, but looking forward to the opportunity and excited for the challenge.”