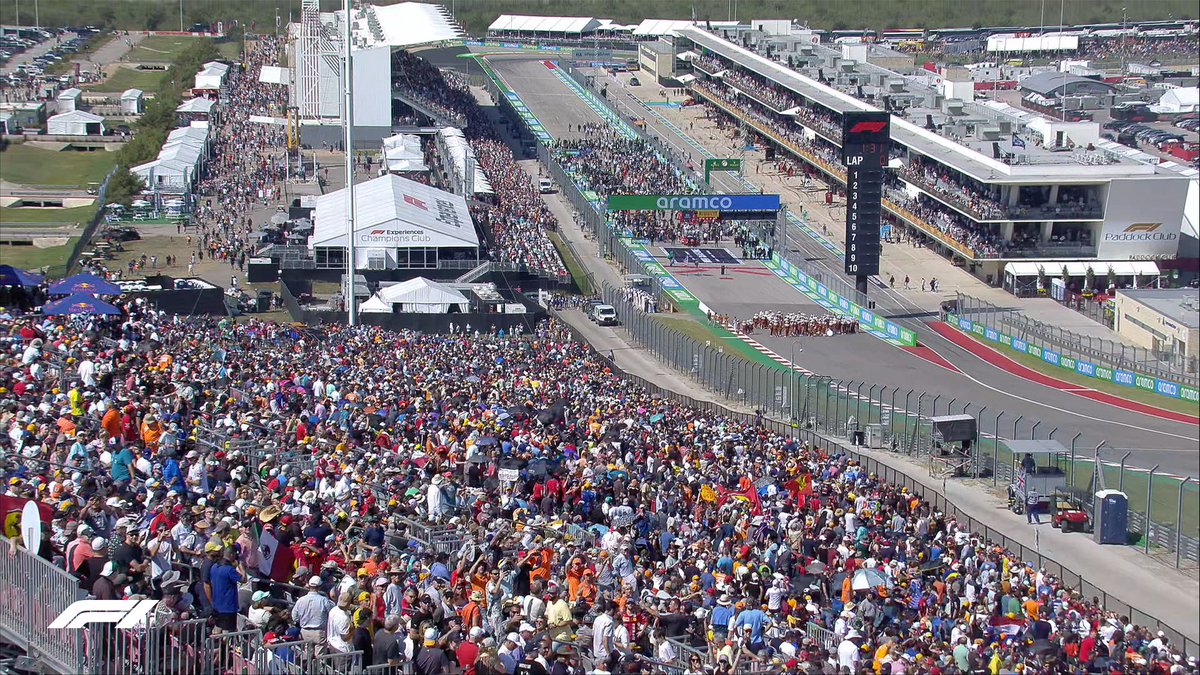 According to ESPN’s viewing figures for the event the broadcast averaged 1.2 million viewers when it was shown on ABC this weekend.

The impressive stat puts it just behind the 2007 US Grand Prix at Indianapolis as the most-viewed US race of all time. The 2007 event was broadcast on Fox and averaged 1.4m viewers.

During the race, an average of 1.5 million people tuned in to witness the action, which makes this the most viewed race of the 2021 season so far in the US. It sits ahead of the French Grand Prix and British Grand Prix, which drew audiences of 1.1 million and 1 million respectively.

The broadcast’s viewing figures are more than 40 percent higher than they were the last time F1 raced in America for the 2019 US Grand Prix.

Not only were the crowds record-breaking at COTA this past weekend for the USGP (surpassing the Indy 500), and over 1.22 million people watching on ABC, the global TV audience for the race was 111 million.

You read that right, 111 million, bigger than even the US Super Bowl at 96.4 million.

The three-day event saw 400,000 attendees, smashing a previous record held by the British Grand Prix (351,000) for the most racegoers in Formula 1 history.

While IndyCar prefers to remain a tiny domestic series, the global powerhouse called F1 is exploding.

And to think, Liberty Media also wanted to buy IndyCar and the Indy 500 and make it a global giant like F1, piggybacking on F1’s global TV reach.

IndyCar said no, leaving us wondering about what might have been.

F1 continued to see double-digit increases, this time over 1.2 million people tuned in on ABC. What is notable is that F1 drew the most viewers in the all-important 18-49 year old age group, even more than the NASCAR Cup race.

Formula One racing is gaining traction in the United States, and an emerging fan base is along for the ride. “I think there’s a variety of different contributors,”  John Suchenski, ABC/ESPN’s director of programming and acquisitions told the Washington Post newspaper. “A lot of people have asked about the Netflix series, and while there’s no way to quantify what audience Netflix brought in, it’s clearly helping.”

The broadcaster has seen a surge in viewership that Suchenski struggles to compare with those in other sports. That trend has continued this season, when F1 races on ESPN and ESPN2 averaged 916,000 viewers through the first 15 races, a 51 percent increase over the 2020 season average (608,000).

“We’ve seen a very positive progression over the last four seasons where we’ve been able each year to grow that audience by double digits — particularly this season,” Suchenski said. He added that the U.S. Open tennis tournament saw a similar trajectory before the pandemic. “But to see four consecutive years of double-digit growth, I don’t know if I could single out something that compares to that.”

Suchenski sees other factors, too.

He said he believes ESPN has made the sport more accessible to American fans who have become accustomed to finding races on its platforms on Sundays and, when they do, they’ve increasingly seen more content: more races, more race-day coverage and a Spanish-language offering.

Formula One CEO Stefano Domenicali credits both Netflix and ESPN for extending the sport’s reach in the United States, which he considers critical to its growth.

“The U.S. market is crucial for us because being a world platform, we believe the potential for the biggest growth is in the area of the U.S. For sure, [‘Drive to Survive’] has been huge in terms of positive feedback with a younger generation that were not really so interested in sport so much as the narrative of Formula One,” he told the Post.