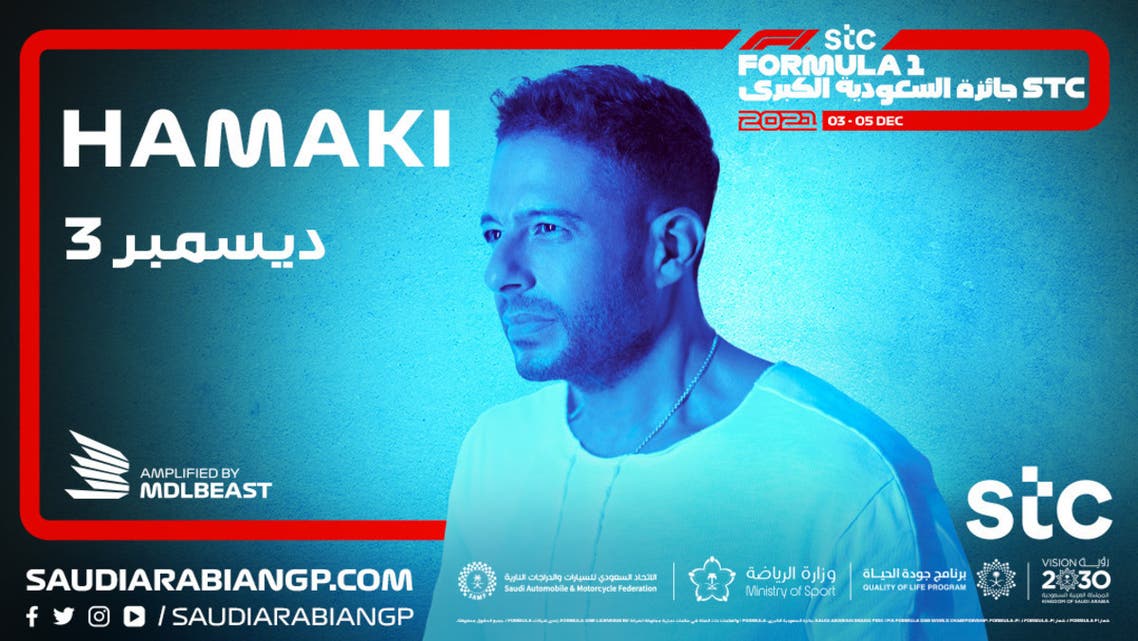 Hamaki will perform on December 3, joining a line of international stars who have been announced to perform in the three-day entertainment schedule at the Jeddah Corniche Circuit.

Mohamed Hamaki is one of the top-selling artists in the MENA region. His most recent album ‘Ya Fatteny’ celebrated its launch at Dubai’s Burj Khalifa and then proceeded to top musical charts on several music platforms.

Prior to his album launch, Hamaki was the first Arab artist to feature in Fortnite’s soundwave musical series. Hamaki was also named “Best Middle Eastern Artist” by MTV and BAMA to add to a glittering array of awards he was won throughout his career.

The Jeddah Street Circuit is a record-breaking circuit that includes the longest street circuit and the highest number of corners in the history of Formula 1 races, according to the Grand Prix.

“Designed by the world-renowned Hermann Tilke, the Jeddah Street Circuit features several Fl firsts, guaranteed to Inspire the drivers to greater speeds and produce thrilling race action. With a record-breaking 27 corners and 3 Drag Reduction System (DRS) zones for more chances to overtake, Jeddah is set to rewrite the rules of racing,” the Grand Prix website said.

The Jeddah Corniche Circuit stretches to 6.175km in length, making it the second longest circuit on the current F1 calendar behind the legendary Circuit de Spa-Francorchamps and the longest street circuit in the sport. Drivers are projected to reach top speeds of up to 322km/h as they race towards Turn 27.

All ticket holders will have free access to the concerts.