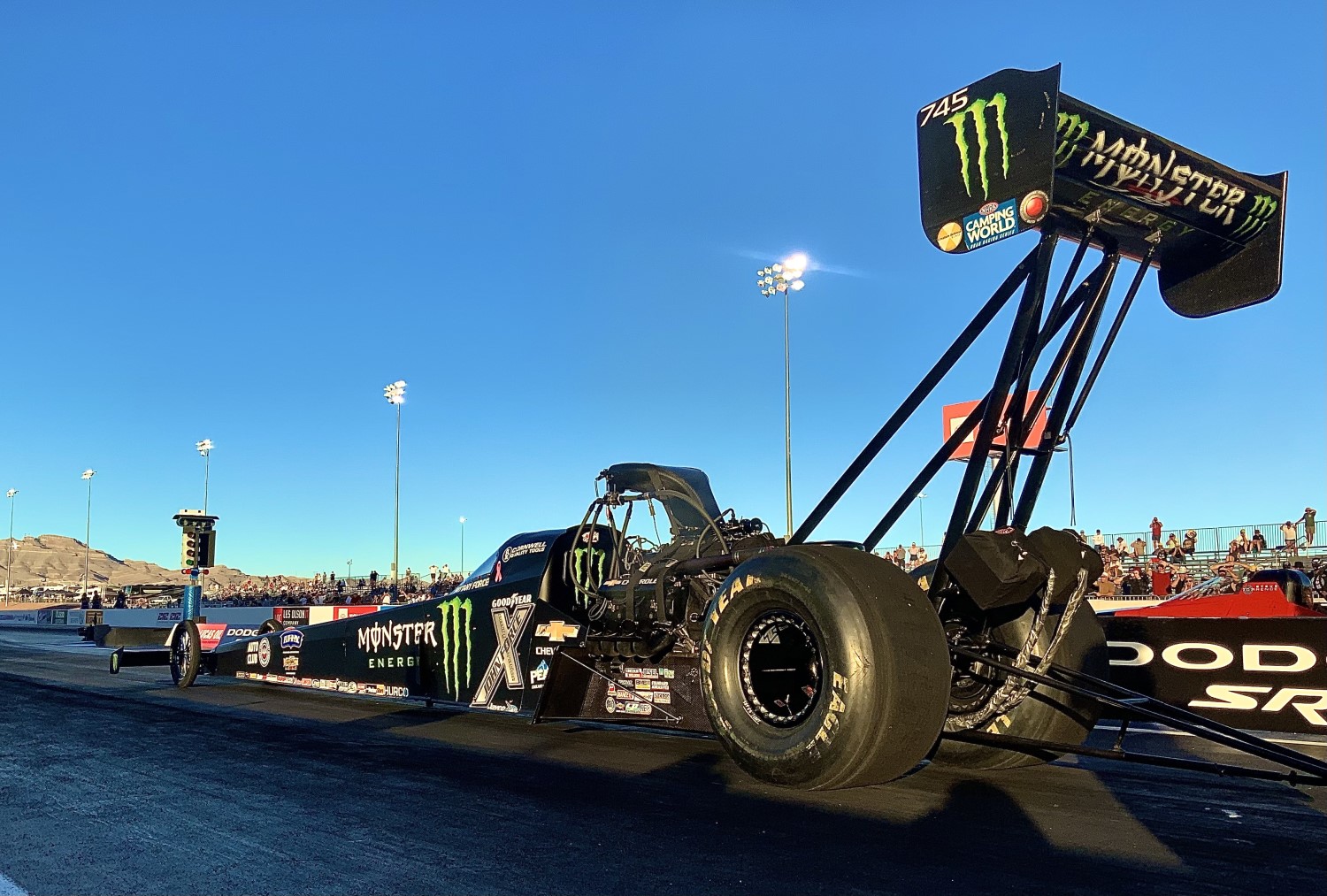 The stars of the Camping World NHRA Drag Racing Series celebrated Nevada Day on Friday with an impressive qualifying round to kick off the Dodge//SRT NHRA Nationals presented by Pennzoil and Brittany Force Alexis DeJoria, Kyle Koretsky, and Steve Johnson emerged as the early leaders  after one of three qualifying sessions.

Force, who has 11 No. 1 qualifying efforts in her ledger this year – including at nine of the last 11 events — again fronts the Top Fuel field with her David Grubnic-tuned Monster Energy dragster after a stout 3.693. The run gave her three valuable bonus points as she tries to chase down points leader Steve Torrence.

“That’s a great start,” said Force. “We’ve had success here at Vegas back in 2019. We won the event. And, you know, we just, we’re in the hunt for this thing. And that’s exciting for all of us. We’re going to throw down, we’re going to go for it. It’s not going to be easy. It’s gonna be tough.

“There’s two races left. And we’re going to grab as many points as we can. So every single run matters. We’re going to throw down every run, we can see how many points we can grab. And then it’s race day, we start all over and throw down and we’re looking for for win lights. We want to get this thing done. But we need to we need to do well, this weekend. We need to win here.”

Torrence finished fourth with a 3.771, preventing him from earning any session points. Between Force and Torrence sit Clay Millican (3.732) and recent Bristol winner Mike Salinas (3.766).

Twenty Top Fuel cars are entered in the field, ensuring that the two Saturday runs will be a slugfest as teams hunt for a spot in the 16-car field.

DeJoria and crew chiefs Del Worsham and Nick Boninfante kept the momentum rolling from their win at the NHRA Thunder Valley Nationals two weeks ago by grabbing the provisional pole in Funny Car.

DeJoria, a two-time Las Vegas winner (2014 and 2016) booted the Bandero Premium Tequila Toyota to a 3.896 to lead a field that includes eight three-second passes after the opening of three sessions.

“It’s great to come off a win and come to a track where we’ve had success before, winning here twice,” she said. “I think we’re just we’re hot right now. It’s a little late in the season, but it’ll be nice to go with a bang.

Reigning world champ Matt Hagan, who enters the event one point behind DSR teammate Ron Caps lost a chance to tie him after he qualified fourth – only the top three qualifiers in each session get bonus points — despite a fine 3.931.

Not surprisingly, the battle for the pole position in Pro Stock is extremely competitive with a lot of bumping and shuffling in the order. With one of three runs in the books, Kyle Koretsky is the leader with a 6.667 in his Lucas Oil Products/Nitro Fish Camaro. Koretsky, a runner-up at last year’s Fall Las Vegas race, entered the weekend in fourth place in the standings.

“We just gave it everything it has,” said Koretsky, who was also the top qualifier in Indianapolis. “My confidence is great. Just staging this car in Las Vegas is great; the view is awesome. We’re going to just try and gain some ground in the points this weekend and get back in it. The last time I was here in Las Vegas we had a good outing.  Since then, my confidence has improved. Now, we just want to turn on four win lights on Sunday.”

Koretsky’s teammate, Greg Anderson, is close behind following a 6.670 effort in his HendrickCars.com Camaro while Dallas Glenn is third following a 6.687 to give the KB Racing team a clean sweep of the top three spots and the six bonus points available in each session.

Anderson extended his lead to 81 points after winning the last event in Bristol. That win was the 98th of Anderson’s career, giving him the class all-time lead.

The father-son team of Chris and Mason McGaha made a pair of impressive and consistent runs with their Harlow Sammons Camaros. Chris ran 6.693 to edge 19-year old Mason but a thousandth of a second.

Other then championship contender Erica Enders at No. 4, several members of the Elite team are well down the qualifying chart including Bo Butner, Marty Robertson, Aaron Stanfield, and Troy Coughlin Jr. Their performance represents and apparent strategy to try and qualify opposite Greg Anderson in the hopes of taking the leader out early. Some may remember that the KB team has employed a similar strategy during several of their championship fights with the Elite team.

In Pro Stock Motorcycle, Johnson coughed up the points lead after a tough outing in Bristol, but he flexed the muscle of his four valve Suzuki during Friday’s opening session that was head and shoulder above most of the rest of the field.

Johnson ran a 6.848 to take the provisional pole and more importantly, add three bonus points to his score as he attempts to get back in the running for what could be his first Camping World NHRA Pro Stock Motorcycle title.

“I bumped by head in Bristol, but we’ll be okay,” Johnson said. “I made a mistake, but I’ve owned up to it. It’s hard to own stuff, but you remember from it.”