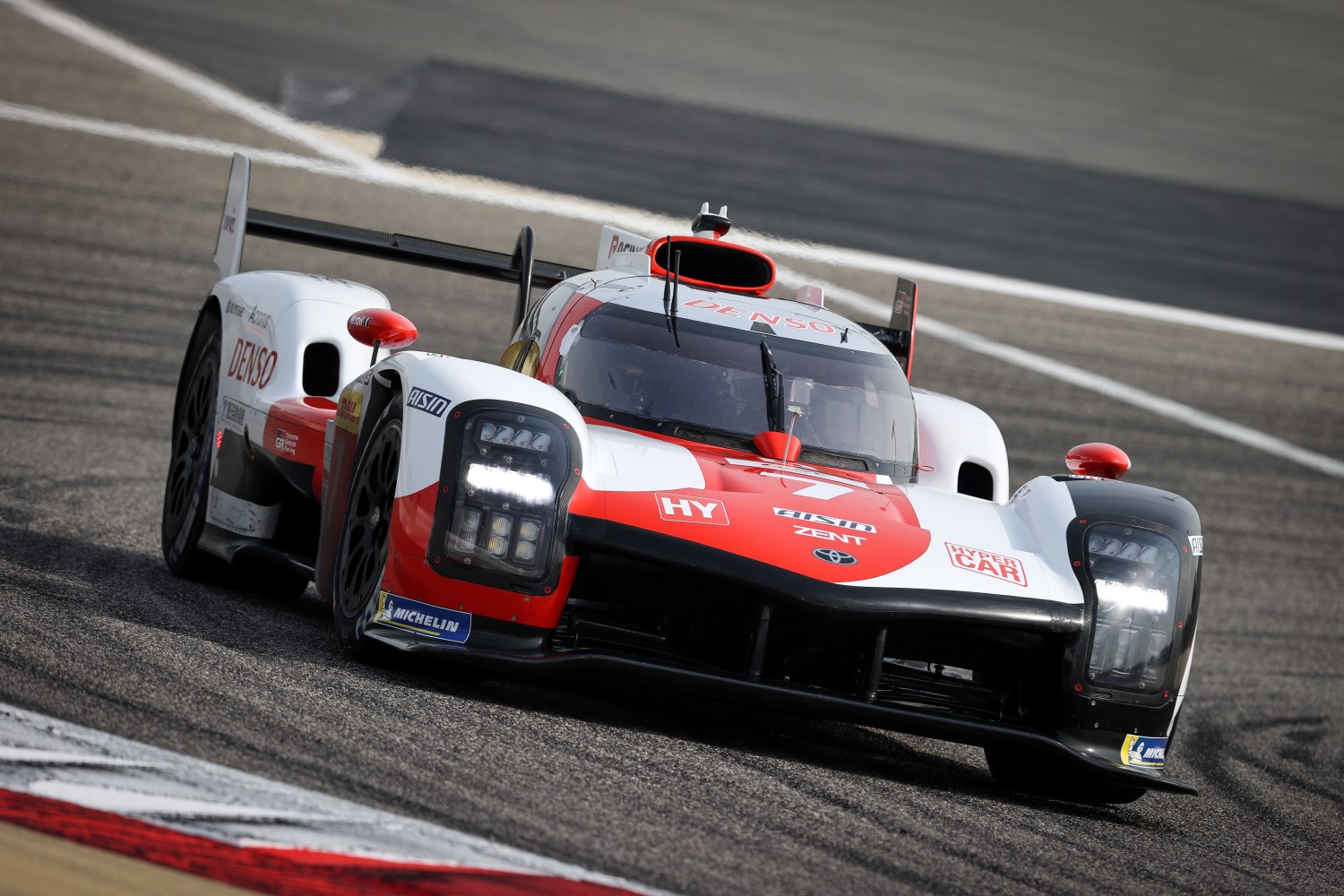 The No.7 Toyota GR010 Hybrid Hypercar driven by Jose-Maria Lopez, Kamui Kobayashi and Mike Conway took victory in the BAPCO 6 Hours of Bahrain this afternoon and made endurance racing history as the first World Champions of the Hypercar era .

In doing so, the trio extended their drivers points advantage as they chase a second WEC title.

No.8 Toyota Gazoo Racing of Sebastien Buemi, Kazuki Nakajima and Brendon Hartley placed second after losing touch with the sister Toyota after small pit-stop issues during the race.

In very hot and challenging conditions, mechanics, engineers and drivers worked intensively to earn TOYOTA GAZOO Racing’s fourth World Championship in WEC, and its third in succession. The victory also maintained the GR010 HYBRID Hypercar’s 100% winning record in 2021, with one race remaining.

Focus now switches to the drivers’ title fight in next weekend’s final race. The Le Mans-winning #7 crew moved a significant step closer to retaining the World Championship they won in Bahrain 12 months ago. Their third win of the season extends their advantage over the #8 drivers to 15 points.

Early in the race the two Toyotas traded the lead multiple times, though the swaps were orchestrated by the team as it attempted to work out which car had the outright pace to win on the day. Once the #7 took control in Hour 2 the race result never felt in doubt, and the Japanese OEM claimed the World Manufacturer’s title in Le Mans Hypercar.

The cars were closely matched and the lead changed hands several times in the early stages as the momentum swung. Eventually the #7 established itself at the front, suffering slightly less from tyre degradation on a day when all Hypercars faced the same issue.

At half distance, José led by just 10 seconds from Sébastien but the battle took a decisive turn after four hours when the #8 was delayed during a tyre change and dropped to third. Although Brendon swiftly overtook the Alpine to reclaim second, he trailed Kamui by around 40 seconds.

“Great job by all my teammates,” said Conway post-race. “All the pit stops for us were flawless, we needed to win this one. If we get pole next weekend, it’s still all to play for.” With one race to go, there is a 15-point gap between the #7 and #8 crews, with the #7 trio leading the way in the Driver’s standings.

Alpine meanwhile, finished third, a lap behind, a valiant effort from Matthieu Vaxiviere, Andre Negrao and Nicolas Lapierre not enough to challenge for the win, especially with the team forced to run shorter stints than Toyota.

Kevin Estre and Neel Jani took a third LMGTE Pro win of the season after a faultless display in searingly hot conditions at today’s Bapco 6 Hours of Bahrain.

The win means that Estre and Jani are now just a point behind James Calado and Alessandro Pier Guidi in the LMGTE Pro title fight with one round to go. Equally Ferrari has the same margin over Porsche in the GT Manufacturers’ FIA World Endurance Championship.

Porsche enjoyed its pace advantage throughout the race with the No.91 Porsche driven by Richard Lietz and Gimmi Bruni riding shot gun in second place for most of the race, largely as protection for their sister car and the drivers’ 2021 title quest.

The Porsche 911 RSR-19 cars managed its tyres expertly to lead all the way and set up an intriguing title finale showdown on the same track, over eight hours, next Saturday afternoon and evening.

In what is their debut FIA WEC season, Belgian squad Team WRT continued its fine run of form with a superb victory in the highly-competitive LMP2 field which saw plenty of action from start to finish.

It is the No. 31 car’s second straight victory after triumphing at Le Mans back in August and sees the team move ahead of the No. 28 JOTA car in the fiercely fought LMP2 title-fight as both crews are now separated by just five points.

British squad JOTA claimed a double podium with the No. 28 car driven by Stoffel Vandoorne, Tom Blomqvist and Sean Gelael making an impressive comeback after a difficult start and a spin which saw the pole-sitting car drop down the running order.

Meanwhile, the sister No. 38 car is still in contention for this year’s title after Anthony Davidson, Antonio Felix Da Costa and Roberto Gonzalez finished third – the trio 12 points adrift of their team-mates in the standings.

Anglo-American squad United Autosports USA enjoyed a close fight for third as Filipe Albuquerque battled alongside fellow countryman Antonio Felix Da Costa in the race’s closing hour. Albuquerque was eventually passed by Da Costa, however, with 18 minutes to go and was forced settled for fourth – 15s adrift of the No. 38 JOTA car.

It is still mathematically possible for United Autosports to win this year’s LMP2 championship but P4 today has made it more difficult as they now lie 25 points adrift of category leaders, Team WRT.

As has been the case all season, the LMP2 battle provided plenty of on-track action from the outset, which included a spectacular opening stint from Giedo Van Der Garde in the No. 29 Racing Team Nederland entry who briefly led the category. The team eventually finished fifth place and secured the Pro/Am honors, which they now lead by nine points over DragonSpeed USA going into the final race of the year.

Richard Mille Racing equalled its best result of the season after a solid run from Beitske Visser, Sophia Floersch and Gabriel Aubry to finish in sixth place. Floersch also did an impressive job of keeping Realteam Racing’s Norman Nato behind her in the final laps, the two cars separated by just 0.234s at the finish line.

Realteam Racing and High Class Racing claimed P7 and P8 respectively while Polish squad Inter Europol Competition finished ninth after a succession of issues including a spin on track after impact from another LMP2 car. The team lost further time as they had to return to the pits with a damaged left door.

ARC Bratislava finished P10, while DragonSpeed USA finished last after the team was knocked out of contention when Juan Pablo Montoya lost a wheel after coming out of the pits.

In the LMGTE Am category, TF Sport scored its and Aston Martin’s first win since the 2020 24 Hours of Le Mans after a finely judged victory.

Ben Keating, Dylan Pereira, and Felipe Fraga built a fine race after only starting sixth on the class grid.

But Keating, who ultimately took his second win in Bahrain, was able to make immediate headway through the highly competitive field and hand over the No.33 Aston Martin to Pereira who rested the lead from the No.98 Aston Martin Racing entry.

When Fraga took over for the final two hours he was able to first extend the lead and then defend it against first the No.56 Project 1 Porsche of Matteo Cairoli and then the No.77 Dempsey Proton Porsche driven by Matt Campbell.

The Brazilian took the checkered flag five seconds ahead of the chasing Porsches to delight the TF Sport team and reduce the LMGTE Am title chase gap to the No.83 AF Corse Ferrari trio of Francois Perrodo, Niklas Nielsen and Alessio Rovera to 21.5pts with 39 to play for next weekend.

Campbell sealed second place in the car he shares with Christian Reid and Jaxon Evans, while Cairoli came home third in the Porsche 911 RSR-19 he shares with Egidio Perfetti and Riccardo Pera.

Ferrari entrants featured in the opening exchanges at the front with the No.60 pole-sitting Iron Lynx entry driven by Rino Mastronardi leading the first 25-minutes until a gearbox issue forced the Italian to pit.

Francesco Castellacci took over at the front, but damage sustained from run over debris delayed the No.54 AF Corse later in the race.

Both of the other Aston Martin cars of D’Station and the No.98 Aston Martin Racing entered car had spells in the lead, but the former hit mechanical issues while the latter ultimately took fourth place.