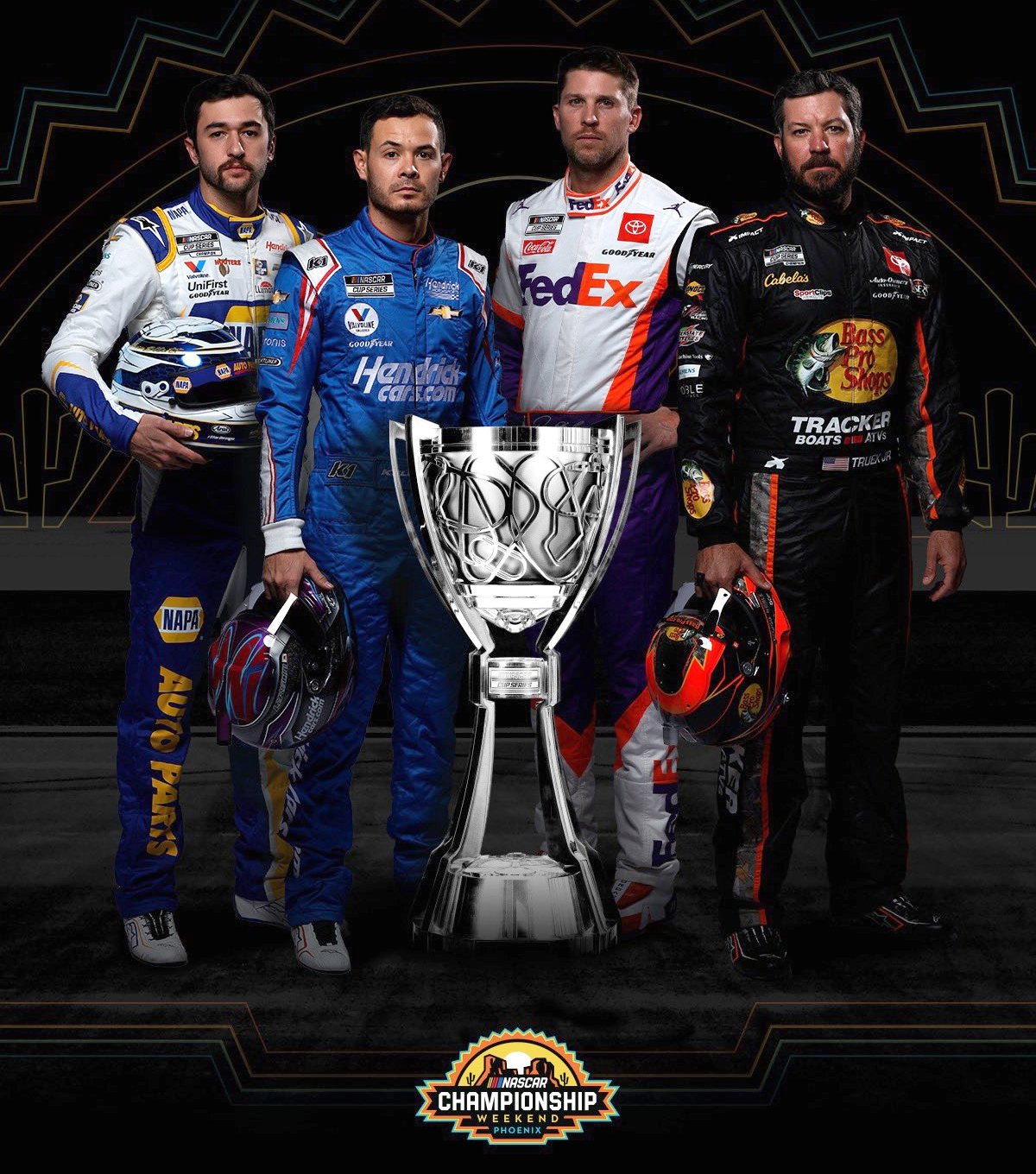 THE MODERATOR: We’ve now been joined by Kyle Larson and Chase Elliott. We’ll continue with questions.

Since you were there to hear Denny’s response, you got a teammate, there’s three other people, but the opportunity to race with Denny, also the reigning series champion.

KYLE LARSON: As Denny mentioned, the way we both performed throughout all the season, I’m glad to see us both with the opportunity to race for a championship as well as Chase and everything he’s kind of had to go through throughout this Playoffs.

Being the past champion, as Denny mentioned, I think the four most deserving teams are probably in the Final Four. I’m proud we were able to do it and look forward to battling everybody next week.

Chase, to get to this point, it certainly has been an up-and-down Playoff for you at times, what has the journey been like to have this opportunity to defend your championship?

CHASE ELLIOTT: Certainly hasn’t been pretty. At the end of the day, having a shot next week is really all that matters. Frankly, I feel like you make it to Phoenix, it’s anybody’s game.

Getting out there and being a part of the Final 4 is a really big deal. It’s really hard to do. I’m really proud of my team for continuing to push through and battle some adversity. Just keep fighting.

I got a great group. I don’t want to go to battle with anybody else. Really proud of my group for not only today but just the whole run. Our guys are on Phoenix now. We can focus on going out there and putting together a solid race which I know we’re very much capable of doing. I’m excited for the opportunity.

CHASE ELLIOTT: I mean, desperation I guess. Some people needing to win. Restarts. Guys might find themselves in a little different position than they’ve been in all day. I don’t know.

I mean, I’d say the biggest thing is just the need to win for some guys I would have to think. I’m probably not an expert either.

Chase, the contact from the 2 car, talked about desperation, is that what you expected? Is that crossing the line in a situation like that?

CHASE ELLIOTT: I mean, it’s tough. I was racing him hard on the outside. I wasn’t super surprised that he made a mistake. As hard as he hit me, I knew he just didn’t clean me out on purpose. I figure he wheel hopped or something. I haven’t seen it. Really moving on was all that mattered.

I had made some bad choices on adjustments, kind of got us behind. The real reason that happened was because I made a bad decision on what to do to our car. We started playing defense. When you start playing defense, you typically start crashing a lot of times, especially when guys need to win.

I blame myself for leading us down the wrong path more than anything. I didn’t think it was on purpose either, so all good.

Chase, I don’t know if you heard what Denny said when he was in here or not, but he said the people booing him were Chase fans, they don’t think straightly, to quote him. How does a comment like that make you feel, that he took a shot at your fan base?

CHASE ELLIOTT: I’m going to lose so much sleep tonight. I might not sleep at all, that’s how concerned I am (smiling).

My fans don’t care either, by the way.

Martin, damage on your front end, how concerned were you that it could cause a tire failure? How did you drive the thing as fierce as you did?

But ran two or three laps, the guys said it looks a lot better, it looks like it’s going to be fine. At that point your bed is kind of made. You have to stay out there and pray and hope that it doesn’t go flat. From there, we were just fighting, battling.

Got run into. Got knocked out of the groove once, put in the wall once off of two just after that. Luckily we were able to have two good restarts at the end and get in the right lanes and make up some the spots.

Definitely was worried, but luckily it held together there.

Kyle, the multiple speeding penalties, was that a product of having the speedometer set up differently? When you were on Denny’s bumper, why was that?

KYLE LARSON: Just being too aggressive, being I think locked in. You could be a little bit more aggressive. Yeah, I don’t know. Just mistakes on my part.

When I was on Denny’s bumper, that’s not where I sped either. I sped once leaving my stall and then once coming into my stall. Just was too aggressive in the corners.

KYLE LARSON: Because you want to be as close to the guy in front of you as you can to shorten the distance up.

Martin, you seemed like you could have gone through a season’s worth of emotions in the last 50 laps. Did you have time to assess everything? How important did you feel the choose decision on the last restart was going to be for your situation?

MARTIN TRUEX JR.: Yeah, it’s never an easy situation to be kind of on your last run of the race, be in one minute and out the next. You know there’s not a whole lot you can do other than drive.

Like I said, fortunately we were able to gather ourselves up there and make a pass. We actually got in a good spot before the last two cautions came. I think we were in by one point or something at that point. Luckily just able to have two good restarts.

I mean, those situations, that’s all you can do. Thinking about it, worrying about it doesn’t do you any good. You just got to try to go, hit your marks, get the most out of your race car. Luckily we were able to do that.

The last two restarts were critical, but the last one for sure. The 18 was second. If he would have got to the 48, knocked him out of the way like he did the 11, Kyle’s in or out. Needed to try to stay close to the front there. Luckily we were able to start there on the second row and hang on to that spot, which was critical.

The huge piece that was hanging off your left front, that wasn’t rubbing your tire?

You don’t see it flapping around there?

MARTIN TRUEX JR.: I couldn’t see it where it was. It was so low. Couldn’t really see it there.

I felt it when it first happened, like I said. You feel it rubbing the tire and pulling on the steering wheel real hard. The first came I came off of turn four, it about pulled the wheel out of my hand. I said something is bad wrong. Two or three laps later, you couldn’t feel it anymore. You’re worried because you knew it was rubbing at some point.

When you slammed the wall…

MARTIN TRUEX JR.: Got slammed into the wall. I don’t know. I have no idea how we finished fourth (smiling). I’m going to buy a lottery ticket on the way home.

Obviously the dominant two teams have been Hendrick and Gibbs. Talk about the dynamic between these two teams. And Chase, you talked about not having a lot of sleep tonight. What will happen if the Braves win tonight?

CHASE ELLIOTT: It would be great. Pulling for ’em, for sure. I kind of want to go, to be honest with y’all. I’d love to go home and go down there (smiling).

No, going to watch, pull for them, see what happens. Obviously like I said a minute ago more than anything just proud of my team today. Wasn’t super pretty, but we had a shot at it. That’s all that matters at this point. Looking forward to the next seven days and seeing where we stack up.

Is this round almost more hair-raising anxious, high anxiety than even next week’s race?

Explain why. Because it’s Martinsville?

Next week it’s an honor and pleasure to get to race for championships. Only four of us get to do it. It’s a fun week. It’s definitely a lot less pressure than trying to go eight to four.

Martin, were you expecting the speed that Hendrick showed?

Hopefully next weekend we can find a little bit of something, give them a run for their money.

MARTIN TRUEX JR.: Probably. I mean, they’re fast, so… I’d say they’ll be probably around there.